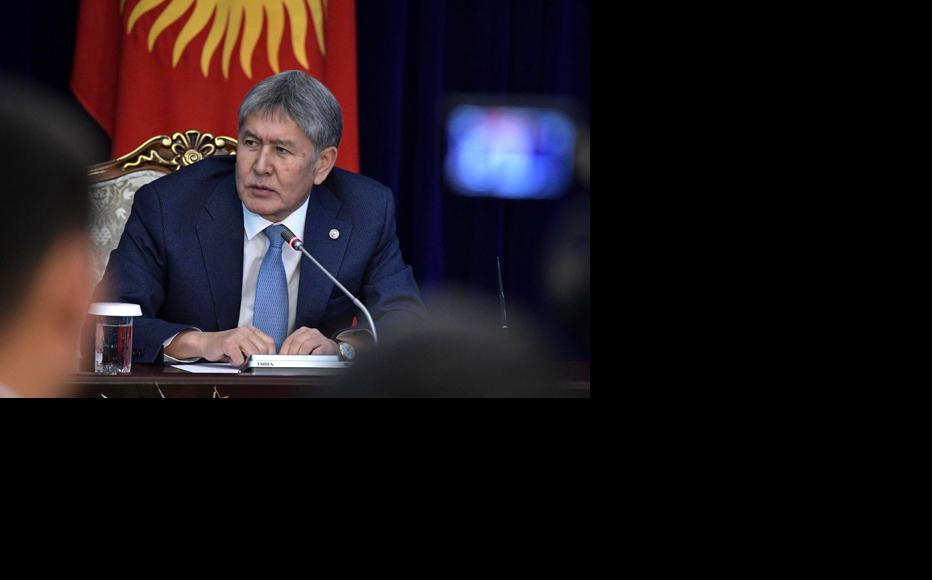 President of Kyrgyzstan, Almazbek Atambaev. (Photo: kremlin.ru)
The link has been copied

Activists are warning of threats to the country’s media freedom after President Almazbek Atambaev filed a series of lawsuits against outlets for allegedly defaming him.

Media professionals fear that the huge sums of money involved might lead to self-censorship, and say they are not convinced the courts will give them a fair hearing.

The prosecutor general has demanded 20 million soms (285.000 US dollars) from Taalaigul Toktakunova, a lawyer for the opposition Ata Meken party and Radio Azattyk, and three million soms (43,000 dollars) from other defendants including the Zanoza.kg, and 24.kg websites.

These are substantial sums in Kyrgyzstan, where the average monthly salary is about 200 dollars.

Ata Meken leader Omurbek Tekebaev, an outspoken critic of Atambaev, is currently in jail on corruption charges which supporters say are politically motivated.

Zanoza.kg, Radio Azattyk and Toktakunova are accused of publishing Tekebayev’s claims that Atambaev may have owned the cargo of an aircraft that crashed near Bishkek in January, killing 39 people.

Another lawsuit relates to a 2015 opinion piece published by the 24.kg news agency in which human rights defender Rita Karasartova alleged that the president’s Social Democratic Party of Kyrgyzstan (SDPK) had auctioned off public posts in the regions.

A separate lawsuit was filed against the founder of Zanoza.kg, well-known journalist Naryn Idinov, over an article about the alleged embezzlement of funds from the presidential foundation.

The prosecutor general claimed that all the media outlets failed to check their facts before publishing the stories.

Atambaev has made repeated public statements emphasising that journalists must be held liable for disseminating unreliable information.

“I can’t take this lying down… I am against any criminal liability for defamation, but defamers must also be held liable. At least, in terms of money, otherwise it’s useless to hope for moral responsibility. Defamers are moral morons,” Atambaev told a group of ambassadors after a presentation of credentials ceremony.

He added that the financing Zanoza.kg and Radio Azattyk receive from the West meant that it would be easy for them to pay out these amounts.

Both outlets have had their bank accounts frozen for the duration of the investigation.

Atambaev has also claimed that “regular and purposeful sweeping accusations of the head of state” were in facts attempts to destabilise the country ahead of presidential elections on November 19.

Although Atambaev is constitutionally limited to a single six-year term, at a recent press conference with Russian president Vladimir Putin he said that he now intended to remain in politics.

Others, however, see his actions as a concerted attempt to intimidate independent media.

Around 100 opposition politicians, human rights defenders and journalists rallied in Bishkek on March 18 to protest the spate of litigation.

Police made half-a-dozen arrests following the event, including a lawmaker belonging to the opposition Ata Meken party and a BBC local service reporter.

Ata Meken also hit back by filing a lawsuit against Atambaev over comments he made at a March 6 event where he described the party as "stinking".

Suing him for an insult to their honour and dignity, they said they wanted a retraction and apology rather than any financial compensation.

Rights organisation the Media Policy Institute (MPI), has taken on the legal representation for Zanoza, Radio Azattyk and Naryn Idinov.

An MPI statement noted that, according to a supreme court decision some years ago law, the media outlet was not responsible for an interviewee’s statements, when cited directly.

The same argument was made by Radio Free Europe/Radio Liberty, which stressed it had only quoted Tekebaev’s opinion.

Kyrgyzstan is considered the most liberal country for freedom of speech in Central Asia, but in recent years the authorities have stepped up pressure on journalists and human rights defenders.

Kyrgyz commentators also note that a veteran Russian journalist based in Bishkek was recently forced to leave the country.

In early March, Grigory Mikhailov, who has reported for various Russian outlets from Kyrgyzstan for over ten years, was told by police that his registration had expired and he had to leave the country.

When he tried to return, he was told his name appeared on the so-called black list of foreign citizens banned from entering Kyrgyzstan.

The ministry of foreign affairs said only that his registration had expired and that he had no official accreditation.

Mikhailov himself said that the action was taken due to the critical stories he had frequently published about Atambaev in the Russian media.

“I think this incident was related to my profession,” he told IWPR, adding that he would continue writing article on Kyrgyzstan from outside the country. “I don’t know who organised it, maybe it was an individual’s own foolish initiative or someone went overboard. I wasn’t warned, I wasn’t threatened, I wasn’t told what to write. I’m really surprised about what has happened to me.”

Media experts agree that publications need to verify facts and control the quality of information they publish, rather than serve as the vehicle of statements made by politicians.

They argue, however, that the solution is industry self-regulation rather than multimillion lawsuits.

“Freedom of expression is seriously threatened,” Tamara Valieva, the head of the Independent Union of Journalists (IUJ), told a public meeting. “There is a serious impact on the freedom of speech. This contradicts democratic values.”

She agreed that journalists had the responsibility to verify information, but argued that they could not be held liable for other people’s statements.

“There must be responsibility of the media, but not in the form of multimillion lawsuits that could lead to the closure of the media,” Valieva said.

The head of the Journalists Public Union NGO Azamat Tynaev said that he was convinced that the authorities chose popular and independent outlets to send a message to the wider media community.

Cholpon Djakupova, a former lawmaker who now heads the Adilet legal clinic, also said that she believed the move was a planned attack.

It would be difficult for the media community to unite against the legal action because “there can be no talk of the independence of courts,” she told a public meeting, adding, “I’m already feeling self-censorship here.”

Kyrgyzstan
Regime, Media
Connect with us