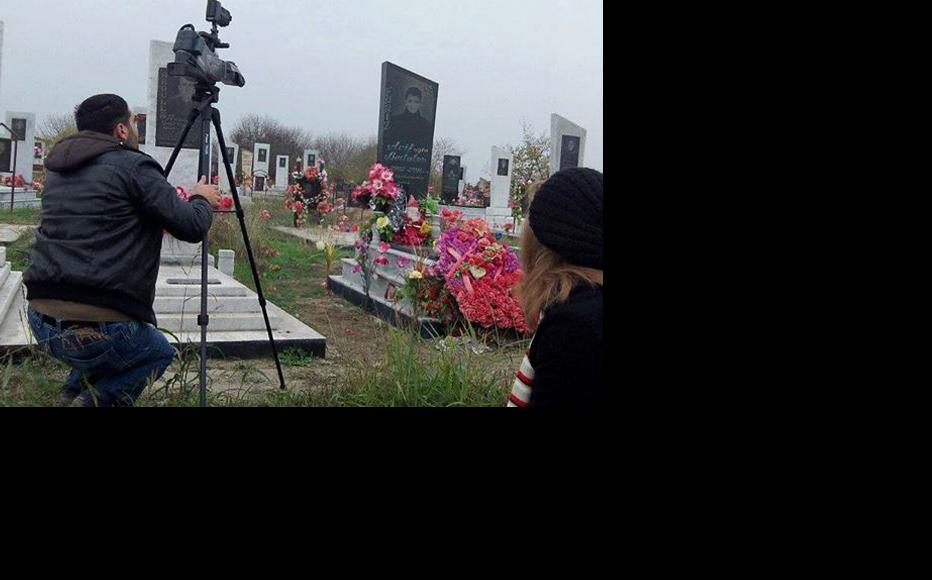 IWPR reporters in the field, in the village of Bash Garvand in Azerbaijan’s Aghdam district. (Photo: Samira Ahmedbeyli)
The link has been copied

Azerbaijani journalists who report from areas near front lines facing Armenian forces are to be subject to new restrictions. The government says this is because reporters are getting things wrong and giving away state secrets, but critics of the move say it will silence attempts to find out what is going on in under-reported parts of Azerbaijan.

Plans for stricter regulation of the press were announced by President Ilham Aliyev in August, with an order to prevent confidential information on defence matters being published in the media, including the internet. He also called for the prosecution of anyone engaged in leaking state secrets.

Finally, he instructed the government to come up with new rules to govern the way journalists are given accreditation to report from front-line areas.

Aliyev’s instructions came after a sudden rise in shooting incidents both along the “Line of Contact” which marks the boundary separating Azerbaijani forces and Armenian-held areas around Nagorny Karabakh, and also along the state border between Azerbaijan and Armenia . (See Azeri-Armenian Conflict Fears as Death Toll Rises.)

War in the early 1990s ended with Karabakh and some adjoining territories under the control of an Armenian administration, which continues to reject anything short of self-determination and separation from Azerbaijan in any final settlement. The government in Baku insists that it must regain control of these areas, which are still sovereign territory. The OSCE has led negotiations over many years on ways towards a possible settlement. But since the Azerbaijani and Armenian views of what that should entail remain poles apart, little progress has been made since the 1994 ceasefire brought full-scale warfare to a close.

The increased level of violence seen this summer has since subsided, but it seems to have left the government in Baku much more concerned about controlling the flow of reporting and other information from frontier zones.

Defence ministry spokesman Vaqif Dargahli said the president was right to be worried about national security given what he called “unprofessional, illegal activities – sometimes serving Armenian interests – on the part of some of the media, and particular internet resources and social media users”.

Alleged breaches of secrecy have also been cited as justification for a plan to make internet users register so that any comments are posted under their real names. (See Will Azerbaijan's Big Brother Plan Work for Web?.)

Afgan Mukhtarli is a journalist who regularly reports from front-line areas, and he points out that if security precautions are so poor that a reporter is able to spot an arms shipment on the move in Azerbaijan, the Armenians can probably find out about it anyway.

“I don’t think journalists need to protect defence secrets – that isn’t our job,” he said, arguing that the restrictions the government was planning were unconstitutional and contrary to international law.

Furthermore, he said, “The defence ministry conceals information on the deaths of soldiers both in combat and in non-combat situations as it believes it is not in the national interest for that to get out. But the reverse is true – the ministry should be giving the public accurate information.”

Mukhtarli fears that tighter regulations will leave journalists reliant on whatever the defence ministry and other security service choose to make public.

Azad Isazade, who headed the defence ministry’s press department during the Karabakh war, and is now a defence analyst, believes it is essential for officials to work constructively with journalists and provide them with information.

“Journalist need sources,” he said. “If they don’t have them, it is inevitable that erroneous information will get out.”

For people who live in front-line villages, curbs on journalists visiting them will make it harder for them to get their voices heard.

"We aren’t heard anyway – we don’t get sensible coverage in the media. And now comes this ban,” said Ilgar Mustafayev, a villager from the northwest Qazakh district close to Armenia. “The authorities just want to ensure that our countless problems don’t get out. Frontier and front-line villages aren’t secret installations for journalists to be banned from going there and gathering material unhindered.”

(For a recent report on life in these areas, see Azerbaijani Border Villages Living on the Edge .)

Seymur Kazimov is a freelance journalist in Azerbaijan.

Azerbaijan, Karabakh
Media
Connect with us