Summarily extradited by Turkey, Rauf Mirqadirov faces charges of betraying "state secrets" he could not have known.

Summarily extradited by Turkey, Rauf Mirqadirov faces charges of betraying "state secrets" he could not have known. 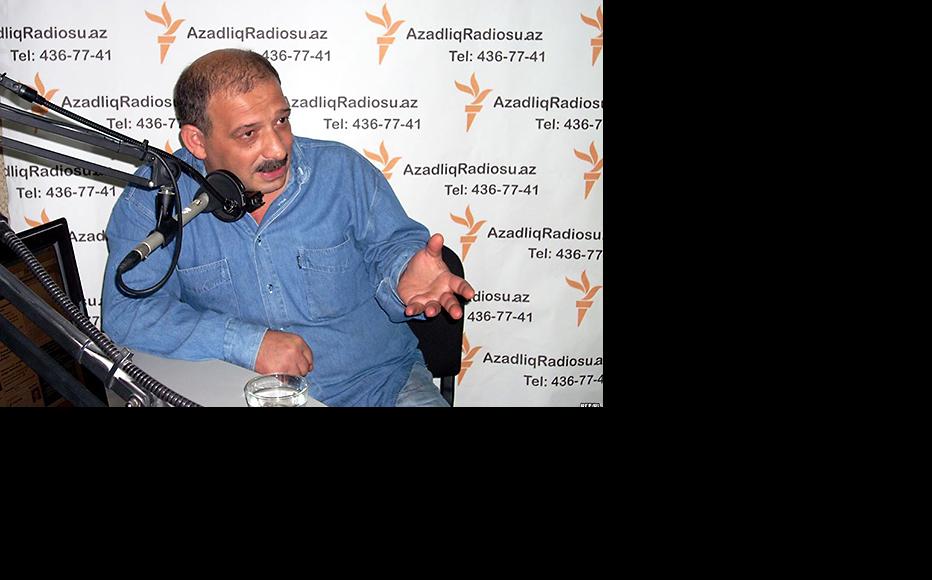 Rauf Mirqadirov. (Photo courtesy of RFE/RL)
The link has been copied

Rauf Mirqadirov, a leading Azerbaijani political columnist, has been deported from Turkey to Baku and charged with spying for Armenia.

Mirqadirov, who writes for the Ayna-Zerkalo newspaper, has lived  in Turkey with his family since 2010.

On April 19, he boarded a bus heading for Georgia, but he was arrested by Turkish police en route and put on a plane to Azerbaijan.

At Baku airport, he was met by agents of the Ministry for National Security – the successor to the Soviet KGB – and placed in custody for three months by court order.

The prosecutor general’s office issued a statement alleging that since 2008, Mirqadirov had been spying for Armenia, with which Azerbaijan has never signed a peace treaty to end the Karabakh war.

“On instructions from the Armenians, he has repeatedly met them in Armenia, Georgia and Turkey and passed them information about the social, political and military situation in the country, as well as state secrets, photographs and diagrams for use in hostile action against Azerbaijan,” a statement from the prosecutor’s office’s said.

In particular, prosecutors say Mirqadirov was in contact with Armenian activist Laura Baghdasaryan, head of the Region Research Centre in Yerevan. They say he passed her secret information liable to harm Azerbaijan’s sovereignty, national security, territorial integrity and defence capacity.

Mirqadirov’s lawyer, Fuad Agayev, met him inside the security ministry’s detention centre on April 21, and told journalists outside that his client considered the charges absurd and was refusing to give testimony to investigators.

Agayev said the prosecution’s citation of Baghdasaryan, whose organisation supports investigative journalism, was proof in itself that the accusations were invented.

They were, he said, probably manufactured on the basis of contact between Azerbaijani and Armenian reporters keen to try to forge mutual understanding and thus ease the path towards a Karabakh peace deal.

“Everyone knows her,” the lawyer said of Baghdasaryan. “Human rights activists and journalists from Georgia, Azerbaijan and Armenia conduct joint projects, assisted by international foundations. Laura Baghdasaryan takes part in these projects. According to the accusation, Rauf passed her information, which is completely absurd.”

Elchin Shikhli, editor-in-chief of Ayna-Zerkalo, said he could not comprehend why his colleague had been arrested.

“There is no other journalist who analyses the situation in Armenia or the Nagorny Karabakh peace talks the way Rauf does,” Shikhli told IWPR. “In each of his articles, he’s given the reasons why the talks haven’t produced results, and every time he has defended Azerbaijan’s position.

As for the espionage claims, Shikhli said, “Only someone who has access to state secrets can betray them. Rauf is not an official, nor is he someone with access to secrets, so this is totally incomprehensible to me.”

The case is already creating an international outcry.

The media rights watchdog Reporters Without Borders (RSF) called for Mirqadirov’s immediate release, and highlighted the role of the Turkish authorities in handing him over.

“By illegally expelling Mirqadirov, the Turkish authorities have rendered themselves complicit in Azerbaijan’s persecution of this journalist,” said Johann Bihr, head of RSF’s Eastern Europe and Central Asia desk. “The grave charges brought against Mirqadirov are totally absurd and fool no one.

“He is just the latest victim of the Azerbaijani government’s campaign to eradicate its media critics. How could this journalist have transmitted state secrets to which he did not have access?”

RSF’s concerns were echoed by leading figures from the Council of Europe, the Committee to Protect Journalists, and the United States Embassy in Baku.

But Ali Huseynov, head of the Azerbaijani parliament’s legal affairs committee, dismissed any suggestions that the government was curbing freedom of expression. He also suggested that “track-two diplomacy” – the informal contacts pursued by NGOs, journalists and others – was now illegal.

“Some lawyers and human rights activists have tried to explain that Rauf Mirqadirov, a man who has been arrested and charged with treason, was engaged in ‘people’s diplomacy’. This is wrong,” he told the official APA news agency. “The public must understand once and for all that in the current military situation, all talks about resolving the Armenia-Azerbaijan Nagorny Karabakh conflict are held exclusively through official channels.”

Lawyer Agayev said his client told him that on April 9, he was called into the Turkish foreign ministry to be told his accreditation to live in the country was being annulled, as was that of his family.

That happened within a few days of Turkish prime minister Recep Tayyip Erdoğan returning from a visit to Baku. According to Agayev, that led Mirqadirov to believe Erdoğan and Azerbaijani president Ilham Aliyev had agreed to swap lists of pet-hate figures living in the other state, and his name was among them.

Mirqadirov is the second Azerbaijani journalist to be deported from Turkey. In February, Ankara threw out Mahir Zeynalov, who wrote for the Today’s Zaman newspaper. They accused him of writing articles critical of Erdoğan and the Turkish government.

Zeynalov was able not to go back to Azerbaijan, and is currently living in another country.

After Mirqadirov was plucked from the bus, his wife Adelya and their younger daughter went on to Georgia, where they still are. Their 12-year-old daughter Suada remains in Ankara.

Adelya Mirqadirova told IWPR she did not know what was going to happen next, but she expressed hope that her husband would soon be released since the charges against him were so clearly invented.