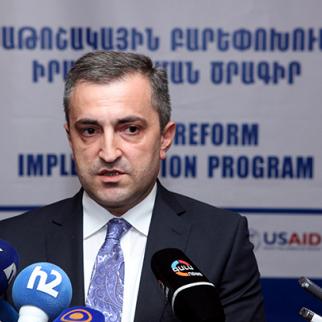 Protests against a pension reform under which new contributions are being deducted from people’s salaries have spread across Armenia.

The law came into force at the beginning of the year, but employees first saw their take-home pay reduced in February.

The new system imposes compulsory pension contributions which are calculated at five per cent of monthly earnings under 500,000 drams (1,200 US dollars) and ten per cent of wages exceeding that amount. The government currently contributes 25,000 drams a month to everyone’s state pension, but this is a fixed amount rather than a percentage and its value is likely to be whittled away by inflation.

The rules only apply to people born from 1974 onwards, and the young professionals most affected feel they are being unfairly targeted.

The protest movement began in the IT industry, where many are well-paid enough to be hit by the higher contributions rate. Companies in this sector generally abide by the law and do not pay cash in hand, or under-report their wage bills to the authorities..

“This is being called a pension reform, but in fact it’s just a way of diverting money to the Armenian government,” Karen Vardanyan, head of the union of IT companies, told IWPR. “IT specialists began this fight since there is a clear injustice here, as well as flaws in the law. They are very well aware that a large part of the economy operates underground, and that the burden will fall exclusively on those companies that function honestly.”

The protest movement began five months ago with a movement called Dem.am (“I object”), which now has 44,000 members on Facebook. It said parts of the reform bill, particularly the compulsory nature of deductions, were unconstitutional, and the age limit was unjust.

Eighty per cent of Armenia’s 12,000 IT-sector workers have joined in the protest, but it has also spread to other groups including lawyers, economists, healthcare staff and teachers. Artists from the Opera and Ballet Theatre in Yerevan refused to perform, while thousands of workers from the electricity and rail networks, the Yerevan underground railway and the Metsamor nuclear power station took to the streets.

Three Yerevan Metro employees lost their jobs after protesting, while Kamo Hovhannisyan, director of the Opera and Ballet Theatre, resigned.

The demonstrations have spread place outside the capital to towns like Gyumri, Goris, Kapan, Vanadzor and Alaverdi.

Company accountants have little choice but to deduct contributions from staff pay, as the computer system used by the State Revenue Committee does this calculation automatically. Even so, more than 70 companies are refusing to implement the rules by taking money from their employees’ pay-packets.

“They’ve started taking money from our pay, without even asking us. We’re against this,” he told IWPR. “Is someone else really going to worry about us more than we worry about ourselves? Who can take money out of my pocket without asking me?”

Gevorg Gyorgisyan, a computer programmer who was one of the first to raise concerns about the reform, told IWPR he was heartened by the way the protests had spread.

“Many people who a few months ago were just sitting at home and complaining have now taken to the streets to protest, and they have realised that it’s up to them,” he said.

Armenia’s Constitutional Court has reviewed the legislation and suspended the effect of the section that makes it punishable to flout the rules. On March 28, the court is to consider whether it is legal to make pension contributions compulsory.

“Because we voiced objections and raised legal questions, the Constitutional Court has blocked certain worrying elements of the law from coming into force,” Gyorgisyan said. “However, after the court ruling, they started taking pension contributions from people’s salaries, so now there’s this protest as a response.”

“The obligation stands. The only parts of the law to be suspended concern the payment of fines for not fulfilling the obligation,” he told parliament. “Conscientious workers are already making the compulsory pension contributions, and not waiting to be fined.”

The growing protests prompted the four opposition parties with seats in parliament – Dashnaktsutyun, Prosperous Armenia, Heritage and the Armenian National Congress – to discuss the reform.

Artsvik Minasyan, a member of parliament from Dashnaktsutyun, said the whole country would suffer if the Constitutional Court upheld the law at the March 28 hearing.

“This will lead to an increase in social tensions, and to our skilled workers emigrating. More aggressive crowds will take to the streets, and Armenia’s stability will be under threat,” he told IWPR.

Speaking at a televised event on February 15, President Serzh Sargsyan acknowledged that the changes were unpopular but insisted that they would improve people’s lives in the long run. He also made it clear that the revenue would go on current spending rather than being saved for the pensioners of the future.

“We are presenting people with a temporary inconvenience and asking them to economise by five percent, but they will they then get this five per cent back in magnified form later on,” he said. “We need this money to make our economy grow, and we can use the fruits of this growth to fund pension increases. We know that 80 per cent of the population is dissatisfied, but we wouldn’t spend this vast amount of money on nothing.”

That did not pacify the protesters, however, who said they would continue fighting the law whatever the Constitutional Court decided.

“Of course the protests won’t calm down, since people are opposed to this law,” computer programmer Tigran Martirosyan told IWPR. “We must continue the battle to get the law scrapped, since it is not just illegal, but also anti-social and anti-economic,

Lilit Arakelyan is a reporter for Araratnews.am in Armenia.