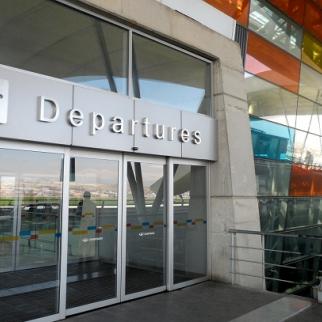 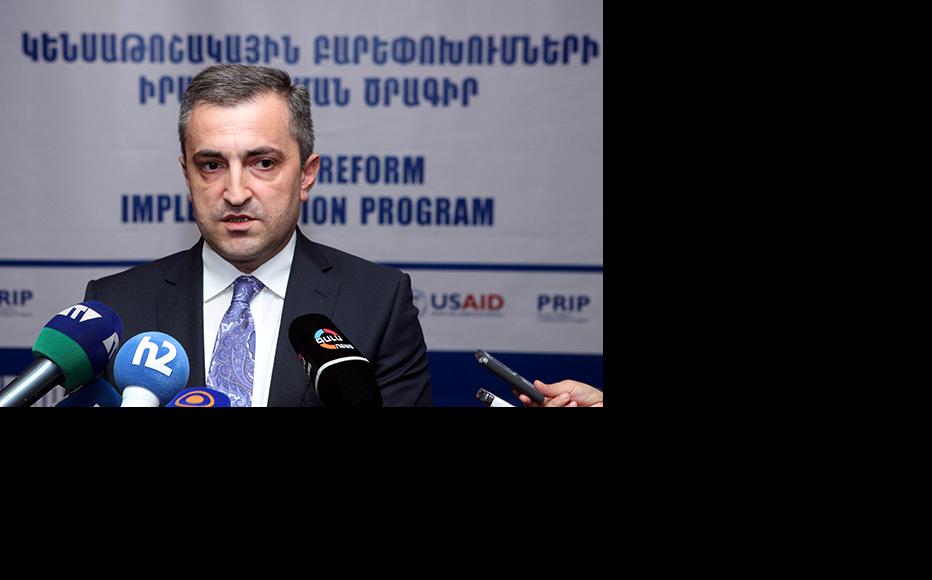 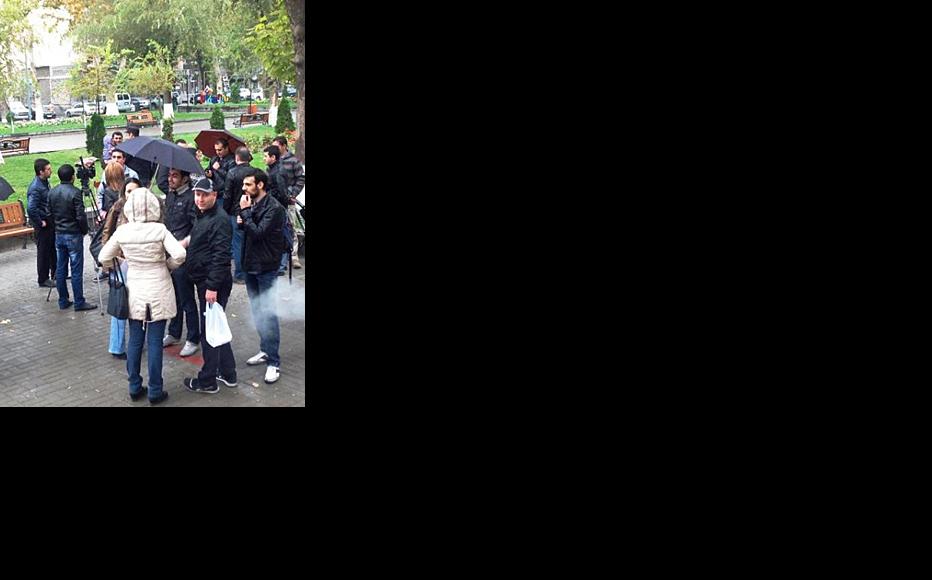 A protest about the pension reform held in Yerevan on November 9. (Photo: 168 Hours) 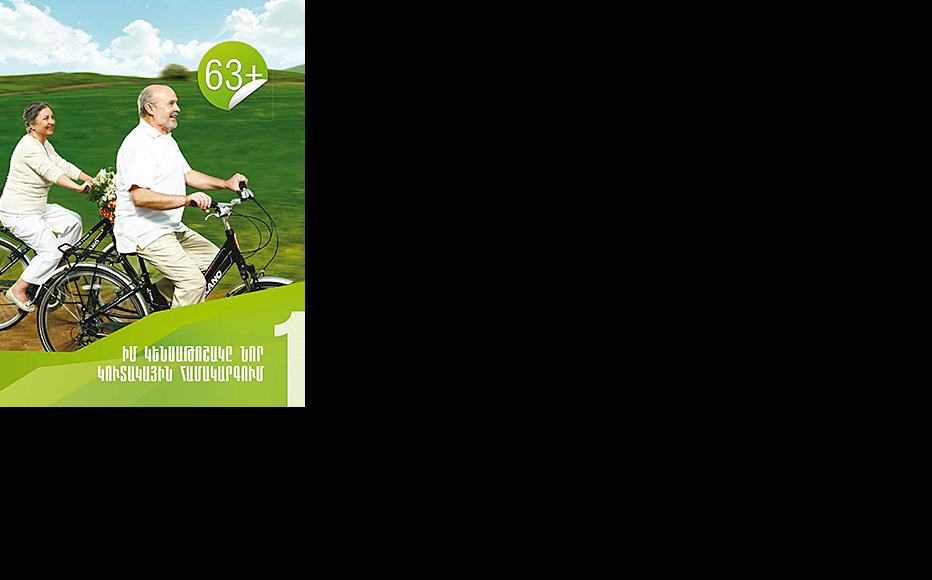 One of the leaflets explaining the proposed pension scheme.
The link has been copied

The authorities in Armenia are facing mounting demands to shelve a pension reform bill that critics say will place an unfair burden on young wage-earners already struggling to make ends meet.

Letters to parliamentarians complaining about the proposed changes have forced an emergency debate in the National Assembly on November 15. The 44 legislators from the opposition Dashnaktsutyun, Heritage, Armenian National Congress and Prosperous Armenia parties who called for the debate will table a motion to delay the measures for one years.

The same day, young professionals will hold a demonstration outside parliament to press their point.

On November 14, Prime Minister Tigran Sargsyan insisted that the pension system would definitely be introduced on January 1. Pointing out that ten years of work had gone into the reform, he called for outreach work to be done to explain the news system to the public and how it would affect them.

The protest movement began among the 10,000 employees of Armenia’s IT industry, most of them young people on at least 500,000 drams (1,250 US dollars) a month – a good wage in this country. Most companies in this sector operate transparently; in other words they do not pay their staff in cash or under-report wage payments to the fiscal authorities..

The pension bill would introduce a system of compulsory pension contributions, calculated at five per cent of monthly earnings under 500,000 drams, or ten per cent of wages exceeding that amount.

However, the compulsory scheme would only apply to people born after 1974, and the under-40s affected feel they are being unfairly targeted.

“These extra pension payments will be added to the 26 per cent [income] tax take, and the total amount will come to 33 or 34 per cent, which we’ll have to pay out of our own salaries,” Artur Baghdasaryan, an engineer with the Synopsys company told IWPR.

The government currently contributes 25,000 drams a month to everyone’s state pension, but since this is a fixed amount rather than a percentage, its value is likely to be whittled away by inflation as both wages and compulsory contributions rise.

Young wage-earners involved in the campaign say they are already hard-pressed by other commitments.

“The problem is that people in this age-group, on whose shoulders the compulsory pension system will rest, have already taken on a whole series of other credit obligations,” said Marine Tandilyan, an accountant at Synopsys. “I myself am already paying a third of my salary to the banks, and I support two children and my parents.”

As well as a delay to the reform measure, campaigners are calling for the new system to be voluntary rather than compulsory for most. If it is to be introduced, it should be mandatory only for new earners now reaching the age of 18, and it should take 2.5 rather than five or ten per cent of monthly salary.

Vardan Aramyan, deputy head of Presidential Serzh Sargsyan’s administration, has ruled out a lower level of contributions, as this would render the new system worthless.

“People need to build up savings in such a way that there’s a significant pot of money,” he told IWPR. “If someone is used to high earnings and there’s a big discrepancy between their pay and their pension, there will be an uprising. Employees are saving this money so that they can use it later. They will get more later than they are now putting in now.”

The head of the pension reform programme, Artak Ghazaryan, said a compulsory system was unavoidable, because Armenia had an aging population that was going to need financial support. He expressed confidence that people would get used to the system over time.

“The new pension system will have a significant impact on the investment climate in Armenia. Compulsory pension contributions will secure economic growth, they will lead to more people saving, and they will reduce the interest rate on loans,” Ghazaryan told IWPR. “A proportion of wages will certainly go towards building up these savings, but this is of course an asset belonging to savers, not part of their tax obligations.”

Another change envisaged by the law is that funds currently held in personal pension plans will pass to the control of the state pension fund. Ghazaryan said the government would provide a “100 per cent guarantee” on all pension savings.

Despite such assurances, future contributors warn that the legislation does not specify whether, or how, money held in the pension fund should be indexed to inflation.

“Our faith and confidence in the government is falling, because it’s taking this money out of our salaries without giving any guarantees whether it will still be money after it’s held for 30 years in Armenian drams,” Isabella Sargsyan, head of the Youth for Democracy group, told IWPR. “This additional burden carries no guarantees. It’s simply going to lead to the emigration of young professionals and the growth of the shadow economy, and it will become yet another cause for anger.”

One risk is that Armenia’s best and brightest vote with their feet, joining the exodus of workers heading for Russia and other employment markets. The state migration agency has calculated that 180,000 people emigrated permanently in the five years to the end of 2012 –a significant number for a country with under three million inhabitants.

Levon Harutiunyan, manager of the Mentor Graphics company, might be among them. He told IWPR, “If the law comes into force on January 1, then I will leave the country myself and even apply for a [US] Green Card.”

Lilit Arakelyan is a correspondent for www.medialab.am in Armenia.