Officials downplay local concerns that Taleban are growing in strength and may retake crucial area of Helmand.

Officials downplay local concerns that Taleban are growing in strength and may retake crucial area of Helmand. 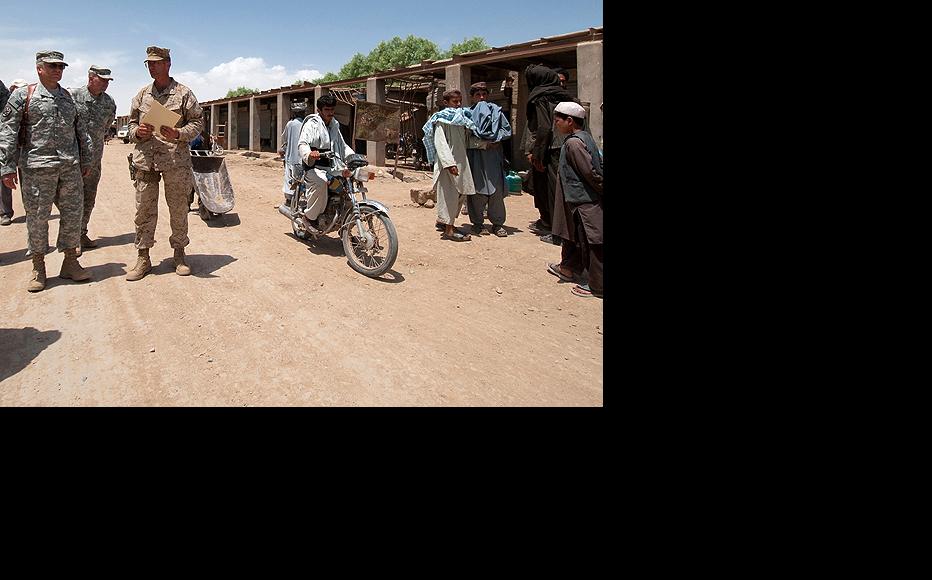 Residents of Marja, the focus of a major operation by NATO-led coalition forces earlier this year to rid the Helmand district of Taleban forces, have spoken of growing insecurity and fear the insurgents could re-establish themselves there.

Some 15,000 foreign and Afghan forces took part in Operation Moshtarak in January, battling 2,000 Taleban fighters for control of the area, a major drug production hub in Helmand.

Though sporadic clashes with Taleban fighters continue, international troops say that Marja is now stable and point to significant improvements in the local economy and development.

But locals IWPR spoke to say they feel too frightened to go to work and are concerned that reconstruction projects are failing.

Mir Wali, a shopkeeper in the Loya Chareh bazaar, complained that he had never seen Marja so insecure and that he believed the Taleban will take over the area if things don’t improve.

“I saw with my own eyes sometime back that the Taleban attacked the governor and Americans on this intersection,” he said, referring to a triple suicide bombing in the centre of Marja last month which targeted a visit by Richard Holbrooke, the special United States envoy for Afghanistan and Pakistan.

Insurgents also shot at his flight as it prepared to land, although they failed to injure his party which included Helmand governor Gulab Mangal, US ambassador Karl Eikenberry and General Stanley McChrystal, then commander of US forces and the International Security Assistance Force, ISAF.

Other businessmen say they are too frightened to open their shops.

“I have not gone to my shop for ten days,” said shopkeeper Haji Abdul Samad. “There, bullets drop like rain from the sky. The cattle and sheep die like flies. I swear there is no humanitarianism or humanity.”

Gul Ahmad, another Loya Chareh shopkeeper, said that he had kept his premises shut for a long time due to Taleban threats.

“The Taleban number has increased and they have worsened the conditions for the people,” he said. “They warn us to shut the shops. They are very cruel, and if I do not shut the shop, they will beat me to death.”

However, a US army spokesman said that the vast majority of the shops in the town of Marja were now open and functioning normally, a sign of what he described as improved security.

“Two weeks after we initially entered Marja, there were few, if any, shops open in the bazaars,” he said, adding that now more than 600 active traders in the various markets around the town, accounting for over 80 per cent of all businesses in the bazaars.

“The bazaars normally see several hundred locals shopping there daily, showing significant trust in the security situation within the bazaars,” he continued.

While there were still clashes with insurgents in Marja, he continued, these were “not to the point where it [will] fall to the Taleban or that locals fear opening their shops - as seen in the numerous shops open daily”.

The US army spokesman also emphasised that coalition forces had numerous projects underway within Marja, including the construction of schools and roads.

But locals insist that development efforts have slowed down and Taleban attacks have deterred people from taking part in reconstruction projects.

Marja resident Asadullah said he had been employed in a Cash for Work project but abandoned it due to the threat of violence.

“I worked in a project for one month,” he said. “We were cleaning the streams and drains and they paid 250 afghanis (5 US dollars) per day, but the number of Taleban fighters increased so much that every day they were conducting attacks. The attacks increased and I left the work.

“There are Taleban on every road and intersection, but few of them carry guns. Some are monitoring the situation, collecting intelligence and information about the movement of the American patrols. And some armed Taleban stay at home and prepare for attacks.”

An employee of the development organisation the International Relief and Development, IRD, said that he had been working on the distribution of water pumps to 300 farmers in Marja district for the last two months.

Declining to give his name, he said that it was proving difficult to give the equipment out. “The people are afraid,” he said. “The Taleban burn the water pumps and if they find them, they kill the farmers.”

IRD spokeswoman Melissa Price said that irrigation pump distribution in the district, which began in May, had been “impeded by a persistent intimidation campaign from the Taleban and concerns from the district government that the distribution would not be adequately monitored due to security conditions”.

However, she added, the project had stepped up its efforts in July, and pumps would be now be distributed from three separate locations in the district “in an effort to alleviate farmers’ security concerns during travel and pump transportation”.

Helmand officials also accept that there are problems, but add that the situation is not as grave as some Marja residents say.

“No doubt there are problems in Marja, we face Taleban attacks, but people support us and there are improvements in Marja,” district chief Mohammad Zaher told IWPR in a telephone interview. “The situation is not so bad. [The negativity] is propaganda.”

Dawood Ahmadi, spokesman for Governor Mangal, said that the problems in Marja were evident elsewhere in the region as the Taleban’s Quetta Shura, its Pakistan-based leadership council, had decided to focus its efforts on increasing insecurity in the whole of Helmand.

“This is not only the problem of Marja,” he said, but insisted that “soon everything will come under control”.

After returning from a ten-day visit to Marja where he consulted with local elders, Helmand deputy governor Sattar Marzakwal said he had decided to create a special police unit to combat Taleban intimidation of locals.

“The rapid response battalion consists of 200 national army, national police and American army officers,” he said. “They will get to any location in a few minutes if people inform them of the presence of insurgents.”

But Mohamad Aqa Takra, a former officer in the communist regime and now a military specialist, said this initiative would not bring security to Marja.

“If the Quetta Shura puts its main focus on Helmand, as officials claim, the Marja district cannot be secured by 200 or 300 men - even 10,000 American and Afghan soldiers couldn’t do it,” he said.

Jabir, a police officer in Marja, said that the district was extremely insecure, and feared the Taleban could soon be back in charge unless something was done.

“Everything has changed here,” he said. “We are afraid of every farmer, and think that there might be a Taleban fighter behind every stone and every tree.”

He said that the only way that Afghan police can patrol is with American soldiers. “The Taleban are very audacious and brave,” he continued. “They have very new machineguns and everyday they conduct more than ten attacks on us in Marja. It is completely horrifying.”

The Taleban claim that their success is due to the help and cooperation of local people.

Taleban spokesman, Qari Usuf Ahmadi, said the insurgents are very powerful in Marja and will never concede defeat to the US and Afghan forces.

“People help us, they give us food and support us and that is why our operations go so well,” he said.

But Marja district chief Zaher maintained that the area would never come under Taleban control again.

“It is impossible to lose Marja,” he added. “Marja will never fall.”