Experts call for more funding and systemic reforms for schooling. By Yevgenia Kim in Bishkek

Experts call for more funding and systemic reforms for schooling. By Yevgenia Kim in Bishkek 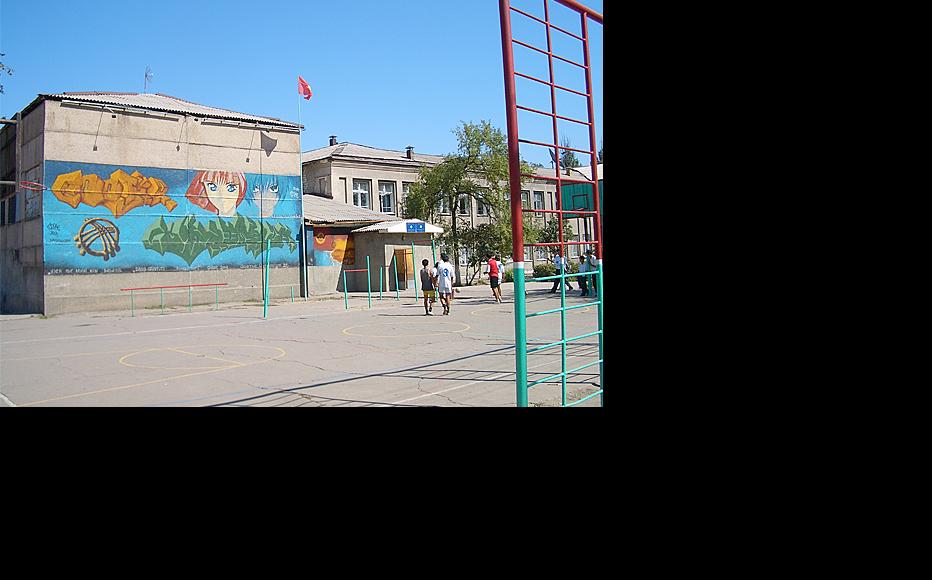 A school near the East bus station in Bishkek. Photo by Vladimir Menkov.
The link has been copied

Tens of thousands of children in Kyrgyzstan do not go to school, even though state education is universal, free and mandatory. Experts say there are not enough school places to go round and parents often cannot afford the informal fees imposed on them. More money needs to be spent to ensure every child can attend, they say.

In March, shortly before Kyrgyzstan was plunged into turmoil by mass protests which led to the installation of a new interim government, parliament conducted hearings on the school system which concluded that education must remain free and accessible to all, despite the levies that have quietly become standard practice over the last two decades.

The hearing looked at the findings of a parliamentary commission which had spent six months looking at the extent to which legislation on mandatory school access and other child rights issues was actually being observed, based on a sample of 31 schools around the country. The debate was also informed by a cycle of debates which IWPR held on access to education around the country.

Guljamal Sultanalieva, who heads the commission, told IWPR that the creeping commercialisation of state education had marginalised many low-income families who could not afford the extra costs. She said parliament fully intended to restore children’s constitutional right to a free education.

A survey conducted by the El Pikir polling organisation with funding from the United Nations children’s agency UNICEF showed that more than 40,000 children – around four per cent of the school-age population – were not in school regularly or at all last year. Some non-government groups believe the real figure is three times that number, meaning that some 14 per cent of children are missing out on an education.

The Institute for Strategic Analysis and Assessment, meanwhile, conducted a study of child poverty and inequality which concluded that only 11 per cent of pre-school-age children were able to attend state-sector kindergartens, which again are supposed to be universally available.

EXCLUSION BY RESIDENCE, ABILITY TO PAY

The group least likely to attend school encompasses the children of what are called “internal migrants” – people who move from the countryside to find work in the towns.

These migrants often live in self-built homes in settlements that have sprung up on the fringes of urban centres, notably around the capital Bishkek. Without official recognition, they live in poor conditions and are denied access to public utilities and services.

Because they are officially registered as residents of their home town or village, their children cannot automatically transfer to a local school. Possession of a residence permit is not supposed to be an obstacle to school enrolment, but it is nevertheless often demanded by school managers, who turn away children whose parents do not have the required document.

A further hurdle facing these children is the widespread practice of testing children prior to enrolment. They are often behind with their education as they come from rural areas where standards are lower.

Last August, the education minister issued orders banning the use of tests in the interests of equality. But according to Rabi Chekieva, headmistress of a school in Issyk-Ata district in the northern Chuy region, “Many school heads haven’t even heard of this order. And of course they haven’t been acting on it.”

Migrant’s children often spend their time working to help support their families, although child labour is formally prohibited in Kyrgyzstan. They account for eight out of ten children who work.

More generally, Kyrgyzstan faces a shortage of school places. The education ministry says Bishkek’s schools are so swamped with pupils that some run three separate shifts in the course of a day. Ministry officials say the capital needs 20 more schools than it has, and the situation is much worse elsewhere in the country.

Yet this alone does not account for the large numbers of children not attending school. The financial costs of sending a child to school are also a major factor.

The Kyrgyz constitution stipulates that primary and secondary education are provided free of charge in the state sector. Schools have been allowed to ask for some payments since the early Nineties, but this is supposed to be for optional extras like extra-curricular tuition.

However, a system of informal fees and levies is applied on a much wider scale for the basic education that is supposed to be free. School heads argue this is necessary because government funding is so inadequate. It makes going to school an expensive business for families at the lower end of the income scale.

First, there are the enrolment fees which, according to the Child Rights Defenders’ League can be as low as 200 sums or as high as 20,000 soms, about 450 US dollars for the most prestigious state schools.

In Bishkek, demand for places at elite schools means they can pick and choose, so low-income groups like the migrants do not stand a chance of getting their children.

According to Nazgul Turdubekova, head of the Child Rights Defenders’ League, the prestige tag attached to some schools does not always mean they are better; it can just be a way of hiking up their fees.

Once their child has got into a school, parent have to fork out a monthly fee which again can range from a couple of dollars to 600, according to information gathered by parliament’s special commission on education. These are extraordinarily high in a country where the average wage last year was 135 dollars nationally, and around 200 in the capital where living costs are higher.

“I have to do two jobs to pay for schooling,” said a woman in Bishkek with a daughter at school. “Nearly a third of my wages goes on it.”

Notionally, these fees are voluntary contributions to pay for equipment and maintenance that that the state is not providing. To make the scheme legal, schools set up special “charity” funds to collect contributions. But in practice, a good deal of pressure is applied to ensure parents pay up – including humiliating the child in class, and even excluding him or her on occasion.

One mother whose daughter attends a “gymnasium” school offering a higher-than-average standard of education said, “I was given the hint that if we couldn’t pay monthly fees it would be better to transfer our child to another school. They won’t come out and say it, but if they want to expel her, they’ll find a reason.”

Like many other parents, this mother does not want to get into a battle with the school, so she has not reported her case to the school inspection authorities.

The Child Rights Defenders’ League says teachers commonly subject children whose parents are behind on payment to a barrage of criticism, insults and humiliation in the classroom.

Education experts say the lack of clear boundaries between mandatory payments and voluntary contributions amounts to something like extortion; nor is there much transparency in the way the money is spent.

“The levies demanded by school managers are excessive,” said Turdubekova. “Very large sums of money are coming in from the parents, and the expenditure is effectively unsupervised.”

At the same time, there is a general recognition that education is badly underfunded.

Kalicha Umuralieva, who works as a consultant to the Our Rights group, says that “the school director has today become a businessperson. Aside from developing the curriculum, they are forced to take care of the finances and make sure the pipes don’t leak. Under these circumstances, the never-ending flood of financial and economic problems eats up the bulk of secondary school heads’ time.”

Teachers are perennially in short supply given that they can expect to make just 45 dollars a month, according to education ministry data.

“We have a great many pensioners working for us, because younger teachers don’t want to work in the schools for such a pittance,” said Ludmila Bayborodina, head of a gymnasium school in Bishkek. “Teachers are people too, and they have children they need to feed. So we take money from the parents’ fees to pay our teachers extra.”

The Kyrgyz government has introduced several schemes to pay incentives to teachers, including newly-qualified ones, and the education ministry says that as a result, 600 staff members have been recruited for schools outside the capital over the last four years.

Umaralieva, however, says such schemes will not resolve the problem, since the additional payments amount to very little once inflation is taken into account.

To counter the use of fees, a number of child rights groups have launched a project to introduce advisory boards consisting of parents, teachers, education officials and rights activists, which will monitor the way school budgets are being managed. A number of boards are already operating as part of a pilot scheme, and the plan is to institutionalise the system through an act of parliament later this year.

Commission head Sultanalieva argues that “our laws are good, correct ones, but they aren’t being obeyed. We need to follow how they are being regulated and implemented so that they satisfy both sides – parents and teachers.

One of the first legislative changes the commission is proposing is to sort out the “voluntary” funds which schools have set up. As Deputy Prime Minister Tajikan Kalimbetova pointed out during last month’s parliamentary hearing, these are currently outside the government’s control – even though they potentially encroach on the constitutional right of access to education – because the state audit office can only look at the way government allocations to schools are managed.

Turdubekova says it is encouraging that the education ministry is prepared to engage with non-government groups.

However, the parliamentary hearing failed to arrive at a consensus among the various actors – government, school managers and NGOs – on what exactly needs to be done.

Speaking during the hearing, education minister Abdylda Musaev said that while there were isolated cases of children being denied schooling, it would be wrong to generalise. While there was certainly a need to look at what internal rules schools had in place and amend them where necessary to avoid violations, he said, “placing a total ban on commercial educational services, as is being proposed here, could put an end to the education system”.

Educationalists warn that not doing anything is no longer an option, as the future of Kyrgyzstan will be at stake if it fails the current generation of schoolchildren.

“The state is digging itself into a hole,” said Umaralieva. “The work will be done by unqualified specialists, while those with good qualifications will emigrate, since they won’t be able to feed themselves.”

Yevgenia Kim is an IWPR-trained journalist in Bishkek.

This article was produced under IWPR’s Building Central Asian Human Rights Protection & Education Through the Media programme, funded by the European Commission.

The contents of this article are the sole responsibility of IWPR and can in no way be taken to reflect the views of the European Union.