Unlike in other Central Asia republics, multiple factions rather than one strong state are undermining media freedom, say journalists.

Unlike in other Central Asia republics, multiple factions rather than one strong state are undermining media freedom, say journalists. 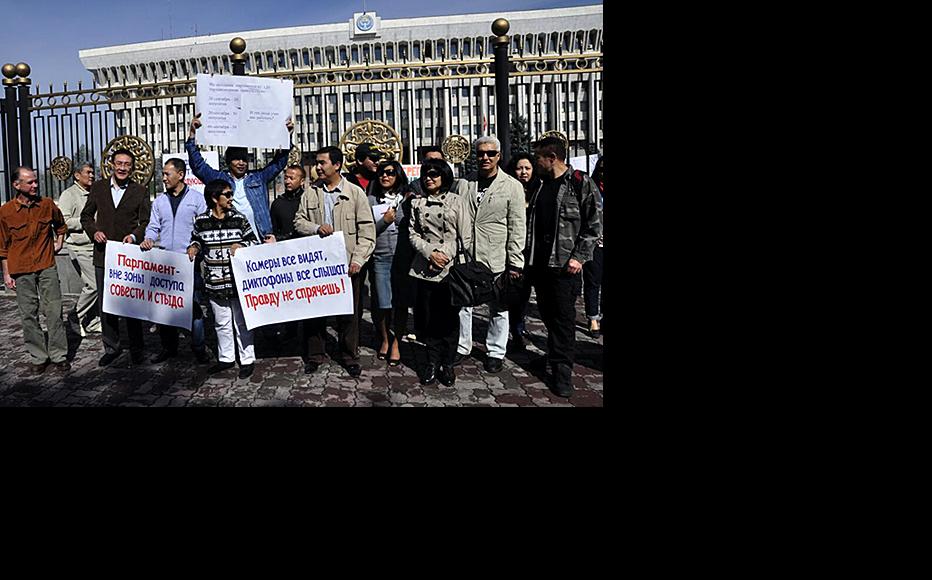 “Freedom of speech is not the property of parliament,” Igor Shestakov said, standing with 50 or so fellow-journalists in front of Kyrgyzstan’s legislature.

Shestakov, editor of the news website Region.kg, was taking part in an October 1 demonstration against politicians whom journalists accuse of trying to censor their work and prevent them doing their jobs.

Kyrgyzstan does not have the heavy state censorship that is a feature of authoritarian Central Asian states like Uzbekistan and Turkmenistan. But Shestakov believes his country should be measuring itself by international, not regional standards.

“The public needs to shake off its euphoric belief that this is the most democratic [Central Asian] regime for the media to operate in,” he added.

The protest in the capital Bishkek was small-scale, bringing together around 50 journalists and media rights groups. But according to one participant, Konstantin Konkin, who reports for Stan TV, numbers were not the point.

“It wouldn’t have mattered if just if ten people had turned up, as long as they were united by a common goal,” he said. “I’d like to believe that now the authorities have seen it’s one for all and all for one with us journalists, they’ll calm down and give media people a chance to do their jobs.”

A petition which protesters addressed to Kyrgyzstan’s president, prime minister, and the speaker of the parliament said that while things were certainly better than in neighbouring states, journalists were under increasing pressure.

The statement described a worrying tendency for some members of parliament to try to silence the media, plus the failure of law enforcement to act when journalists were attacked or threatened.

“I am concerned about cases that are coming one after another where media professionals are put under pressure by the authorities. I don’t think we can remain silent any longer,” Konkin said. “Otherwise, it’s journalists from NTS [private TV station] today, tomorrow it might be reporters from another channel, and the day after tomorrow it could happen to us all.”

The journalists were moved to take action when parliamentarians from the Ata Meken party – part of the ruling coalition – objected to NTS television reporters attending a committee session on September 27. The committee was looking at a highly sensitive matter – allegations that some serving members of parliament had encouraged looting during popular unrest in the capital Bishkek in April 2010.

The parliamentary inquiry was launched after NTS broadcast an interview with a man now in custody who is facing charges of taking part in the looting. He alleged that Ata Meken members were on the ground, directing groups of young men as they set out on a looting spree.

Speaking on October 2, Ata Meken leader Omurbek Tekebaev denied that forcing the NTS team to leave the committee meeting represented a violation of media freedom. He turned on NTS itself, accusing it of producing one-sided report as a political weapon against his party.

In a speech in parliament a few days earlier, he had alleged links between the NTS company and Omurbek Babanov, who was ousted as prime minister when Ata Meken and the Ar Namys party walked out of the governing coalition. (See Kyrgyz Elite Ousts Over-Independent Premier.)

Even if the NTS affair has a political component to it, journalists say it is just the latest in a long list of similar incidents. Ulugbek Babakulov, editor-in-chief of the MK-Azia newspaper and one of the protest organisers, said the problems facing the media went far beyond this one TV station.

Radical constitutional changes approved in 2010 gave Kyrgyzstan a strong multi-party parliamentary system instead of the old top-down presidential hierarchy. What that means is that instead of one central authority pressing down on media freedom, there are now multiple political factions trying to do the same thing, each of them representing a different elite interest group.

“It’s clear that over the last year, parliament has become the main source of censorship and pressure on the media,” Shestakov said, summarising the situation as “political parties trying to control the media”.

He gave a list of recent examples, starting in autumn 2011 when Channel 5 journalists had their parliamentary accreditation revoked after a TV programme alleging that the then speaker had misused public funds. He was eventually forced to resign after the matter refused to go away. In February this year, parliamentarians pushed for the popular news site Ferghana.ru to be blocked. The following month, elected member Irina Karamushkina sued 24.kg news agency journalist Makhinur Niazova over a news report about her.

Nor is it just domestic media that politicians take against. Shestakov pointed to the ban on local rebroadcasts of foreign stations enforced during the 2011 parliamentary election. This, he said, was directed at Russian media which had broadcast an unflattering report about Tekebaev.

While not a concerted action by the state, such moves tend to undermine the media’s ability to probe and uncover matters of public interest.

“Members of parliament should do what they’re supposed to do and not interfere in the work of others. Their job is to make laws, not to exploit their positions for their own benefit,” Konkin said.

Shestakov added, “These days, the public trusts journalists more than it does politicians – a reality that certain members of the parliamentary factions don’t appear to have grasped.”

Babakulov noted that the demonstration outside parliament was the first occasion on which Kyrgyzstan’s journalists had really shown solidarity across the board, rather coming out to protest only when their own colleagues were in trouble.

The past lack of unity stems in part from the fact that commercial media outlets, like any other businesses, are often owned by or linked with the same elite groups that are represented in parliament.

“It used to be that each media outlet stood up for itself only... this time we’re all in it together – Pyramida [TV and radio], NTS, the internet outlets, newspapers and radio,” Babakulov said. “I believe parliamentarians see that journalists are not going to shut up and tolerate the pressure they exert, and that they can show their teeth.”

Babakulov noted the way that social media are increasingly a mobilising tool for defending journalists. When Niazova was sued, a support group was set up on Facebook where journalists publicised her case, as well as posting information on how to get legal advice.

Niazova was among those who attended the October 1 demonstration, and was appreciative of the collective help she had received.

“The support I got from colleagues demonstrated that solidarity among journalists, which many people didn’t believe existed, is not as hopeless as I believed. I think my case has been a turning point,” she said.

Dinara Tokbaeva is a Kyrgyz journalist currently based in London.

[Correction: We wrongly described the allegations subject to a parliamentary investigation. The allegation is that elected politicians encouraged looters during unrest in the capital Bishkek in April 2010, not during the subsequent ethnic violence in southern Kyrgyzstan in June 2010. The above text has been corrected. Apologies for the error.]