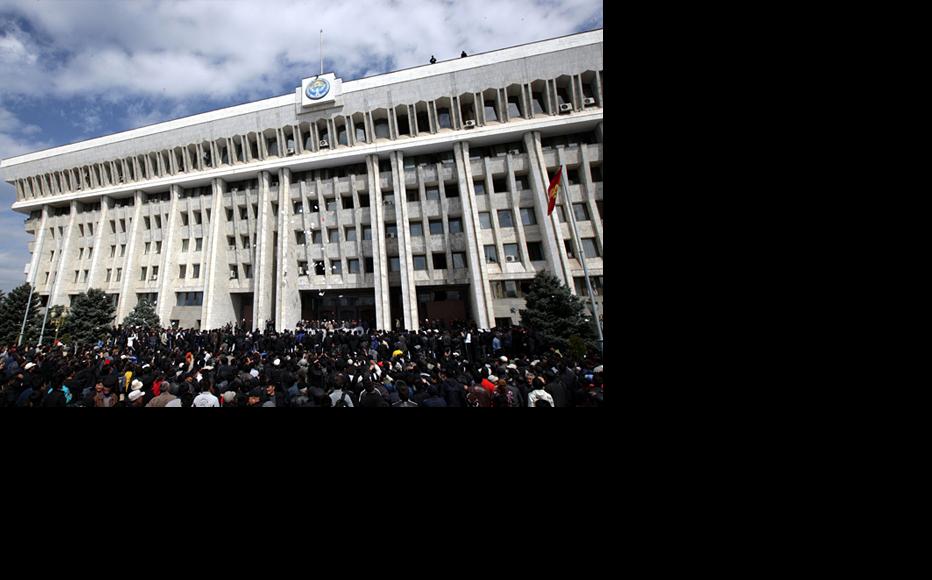 The White House in Bishkek symbolises Kyrgyzstan’s transition from a presidential to a parliamentary system of government. Shown here during disturbances in April, it was the seat of the then president Kurmanbek Bakiev. Now it has been refurbished to house the new parliament. The president is moving to the old parliament building. (Photo: Igor Kovalenko)
The link has been copied

As the final results of the October 10 parliamentary election were announced this week, Kyrgyzstan's president Roza Otunbaeva urged political parties to accelerate coalition talks so that the process of forming a government can get under way.

In a video message posted on her website, Otunbaeva said she hoped that by the end of this week, parties would have named the members who would be taking up seats so that parliament can convene for its first session. Under the proportional representation system used for the ballot, the 120 seats in parliament will be filled from the parties’ lists of candidates.

The president said she planned to meet party leaders to discuss the progress they had made on building coalitions, and would select one bloc to form a government on November 8.

As none of the five parties that won seats secured an absolute majority, it falls to the president to award one bloc the right to choose a prime minister and thus a cabinet.

The announcement of final results came on November 1; it was delayed because electoral officials had to deal with allegations of voting irregularities, even though the vote has been seen as Central Asia’s most democratic election to date. The Butun Kyrgyzstan party, which failed to pass the threshold needed to win seats, has staged countrywide demonstrations to demand a recount.

The final results are unchanged from the preliminary calculations made straight after the election, and leave Ata-Jurt with 28 seats, the Social Democratic Party 26, Ar-Namys 25, Respublika 23, and Ata Meken 18.

The numbers mean that at least two, possibly three need to form a coalition to secure the 60-plus majority that would make them the inevitable choice for Otunbaeva. But more than three weeks after they began talking to one another, no coalition has emerged.

The most likely combinations would involve either Ata-Jurt or the Social Democrats, each in combination with one or two others.

Ata-Jurt is a relatively new party, describing its members as “national patriots” and reflecting opposition to the interim government that replaced former president Kurmanbek Bakiev, ousted in a popular uprising in April.

By contrast, many leading Social Democrats were closely involved in the post-Bakiev administration.

The three parties have 67 seats between them.

Respublika is a new party and in some respects the wild card in this election. Analysts have previously suggested it could strike a deal with Ata-Jurt. But as Moldaliev pointed out, Social Democratic and Respublika leaders have recently been talking publicly about teaming up.

Ata-Meken, another party involved in the interim administration, is a natural choice of partner for the Social Democrats.

But speaking to RFE/RL radio on November 2, Ata Meken leader Omurbek Tekebaev said his party had not been formally approached.

"We are the smallest party. No one is taking us seriously yet, so no one is holding any official talks with us,” he said.

Independent political analyst Medet Tyulegenov said coalitions could only built by parties that shared broadly similar visions. The Social Democrats and Ata-Meken favour turning Kyrgyzstan into a parliamentary democracy. Both were closely involved in drafting constitutional changes designed to make that happen. The constitution was passed in a national referendum in June. Both Ata-Jurt and Ar Namys have indicated that they preferred the old system based on strong presidential rule.

But as Tyulegenov put it, "Under certain circumstances pragmatism may outweigh such differences."

Around election time, there were many reports in the local media about party leaders going off to Moscow to seek its blessing and support.

However, Andrei Grozin, director of the Central Asian department at the Commonwealth of Independent States Institute in Moscow, downplays concerns that the Kremlin is exerting undue influence on the political scene in Kyrgyzstan.

“What Russia is interested in above all is stability in Kyrgyzstan," Grozin said, adding Russia was providing substantial assistance to Kyrgyzstan, which is desperately short of funds because of political turmoil and general economic crisis.

Grozin noted the remarks made by Russian president Dmitry Medvedev following the June referendum in Kyrgyzstan, in which he suggested that what the country needed was strong centralised rule, not a parliamentary system. But Grozin said that regardless of these comments, “it doesn’t matter to Russia what kind of political system Kyrgyzstan has".

Whichever political grouping is in charge of the Kyrgyz government, he said, it is going to have to seek financial assistance and political support from Kazakstan.

“In Kyrgyzstan, politicians are mainly oriented towards the voters and only to a lesser extent towards external players,” Kuzmin said.

This article was produced jointly under two IWPR projects: Building Central Asian Human Rights Protection & Education Through the Media, funded by the European Commission; and the Human Rights Reporting, Confidence Building and Conflict Information Programme, funded by the Foreign Ministry of Norway.
The contents of this article are the sole responsibility of IWPR and can in no way be taken to reflect the views of either the European Union or the Foreign Ministry of Norway.