Too few officers have undergone vetting, and not many people are brave enough to come forward with information on abuses.

Too few officers have undergone vetting, and not many people are brave enough to come forward with information on abuses. 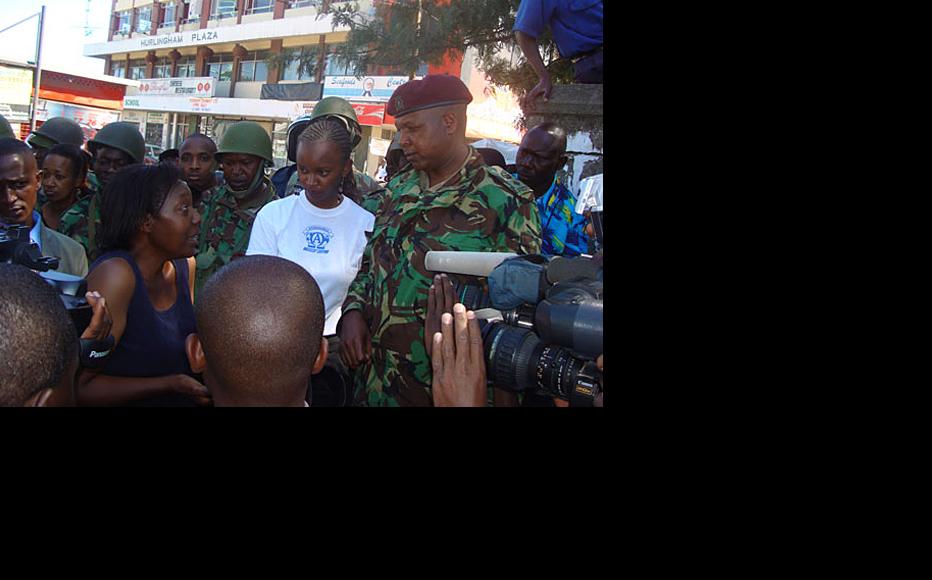 The vetting of Kenya's 78,000 police officers has fallen badly behind schedule. (Photo: Daudi Were/Flickr)
The link has been copied

Human rights groups and security experts in Kenya say a vetting process that is key to reforming the police force has barely got off the ground, and needs urgent action to make it both credible and effective.

They are concerned that repeated delays, lack of transparency and failure to engage the public have badly undermined a programme designed to check the professional background of every police officer in Kenya’s 78,000-strong force.

The process is required by the National Police Service Act, which came into force in 2011 as a way of invigorating efforts to reform policing. (See: Will Vetting Clean Up Kenya's Police?)

Vetting by the National Police Service Commission (NPSC) began in November last year, but it has fallen badly behind schedule and is unlikely to be completed by the target deadline of August 2015.

In almost a year, only about 200 officers have been checked.

“By now, they ought to have finished vetting all senior police officers, from the rank of superintendent and senior superintendent moving upwards,” Ndungu Wainaina, executive director of the International Centre for Policy and Conflict, a Nairobi think tank, told IWPR. “They should [now] be screening middle-level cadre which involves officers commanding police station [OCS], deputy OCS and senior sergeants.”

The commission’s work suffered a major setback in February, when four key members of the vetting team resigned.

A series of terrorist attacks by the Somali Islamist militant group al-Shabab further diverted the attention of the security services. The Nairobi suburb of Eastleigh, as well as parts of Kenya’s coastal and northeastern regions, came under attack, with nearly 100 people losing their lives during June and July.

To make up lost ground, the NPSC subsequently created vetting panels at regional level, with reports on officers then forwarded to Nairobi.

Aside from delays, critics also point to a lack transparency which they say casts doubt on the strategy’s effectiveness. In particular, some question why the vetting panel has failed to hold officers to account in cases where there is clear evidence of human rights violations. So far, fewer than 20 officers have been deemed unfit to serve.

While the overall process is public, security constraints dictate that some sessions in which abuses are discussed are held in private.

Peter Kiama is director of the Independent Medico-Legal Unit, part of a working group of Kenyan organisations that monitor police reform.

“We have not seen any clear case of officers being held accountable for human rights violations, yet organisations and citizens have presented evidence of such incidents,” Kiama said, calling for “a more robust inquiry” into culpability.

“There is no guarantee that the final decision made by the panel is not biased,” he said.

While the vetting process is designed to identify past misconduct, it is also part of a longer-term effort to clean up the police force and instill high standards of ethics and professionalism.

Corruption and human rights violations are still widespread, and critics say the level of progress is not encouraging.

“I have not seen any change in terms of mindset, attitude and practices,” Kiama said. “We have a long way to go.”

One continuing problem is the lack of involvement by the Kenyan public.

“Most people are unaware of how to participate; information on the vetting process is never readily available – even some police officers are not aware of this process,”Kiama said.

In a straw poll carried out by IWPR on the streets of Nairobi, seven out of ten people interviewed were unaware of the vetting exercise, while those who knew about it were unsure how it worked.

“I know the process kicked off late last year and a few officers were dismissed,” Christine, who works for a mobile phone company in the capital, said. “I, however, do not understand whether it is a continuous process or when it comes to an end.”

The NPSC has relied heavily on documentary material, largely relating to financial matters, rather than information from members of the public about officers’ conduct.

James Ndung’u of the Usalama Forum, another member of the police reform monitoring group, believes this has prevented a more thorough examination of individual officers’ records.

“This may see some officers sailing through the vetting even when there are doubts about their integrity,” Ndung’u told IWPR.

The NPSC says it has publicised the vetting process through the media. But its director of communications, Khalid Salim, admits that publicity remains a real challenge, something he blames on inadequate funding.

“We always invite members of the public who launched complaints to attend proceedings,” he told IWPR. “However, we are challenged because the level of awareness seems low.”

Chris Gitari, a human rights lawyer working with the International Centre for Transitional Justice think tank, said the government had grossly underestimated the need for outreach when it set up the NPSC.

Gitari is lobbying for the commission to invite people at county level to submit information about local police officers.

“The important issue is for the commission to engage the public much more rigorously; they should find ways of reaching out to organised groups countrywide and get into a dialogue with these groups,” he said.

Kiama agreed that the NPSC needed to go much further and publicise specific complaints raised by citizens as well as giving public feedback on each officer who is vetted. The commission should also engage with civil society groups to ensure that the public was aware of who was being vetted and how to submit information on them, he added.

However, years of mistrust in the police force mean there is no guarantee people will volunteer information. (See: Tackling Police Corruption in Kenya)

The lack of a witness protection scheme in Kenya means that anyone who provides information implicating a member of the force cannot expect to be safe from retribution. Although victims can report incidents of abuse anonymously, they are often summoned later to provide live testimony to the panel in front of the officer concerned.

“Protection of witnesses is a must, because the lives of witnesses are risked,” Wainaina said. “They have therefore shied away from giving evidence and participating in the exercise altogether. The vetting board is fully aware that protection is mandatory. Experts have explained so many times that without protection, the exercise becomes a sham.”

Nearly a year into its mandate, it remains unclear how far the vetting programme will achieve its goal of rooting out rogue officers.

Some critics fear that public mistrust runs so deep that it will be very hard for the NPSC to engage their interest, even if it makes wholesale changes.

In Wainaina’s view, people “just do not care”.

But others like Kiama are more optimistic. He believes that if the NPSC implements the recommendations made by the police reforms working group, the vetting exercise will still serve its purpose.

“We still have 99 per cent of officers to be vetted. There is still leeway to salvage this,” Kiama said.

Lilian Ochieng is a reporter for ReportingKenya.net and the Daily Nation in Nairobi.

Kenya
Connect with us