Will Vetting Clean Up Kenya's Police?

Will Vetting Clean Up Kenya's Police? 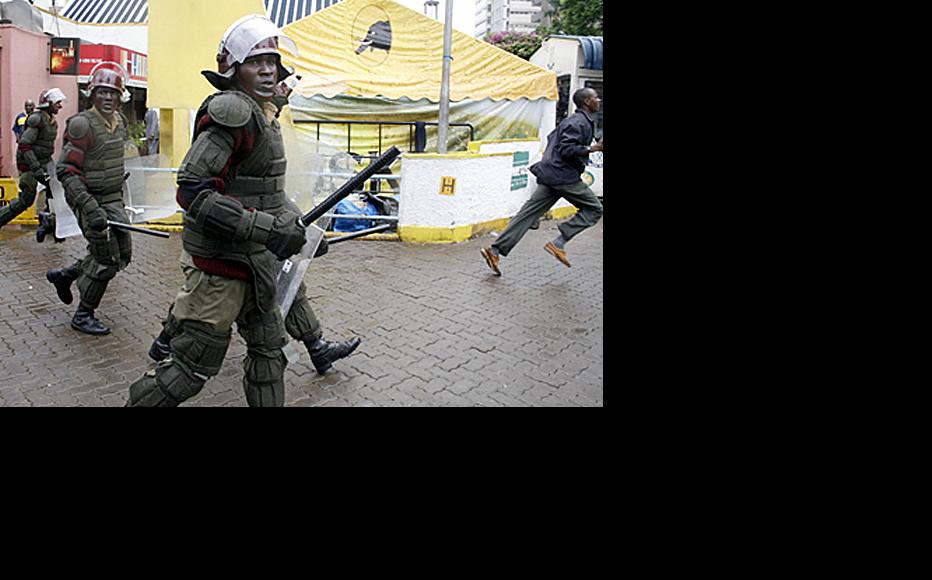 Riot police take action in Nairobi&amp;#039;s central business district. A further 166 police officers will appear before the vetting panel on March 3. (Photo: Demosh/Flickr)
The link has been copied

As Kenya’s police force begins the latest step in a major vetting process as part of a reform of the service, security experts and human rights groups warn that more needs to be done to deal with an institutionalised pattern of abuses.

The exercise began in November and is intended to help reform Kenya’s police service. The aim is to check the professional background of every officer in the 78,000-strong police force through a panel set up by the National Police Service Commission (NPSC).

Members of the public have also been invited to come forward with any complaints or information about individual officers. Those with a history of corruption or human rights violations face losing their jobs.

So far, the vetting exercise has led to three senior deputy commissioners being dismissed, including one who was found to have drawn an entire year’s salary without coming to work. All three are challenging their dismissal in court.

The process is part of Kenya’s National Police Service Act which came into force in 2011 and is expected to take up to 18 months. Another 166 officers will appear before the panel on March 3, in a screening delayed from February 14 due to the failure of the finance ministry to release the necessary funds.

On February 27, four members of the team conducting the vetting process resigned. They have been replaced, and the process will go ahead as scheduled.
In a worldwide survey published by Transparency International last year, Kenyans viewed their police force as the country’s most corrupt state institution. (See Tackling Police Corruption in Kenya.)

A 2013 report by the Independent Medico-Legal Unit (IMLU), a Kenyan NGO, pointed to a culture of corruption, brutality and extrajudicial killings. According to police records, the nationwide crime rate has risen seven per cent over the last ten years.

Few would dispute that the force is desperately in need of a radical overhaul.

“Merits-based promotion no longer exists, there is rampant and systemic corruption, [and] there is lack of adherence to codes of conduct,” Tom Kagwe, head of the Independent Police Oversight Authority (IPOA) told IWPR via email. “Indeed, to be a professional in the police force is like proverbially committing suicide, since one cannot challenge a system that is more than one century old, with its own culture, attitude and approaches.”

Despite the background checks, some experts doubt the process will uncover misconduct and abuse on the part of individual officers. Critics say the Kenyan police force has largely failed to investigate acts of misconduct or human rights abuses committed in the line of duty.

Last year, the Kenya National Commission on Human Rights (KNCHR) concluded that police had been responsible for the unlawful deaths of 120 people between the months of May and August. These killings had not been reported to the IPOA, even though police are required to do this by law.

Police abuses often go unreported by members of the public, too. In a separate survey conducted by the KNCHR immediately before vetting began in November 2013, 58 per cent of respondents said they believed that no action would be taken if they reported an officer for misconduct.

The Usalama Forum is part of a group of organisations that make up the Police Reforms Working Group in Kenya.

Eva Kimani, who works for Usalama's community safety project, told IWPR that while some members of the public had given spoken or written evidence during the vetting exercise, they had been “too afraid” to testify publicly in front of the panel.

The result has been that instead of exposing acts of misconduct, investigations have focused on the financial background of individual officers.

The NPSC has looked at ways of encouraging public involvement and has already extended the period during which people can come forward with information during the vetting process from five to 14 days.

But gathering incriminating evidence of human rights abuses has been a difficult task.

“[A financial background check] is more tangible than information that maybe they have received [from the public],” Kimani said, noting that incriminating evidence against an officer was not necessarily enough to prompt dismissal.

“There is no way of proving that [a particular officer] committed an atrocity or crime, so there is no way they can hold them accountable,” Kimani added.

Beyond the vetting process, commentators argue that much more will need to be done if the authorities are to improve the overall standard of policing in Kenya.

Kagwe of the IPOA argued that while the vetting process would help professionalise the service, people “wanted so much more than police being grilled in public and some being fired”.

“Kenyans, from my point of view, wanted police to respect them and [to] stop this constant intimidation, threats and abuses,” Kagwe said. “Kenyan people wanted to see police that care about their feelings, their children, old people and also other vulnerable groups and also to ensure that those that violate these [standards] get punished.”

Abubakar Barusi, from the Centre Against Torture organisation, praised the intentions behind the vetting process but told IWPR that bad practices were so entrenched that extensive retraining would also be needed.

“There should be some mandatory courses that will inculcate the good virtues or ethics in the officers,” Barusi said. “The bad image which the force has acquired can only be done away with if the officers are retrained to apply good ethics in their work.”

Others also warn that the police badly need to rebuild public trust.

Pamelle Kemboi, a member of the community policing team in the town of Njoro in the Rift Valley province, argues that the benefits of the vetting process will be limited because Kenyans have lost confidence in the force.

“Even after the vetting, there will be a need for building bridges of trust between the police and the public,” she said. “Otherwise the vetting alone will not be enough to convince Kenyans that the officers are different from those they knew.”

The NPSC says it is aware of the problem and is planning an education programme to build public awareness of the reforms that have been undertaken.

Others have called for a full evaluation of the vetting exercise and the malpractice it uncovers in order to work out a way forward.

“The information that has come out already shows there are huge problems in the police,” Sarah Mount, who works on the Access to Justice programme at the Commonwealth Human Rights Initiative (CHRI), said. “Some of the reasons why the police act the way they do need to be looked into and addressed.”

Other commentators are not optimistic that this will happen.

Although public spending on the police has increased significantly over the last ten years, Kimani does not believe the government is truly committed to reforms.

The authorities have focused on individual areas, such as buying equipment and improving infrastructure. Soon after President Uhuru Kenyatta took office in April last year, he allotted four billion Kenyan shillings (46 million US dollars) per year for security equipment.

Kimani is concerned that the government has not outlined improvements to overall policing policy or prioritised training and ethics.

According to the Usalama Forum, a four-year modernisation plan launched this year is likely to cost the taxpayer 200 billion shillings (2.3 billion dollars), but only three per cent of the money earmarked for improvements will be used to recruit and train officers.

“The police as a whole have not understood that there is a need for different strategies in terms of delivering security to its citizens,” she said. “Equipment is not the only thing; there is a lot more that needs to be done in terms of community policing and what the police understand that their community needs in terms of safety and security.”

But to do this, there needs to be genuine political will.

“As of now, the government is not very supportive of the reform process,” Kimani said. “The engine to drive it is falling short, in our view. There is a lot of focus on the reform and bits and bobs, but the process is lacking a proper duty-bearer.”