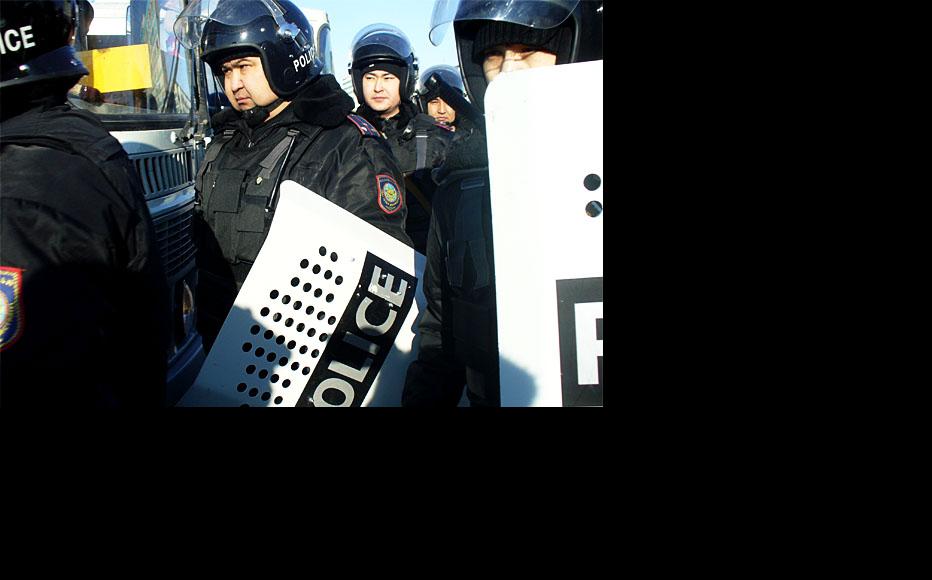 Kazakstan’s government must decide whether brute force is the right way to deal with protests. (Photo courtesy of Respublika news site http://www.respublika-kz.info/) 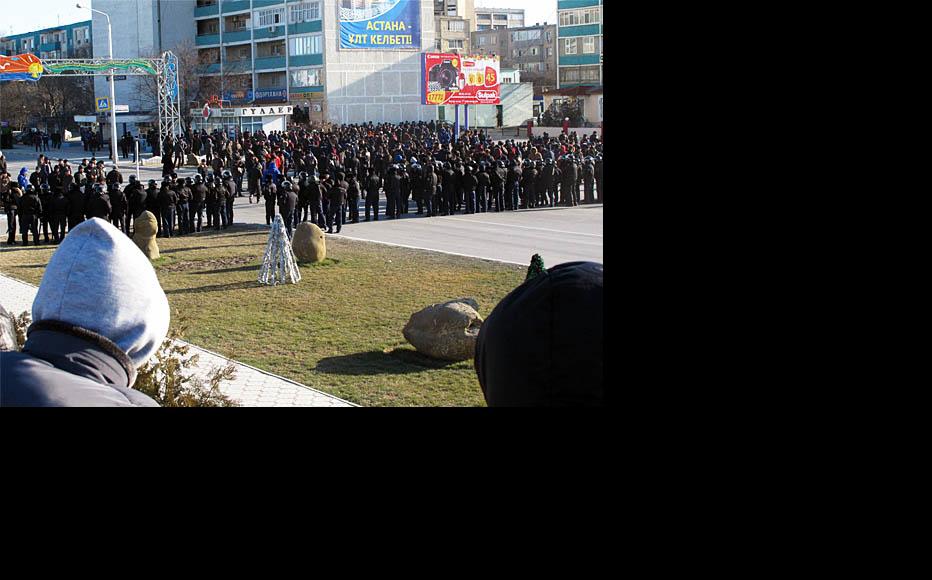 Police and demonstrators face each other in Aktau, a provincial centre in Kazakstan’s oil-rich west. (Photo courtesy of Respublika news site http://www.respublika-kz.info/) 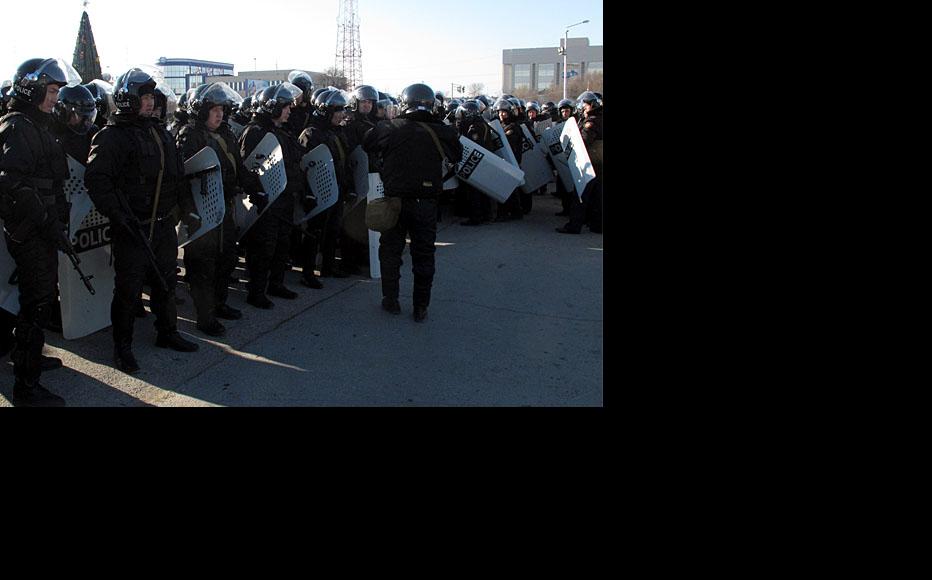 Police units in Aktau with Kalashnikovs as well as riot gear. The Kazak interior minister has warned he will order them to use live fire if there is any trouble. (Photo courtesy of Respublika news site http://www.respublika-kz.info/)
The link has been copied

The unprecedented use of force to suppress demonstrators in western Kazakstan should serve as a warning to President Nursultan Nazarbaev’s administration that continued stability depends on substantive political reforms, a leading analyst says.

IWPR asked opposition politician and political analyst Pyotr Svoik to explain why the violence unfolded and what its wider implications are for Kazakstan.

The trouble began in the town of Janaozen on December 16, the day Kazakstan marked the 20th anniversary of independence from the Soviet Union. Oil workers in the town have been protesting since May over pay and conditions and the right to form their own trade union independent of the authorities. Police opened fire using live rounds, and 14 people died.

Kazakstan’s interior minister Kalmuhambet Kazymov said police were not ordered to open fire, but did so in self-defence against rioters who threw stones at them and set fire to vehicles.

Another man died the following day in Shetpe, a rail junction in Mangystau region, when police went in to disperse local residents who had blocked the railway line in protest at the Janaozen shootings. In the regional capital Aktau, oil workers began a rally in solidarity with their colleagues in Janaozen, starting on December 16 and continuing through December 18.

Kasymov warned that if unrest similar to that in Janaozen developed in Aktau, he would give the order to shoot at the crowd.

IWPR: How should we read what happened on Janaozen on December 16?

Pyotr Svoik: Events in Janaozen are a watershed moment that makes it imperative that the country’s political leadership review its actions and accept the need for major political reforms. Janaozen is both a turning point and a point of no return.

It is no coincidence that the gunfire in Janaozen coincided with festive fireworks at the Ak Orda presidential palace in Astana. There is a seven-month history behind this escalation of a labour dispute into the shooting of civilians. It’s as much part of the reckoning for 20 years of independence as all the ceremonial events are.

If this country had properly functioning trade unions, if Aktau and Janaozen had effective local government, if the government officials responsible for pay and for law and order were independent actors rather than appendages of the presidential administration, if the governor of Mangystau province was at all independent, if the country had a half-way effective parliament, then this situation would never have arisen. In short, there were no mechanisms by which the Janaozen dispute could have been defused by gentler means.

On the one hand, local officials had no real powers to resolve this matter, yet on the other, they regard themselves as very powerful figures who would not deign to negotiate with a bunch of troublemakers. The president himself was never going to go and talk to the oil workers.

There’s a huge danger that now that the authorities have fired shots, they won’t be able to stop and will carrying on shooting till it’s over. This is dangerous for the regime itself and for the whole country.

IWPR: Why did this violence erupt?

Svoik: There may be some truth to the authorities’ assertion that riotous elements planned to make trouble in advance. But it came to a head thanks to the government’s own mishandling of the dispute – because it was unable to apply well-tried dispute resolution methods, because it chose the path of force right from the outset, and because it jailed trade union lawyer Natalya Sokolova. Month after month, it failed to address the concerns of demonstrators.

But this is not only an industrial dispute; there are many other elements to it as well. For instance, it’s safe to assume that one of the factors involved is the struggle between clan groupings within the president’s entourage, which is made up of various warring factions.

These are clans in the modern sense – people bound together through their official posts and business interests and who., once in power, will defend their positions and economic assets – including from others who are in power. They may smile and embrace one another in public, but there’s a ferocious struggle going on between them. The issue of who is to succeed President Nazarbaev is becoming more pressing, so the struggle has heated up massively, and is also playing out at local level.

Initially, the situation in Janaozen developed purely for economic reasons. One could have a long discussion about whether the strikers were demanding too much, since some people believed they were already doing quite well. In any case, this was a social conflict that was never resolved. It’s patently obvious that social provision in that region is lacking.

The economic situation in Kazakstan is still favourable, but soon there will be a second wave of financial crisis, when the situation will get worse not just in Janaozen but in the whole of Kazakstan. If our trade balance goes into the red and if we experience budgetary problems, this will have very significant effects on the authorities’ scope for manoeuvre and on the public mood.

Some analysts predicted that after Independence Day, Kazakstan would start being influenced by outside events, specifically by the recent protest movement in Russia. Yet Kazakstan has been blithely busying itself with the anniversary celebrations and orchestrating the January 15 parliamentary election. Janaozen has shown that this protest wave has already arrived.

IWPR: What will happen now?

Svoik: It appears that the regime isn’t going to learn the lessons from developments in Janaozen. It will conclude it needs to act even more severely, use its resources to orchestrate the election in advance, and create a malleable parliament.

If it does so, however, it will be making a mistake that has harmful consequences for itself. Now is the time to stop maintaining parliament as an ineffectual, decorative form of democracy, and instead assign it some power and responsibility.

Janaozen is an alarm bell, but not a tipping point. So before it is too late, the regime would do well to allow other political forces into parliament . Perhaps the president should leave the Nur Otan party, and instruct his regional governors to do the same. Let the executive maintain public order and do all the other things it is supposed to do. The executive should not be involved in politics.

The oil workers’ case is not political, but politicians have to understand what is going on there. If their problems are left unaddressed, only the opposition will gain from it. The oil workers are like the tinder that has inflamed the political situation.

Everything in Kazakstan is a lot more fragile than in Russia. It’s all dependent on President Nazarbaev, and the succession issue remains entirely uncertain. I believe the weakened hierarchy of presidential power needs to be augmented by the element of choice, in the shape of a strong parliament. If that doesn’t happen, we have troubled times ahead of us.

If the administration pretends that it’s on top of everything, if it somehow resolves the Janaozen dispute and finds jobs for sacked workers, but then goes on to allow only its chosen parties and candidates into parliament, then the succession question will remain unanswered and parliament will remain a useless appendage. We risk ending up with a faltering presidential regime and an ineffective parliament.

There’s plenty more dry tinder around the country, and anyone considering igniting it will have been encouraged by events in Janaozen. All oil industry workers are in roughly the same position, as are miners and metals industry employees. There are many people without jobs or housing in this country. So far they have been quiet.

The conflagration can spread. The tinder won’t set itself on fire, but all it needs is a match and it will go up in flames.

IWPR: How will the international community and foreign investors react?

Svoik: There will be official expressions of condolences, calls for the rule of law to be upheld and so on. The informal response will be more significant. All the political and economic forces that have interests in Kazakstan will conclude that the regime is less sustainable than was the case before Janaozen. There’s also more scope for fomenting instability, though it’s unclear who would take advantage of that. Power has weakened after Janaozen, and power means the president in Kazakstan.

It may affect investments, as well. Work on the Kashagan oil project is just finishing at a location fairly close to Janaozen. That’s a 1.5 billion US dollar investment to date. It’s understandable that the investor and major states behind the Kashagan project are going to be extremely worried. They won’t stop putting money into Kashagan but they’ll inevitably be on their guard after this.

Pyotr Svoik sits on the governing board of the National Social Democratic Party of Kazakstan, and head of the non-government Anti- Monopoly Commission for Almaty. Interview conducted by Dina Tokbaeva, IWPR editor for Central Asia based in Bishkek.