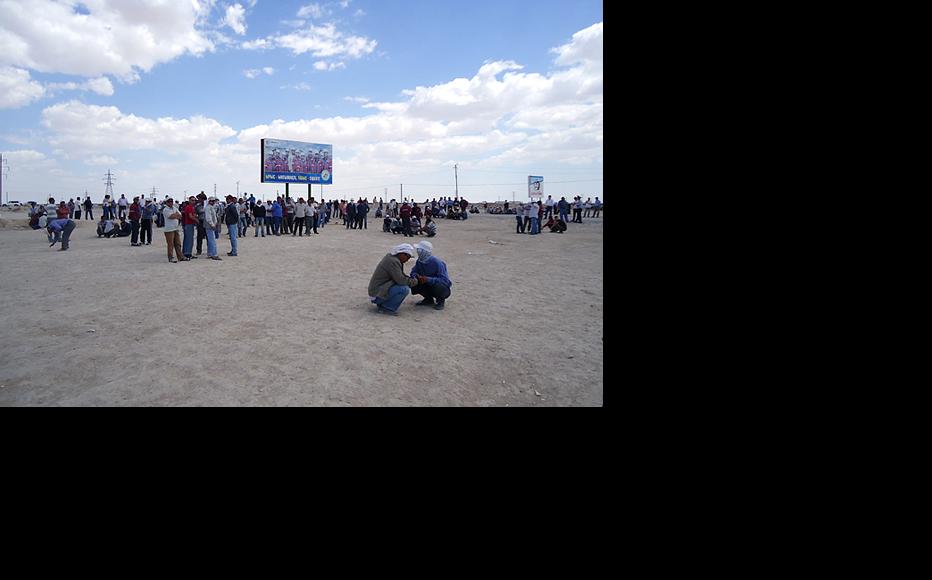 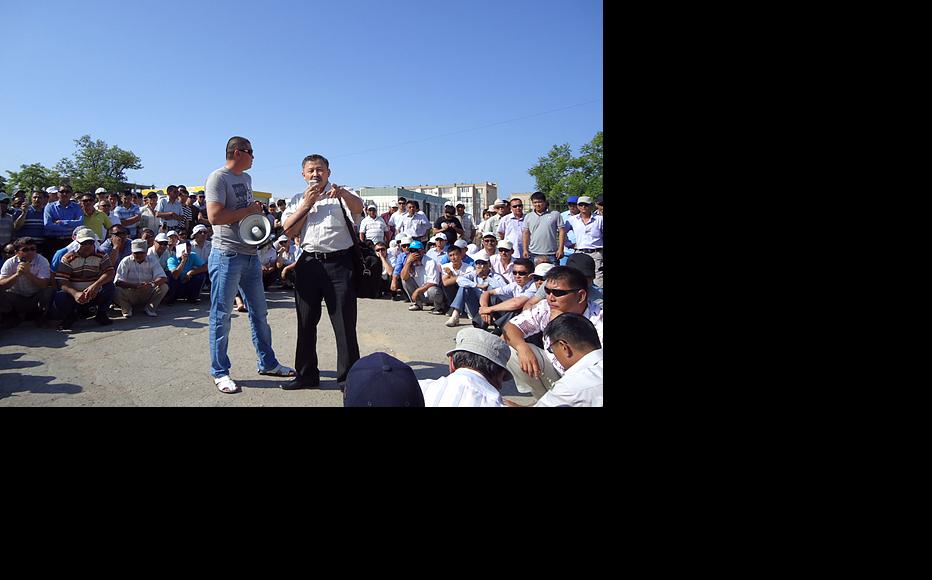 Protest in Aktau involving staff of the Karazhanbasmunai company. To date this has been the most protracted of the strikes sweeping Kazakstan's oil industry. (Photo: Zhanna Baytalova)
The link has been copied

The uncompromising and heavy-handed response to a rising wave of strikes across Kazakstan’s oil sector is doing nothing to promote a settlement, and instead threatens to turn an industry-specific protest into a broader grassroots movement.

Over recent weeks, hundreds of oil workers as well as drivers and ancillary staff at companies in the west of Kazakstan, where the economy is based largely around oil and gas extraction, have joined what began as small-scale strike actions in May.

There are varying estimates of the total numbers involved. Aynur Kurmanov, who heads a socialist movement called Kazakstan-2012, puts the overall figure at 12,000.

The protests began on May 9 at Karazhanbasmunai, a Kazak-Chinese joint venture, and escalated into a full-scale strike there in less than a week.

Workers demanded recognition of their independent trade union and the same pay as staff at another firm, Ozenmunaigaz, where wages were increased last year following protests in the town of Janaozen. One Karazhanbasmunai protester was quoted by local media as saying he was being paid half the amount his counterpart at Ozenmunaigaz would get.

Management at Karazhanbasmunai filed a legal action and on May 24, a court ruled that the protest was illegal.

Union lawyer Natalya Sokolova was detained the following day and charged with holding an unauthorised demonstration, and later – on the day when she was supposed to be released – accused of “inciting social discord”.

The Karazhanbasmunai strike continues, with calls for Sokolova’s released added to earlier demands.

At the same time, starting on May 11, workers with the Ersai Caspian Contractor company – part-owned by Italy’s Eni oil company – began striking for better pay and conditions, for the right to be represented by an independent union, and for wages to be on a par with foreign employees doing the same jobs.

One of the protesters, Karim Jalynov, told IWPR, “There are 250 of us here. We launched a hunger strike on May 21, and since then 42 people have been hospitalised with health problems.”

He went on, “Why are we striking? Because they don’t pay us much, and because of discrimination. I’m a rigger and I am on 60,000 Tenge [410 US dollars] a month, whereas a foreigner doing the same job as me gets twice that amount.”

Jalynov said management had not talked to the strikers, but had sacked 92 of them.

“We’re going to stay until our demands are met. We’ve got nothing to lose,” he said.

Ersai Caspian Contractor says that the protest is illegal and that it will not meet the strikers’ demands. It argues that its staff are paid almost double the average wage in other industries in Kazakstan.

By May 26, oil workers and truck drivers at Ozenmunaigaz had begun their own action in support of a pay claim. They said last year’s wage rises had been eaten up by inflation, and their bonus payments had been slashed.

In the Ozenmunaigaz case, too, a court ruled that the workers’ demands were not justified and their strike was illegal.

As these three strikes continued in the southwestern Mangystau region, industrial action spilled over into the neighbouring Aktobe region, where workers at Aktobemunaigaz – another joint venture with China – started a protest on June 14 against plans to transfer ownership of a further part of the company to the foreign investor. They were concerned that the move would lead to job losses.

For a comment on these issues, IWPR spoke to the public relations department at KazMunaiGaz, the state-owned giant that owns Ozenmunaigaz and also has a half-share in Karazhanbasmunai. It said wages at Ozenmunaigaz had doubled in the last few years, and giving the example of an oilshaft repair worker who would now be on 2,200 dollars a month.

In a June 16 press release, KazMunaiGaz said protests were continuing at Ozenmunaigaz, but the number of staff involved was falling and now mainly consisted of drivers. It warned that protesters now faced dismissal proceedings, and insisted formal negotiations would only become possible once the industrial action ended.

Energy-sector wages are among the highest in Kazakstan, but the work is hazardous and the climatic conditions extreme. The cost of living is also higher as everything has to be trucked in for the oil worker’s settlements.

Human rights lawyer Sergei Utkin said industrial action in Kazakstan had so far generally been confined to the oil and gas sector, a major earner for the country.

He said it was perfectly normal for employees to seek better remuneration, and for employers to resist such demands. He agreed with strikers who argue they are being discriminated against when foreign nationals brought in to work on the same fields receive “incomparably more” money.

What is potentially worrying for the Kazak authorities is that the spirit displayed by the oil industry workforce could spread to other sectors where such open defiance is rare.

The Kazakstan-2012 movement led a nationwide action in support of the oil workers on June 16, prompting statements from staff at major firms like copper-mining giant Kazakhmys and metals conglomerate ArcelorMittal Temirtau, as well as another oil and gas firm, Aktobemunaigas. These statements expressed solidarity with the strikers and made similar claims about their own industries – low and unequal pay, poor working conditions, and the persecution of independent trade unionists.

Andrei Chebotarev, director of the Alternativa Centre for Political Studies, a think-tank, sees a growing politicisation of what began as specific, localised industrial action.

“Initially, the demands the protesters were making were purely social and economic, concerning their relations with management at their various companies,” he said.

Chebotarev said it was the Kazak authorities who heightened tensions by failing to encourage negotiated settlements rather than confrontation, and by allowing the police to get drawn into pressuring union activists.

Meanwhile, Kazakstan’s opposition parties took up the strikers’ cause, adding a further political dimension to the dispute.

Utkin agreed that the authorities had show themselves unable to play the role of neutral third party, and had thus exacerbated the situation.

“The authorities have backed the employer, using heavy-handed tactics against the workers, and trashing their reputations in the state media,” he said. “That isn’t right – the authorities should take a neutral stance and seek a compromise, lawful outcome.”

In this kind of environment, Chebotarev says, if striking groups act in unison and remain steadfast, they have a chance of getting their demands met.

“In any case, the strike movement in Kazakstan is clearly on the rise, and it could force the country’s leadership to rapidly take the measures needed to prevent social tensions deteriorating even further,” he said.

Uzbekistan
Economy
Connect with us