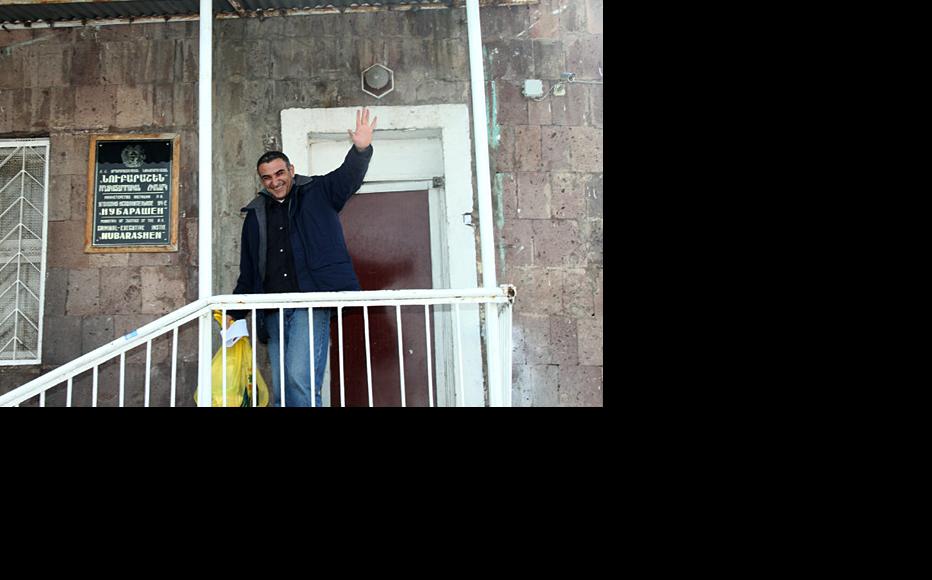 Hayk Gevorgyan after his release from the Nubarashen prison. (Photo: Haykakan Zhamanak newspaper)
The link has been copied

An Armenian journalist has accused police of arresting him in revenge for articles he wrote criticising them.

Hayk Gevorgyan, a reporter for the opposition newspaper Haykakan Zhamanak, spent three days in detention before being released on bail. He is accused of causing bodily harm and leaving the scene of a crime in a driving incident, and could face three years in prison.

Gevorgyan described the incident on January 13 which led to his arrest, “Not only did I not assault anyone, I didn’t even come close. The man whom I supposedly hit was….watching my car as I was reversing. When I realised he’d been sent to cause trouble, I got out, said a few rude words to him, got back in and left.”

The police summoned him to appear to face the allegation, but Gevorgyan said the summons was incorrectly drawn up, so he refused to go. The police then placed him on the wanted list, and tracked him down after ten days.

Gevorgyan says he was hardly in hiding since he lives next door to a police station, and his work as a journalist takes him around most of Yerevan’s government offices.

He linked his arrest to two articles he had written about the head of Armenia’s police force, Vladimir Gasparyan, one of which mocked his nickname while the other alleged that his car did not have the required insurance certificate on display.

“Knowing the current police leadership well, I am 100 per cent certain and in no doubt that the arrest was prompted by these articles,” he said.

He was supported in his suspicions by the head of the Helsinki Committee of Armenia, Avetik Ishkhanyan.

“I think Gevorgyan’s arrest was the police’s own initiative, and it smells like an act of personal revenge by the chief of police,” Ishkhanyan said.

The police denied the arrest was anything other than normal procedure.

“I’m not even going to comment on this since it’s just absurd.” police spokesman Ashot Aharonyan said. “How can it be revenge if it’s about an insurance receipt – would that really be a reason?”.

The arrest caused a storm among Armenia’s internet users. Many journalists changed their own Facebook photos to picture of Gevorgyan, while others set up a special page demanding his release.

Experts said the publicity helped ensure Gevorgyan was only held for three days.

“Journalists and media organisations did well, although there was no action from other citizens - no uproar, no protests, no flash-mobs as there is on environmental issues, for example,” Suren Degeryan, head of the media organisation Journalists for the Future, said. “When people realise that the arrest of a journalist means they are losing their own access to free speech and start fighting against it, that will be the point when I will believe people in our society have begun to appreciate freedom of speech.”

Experts say the pressure on freedom of speech is increasing in Armenia.

According to the Committee for the Protection of Freedom of Speech, local activists registered 49 breaches of the rights of journalists and media organisations in 2011, up from just nine in 2010.

The committee said 2011 also saw an unprecedented number of court cases against journalists, many of them brought by members of parliament seeking libel damages of several thousand dollars. It warned that such lawsuits threatened to destroy the financial foundations of free media, and that journalists might resort to self-censorship in order to stay in business.

The police investigation is continuing, and Gevorgyan said he would fight to clear his name.

“I will work to ensure that all the officers involved in this, and all those who issued the orders, are punished. I think I’ve already proved that I didn’t run over anyone or abandon them [after an accident],” he said.