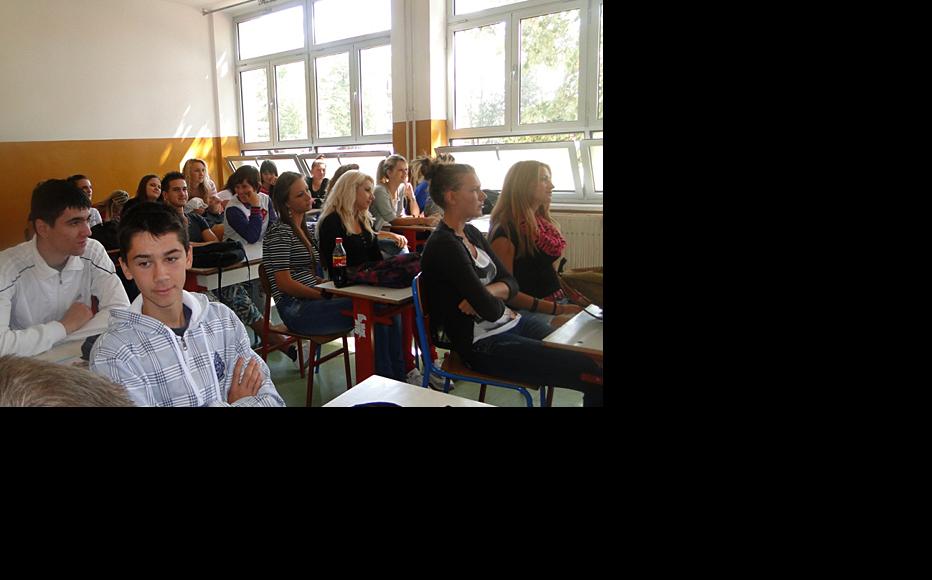 Film screening followed by a discussion in Brčko. (Photo: Velma Šarić)
The link has been copied

High school students in more than 20 towns across Bosnia said they became more aware of the need for coexistence after attending screenings of IWPR documentaries about post-war reconciliation.

IWPR and production company Mebius film released a series of nine short films this year entitled Ordinary People about Bosnians who managed to overcome the trauma of war by working with members of other ethnic groups in areas like art, sports and business.

The films were produced as part of the Ordinary People project, funded by the Norwegian embassy in Sarajevo and implemented by IWPR and its Bosnian partner, the Post-Conflict Research Centre (PCRC).

Over the last few months, IWPR and PCRC have shown these films in high schools and hosted group discussions in 22 towns and cities throughout Bosnia. The audiences, made up of 16- to 18 year-olds from all ethnic groups, were too young to have experienced the war themselves, but old enough to be aware of its consequences.

The main message which IWPR and PCRC tried to convey was that there were ordinary people on all sides striving to get rid of the animosities and divisions created by the 1992-95 war.

In Kakanj, an industrial town in central Bosnia, the screenings formed part of the Week of Education for Peace.

A second-year class of mainly Bosniak pupils in Kakanj agreed that discussing the past was vital to securing a peaceful and stable future.

One pupil, Zerina Kapo, said she thought “someone’s religion, ethnicity, or anything else should never be more important to us than the fact that we’re all just human beings”.

But for that to become true, she said, “we need to get a chance to meet Serbs, Croats and others – and many young people in my environment don’t have that opportunity”.

Kapo’s classmate, Adelisa Husic, who is Roma, agreed that communication was the best way to fight prejudice.

“People usually have some preconceived opinions about Roma and certain prejudices, but when they meet us, they realise that we’re people like everyone else,” she said. “That’s why it is very important to me that we speak to each other and break down the barriers.”

In Brcko, a multi-ethnic city in northern Bosnia, a mixed class of pupils talked about why remembering and discussing the war was so important to their generation.

“For me, Brcko is a great example of people who are willing to ignore their differences when they see the benefits of working and living alongside members of other ethnic groups,” said Sonja Peric, a Serb.

“IWPR’s films showed us concrete examples of the positive changes going on in our communities, which are an incentive to all of us to move forward,” said Petar Maric, another Serb student. “This is exactly the type of project that young people in our country need.”

Views passed on by older generations have an effect on shaping attitudes towards the war.

“Young people are influenced by their parents and elders,” says Nikolina Jovic, also from Brcko. “If parents harbour prejudices against other ethnic groups and religions, they will pass them on to their children. I feel that the problem is more evident in families who suffered the loss of a relative or a friend, because they hold more animosity towards other groups who they believe are responsible for that loss.”

Screenings also took place in Vlasenica, a small town in the east that had a mixed Bosniak-Serb population before the war, but today is almost exclusively Serb.

Srdjan Vukicevic, 17, said he liked the two films he saw – A Letter, a documentary about hip-hop music as a counter to nationalism, and Ina's Path, about how a Dutch therapist helped war-disabled from different sides,

For him, the films served not only as a reminder of Bosnia’s tragic recent past, but “more importantly, how crucial it is to find something that we have in common and to have a positive attitude”.

“The war has left us with a legacy of hatred and mutual animosity that we need to overcome,” he continued. “But in order to achieve that, we need to understand that we have more in common than we realise and that we’re all in fact very similar.”

His classmate, Nevena Ristanovic, said the next step should be to provide young people from all ethnic backgrounds with opportunities to meet regularly.

“Someone should bring pupils from schools in various parts of Bosnia together – Bosniaks, Serbs and Croats. We should sit together, talk, and build our future together,” she said.

In the neighboring town of Bratunac, also populated mainly by Serbs, most of the pupils who watched the films came to a different conclusion – that it would be better to leave the past behind and concentrate on the future, as reviving wartime memories risked damaging reconciliation.

“This is the first time I’ve seen documentaries like these ones produced by IWPR,” Njegos Peric said. “I think friendship is the key to everything, that Bosniaks and Serbs should be friends, but also that whatever happened in the past should be forgotten so that we can stop focusing on our differences.”

Ante Zovko, a Croat pupil from the small town of Zepce in central Bosnia, took a similar view, saying that “there are some people in this country who are preventing it from moving forward by continuously blaming ‘the others’ for all the pain they’ve been through. That is ruining our future.

“Each ethnic group in this country has to stop monopolising the pain.”

In many of the schools where screenings were held, the negative role of the Bosnian media in the post-conflict period was discussed.

“The media constantly bombards us with quarrels and personal conflicts among politicians who are sending out the message that this country has no future and that we have no chance of living together peacefully,” said Nikolina Jovic from Brcko.

A Serb pupil from Srebrenica, Dragutin Jovic, said he was initially sceptical about the IWPR films he was about to see.

“I thought it would be just another attempt to brainwash us,” he said.

However, he changed his mind after watching A Letter.

“It showed me that we’re all human beings and that we all make mistakes and need to learn from them together,” he said. “We need to be able to face up to the past and realise that although forgiving is more difficult than just forgetting, it is far more important for all of us.”

Velma Šarić is an IWPR-trained reporter in Sarajevo.