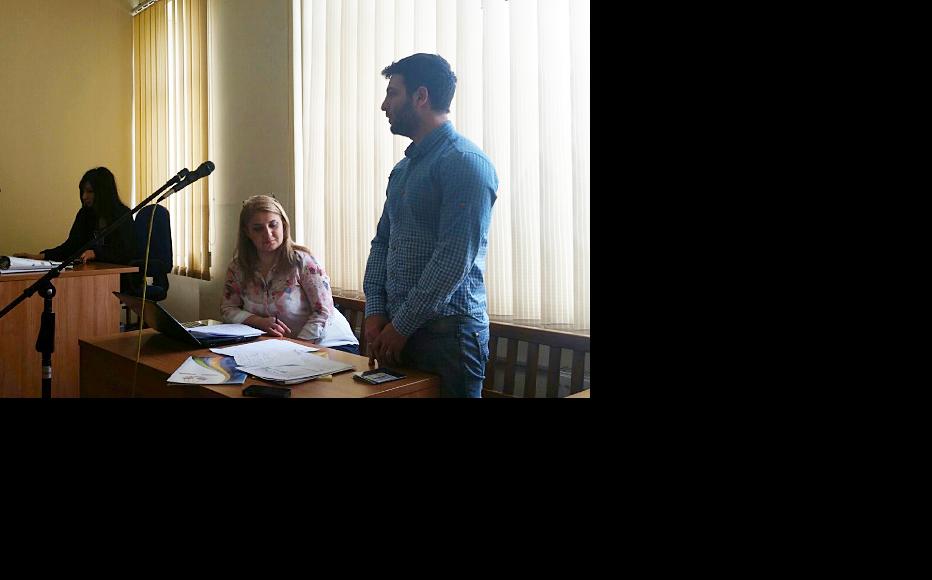 Arman Sahakyan (right) in court with his lawyer Maro Khachaturyan. (Photo: Nor Serund)
The link has been copied

Recent court battles have revealed a gap in the law in Armenia, where members of sexual minorities are not protected against hate speech and discriminatory comments.

This week, a district court found against the Iravunk newspaper in a case brought by three individuals who alleged that it had made defamatory and discriminatory comments about them on grounds of sexual orientation.

The three plaintiffs, Arman Sahakyan, Hovhannes Mkrtchyan and Grigor Gevorgyan, took legal action concerning an article the newspaper’s chief editor Hovhannes Galajyan wrote in May 2014 calling for “zero tolerance” of gay people, who he said “served the interests of an international homosexual lobby”.

The article went on to name 60 people as “enemies of the people and the state”. Galajyan called on public- and private-sector employers not to hire any of the 60 individuals and urged both the media and educational institutions not to give them opportunities to make themselves heard.

When people named in the list threatened to sue the newspaper and its editor, the newspaper published more articles containing homophobic slurs.

The Kentron and Nork-Marash district court in the capital Yerevan ordered Iravunk to publish on its website a retraction of the May 2014 article, which it deemed defamatory, and instructed Galajyan to pay the plaintiffs damages of 250,000 drams (500 US dollars) each.

The May 14 ruling came as a surprise given that in March, Armenia’s highest court of appeal rejected a case brought by 16 other individuals who alleged that Iravunk had defamed and discriminated against them in the same manner.

The appeals court ruled that the 16 plaintiffs’ rights and reputation had suffered no damage as a result of the Iravunk material, which it said fell within the editorial right to freedom of expression.

Galajyan says he was the victim of a “homosexual lobby” trying to silence comment, and that there are legal precedents for journalists to use robust forms of expression.

He was defended by Hovhannes Sahakyan, a politician from the ruling Republican Party who sits on parliament’s legislative committee.

“As a well-known journalist who shares the national mindset, Galajyan was merely expressing his point of view in exactly the same way as minorities do,” Sahakyan said. Under Armenia’s laws, sexual minorities have “no particular privileges, but nor is there any discrimination”, he said.

This week’s ruling could yet be overturned by a higher court, but it could set a precedent nonetheless.

Even so, rights groups following the case urge caution. Haykuhi Harutyunyan, head of the NGO Protection of Rights Without Borders, points out that no one has read the fine detail of the ruling yet.

“If the verdict states that this [article] was merely insulting, and it doesn’t mention discrimination or hate speech, then it won’t constitute a precedent,” she said.

For Harutyunyan, Galajyan’s defence argument was made possible by the absence of anti-discrimination legislation in Armenia.

Hate speech is covered by Article 226 of Armenia’s Criminal Code, but it is defined there as ethnic, racial and religious terms, with a rising scale of penalties if it occurs in private, in the public domain, and if violence or threats to violence are involved.

Justice Minister Hovhannes Manukyan has said his staff are considering whether a special law is needed, and if so how the drafting process should proceed.

“We need to understand whether it’s expedient to pass such a law at all,” he told an IWPR reporter at a discussion event hosted by the Eurasia Partnership Foundation last month.

Armenia’s ombudsman submitted a draft anti-discrimination law two years ago, but although informal consultations were held, it did not make it into parliament.

The ombudsman’s deputy Tatevik Khachatryan points out that cohesive anti-discrimination legislation would benefit everyone, since the various laws that touch on the matter are disjointed and not applied properly.

“This kind of law is not passed in order to protect one specific social group,” she said. “Passing an anti-discrimination law will protect all citizens regardless of sex, social status, health, political views or other things,” she said.

Sergei Gabrielyan heads the charity Nor Serund (New Generation) to which Sahakyan and some of the others named in the Iravunk article belonged. He argues that the government has shown no will to broaden the definition of hate speech through new legislation.

As evidence of the lack of political interest, he notes that despite the newspaper being embroiled in court cases, its director Hayk Babukhanyan, a Republican member of parliament, was awarded a state honour by President Serzh Sargsyan last October.

Boris Navasardyan, chairman of the Yerevan Press Club, fears that Armenia’s entry to the Eurasian Economic Union, which happened this January but has been in the making since 2013, has encouraged retrograde legislative moves inspired by Russia

“The rejection of the lawsuit brought by 16 individuals [in the Iravunk case] is a consequence of the general political climate,” he told IWPR. “The standards required by human rights conventions are not being applied because of the geopolitical choice Armenia made a year-and-a-half ago.”

Amnesty International’s latest annual report says the draft anti-discrimination law was required by the Association Agreement which Armenia was hoping to sign with the European Union, but was put on ice after President Sargsyan’s September 2013 announcement that the country would seek to join Moscow’s trade bloc.

“Since we joined the Eurasian union, Armenia has been trying to borrow the policies and attitudes towards the LGBT community that exist in Russia,” Gabrielyan said. “Armenia doesn’t yet have the shameful law on [gay] propaganda that Russia passed, but it has already been passed in Kazakstan. (See "Gay Propaganda" Ban for Internet on how the Kazak law  was brought in under the radar.)

However, there are signs that the door to closer relations with the EU is far from closed, a factor which could temper some repressive inclinations. (See Armenia Seeks New Deal With EU.)

Dirk Lorenz, head of press and information at the EU delegation in Yerevan, said a commitment to human rights reforms was set down in an agreement reached with Armenia at the recent summit in Vilnius, and this would be firmed up in a bilateral agreement still to come.

“Irrespective of Armenia’s choice to join this or that bloc, both parties [EU and Yerevan] are prepared to continue cooperating in the sphere of human rights in Armenia,"  Lorenz said.

Parandzem Avagyan and Lilit Arakelyan are freelance journalists in Armenia.