Limited benefits from joining Russian-led economic bloc seem to have prompted Yerevan to re-engage with Brussels.

Limited benefits from joining Russian-led economic bloc seem to have prompted Yerevan to re-engage with Brussels. 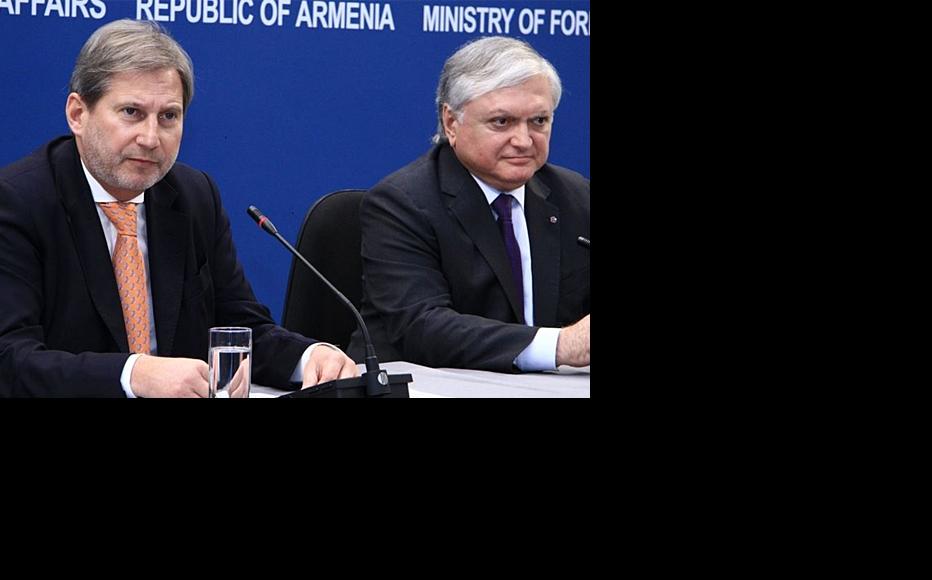 The European Union and Armenia are getting closer to signing a new cooperation agreement, indicating that Yerevan’s membership of a Moscow-led trade bloc may not be an insurmountable obstacle to closer ties.

Plans for an Association Agreement were abandoned in 2013 after Armenia decided to join the Moscow-led Customs Union. EU officials made it clear the trade terms and tariffs of the two blocs were incompatible. The Eurasian Economic Union, with a broader remit, emerged last year and when it was launched this January, it included the original Customs Union members – Russia, Belarus and Kazakstan, plus a new one, Armenia.

Armenia’s enthusiasm for renewed talks with the EU, which are likely to be authorised later this year, may be a sign that its experience of the Eurasian union has so far been disappointing.

Johannes Hahn, European neighbourhood policy and enlargement commissioner, visited Yerevan in March for talks with the president and foreign minister.

Hahn said that the EU and Armenia had completed a joint “scoping exercise” that identified potential areas for cooperation. He said the results would go to the 28 EU member states so that a mandate for negotiations could be agreed, and talks on a new EU-Armenia deal could begin soon.

“The EU is working on special terms for cooperation with Armenia. This agreement is proof our attentions are serious,” he said.

Stepan Grigoryan, head of the Analytical Centre on Globalisation and Regional Cooperation, predicted that any new deal would not be as far-reaching as the original Association Agreement. He added that the focus appeared to be on issues of democracy, human rights and judicial cooperation.

“However, what’s important is that Armenia and the EU have reached a new agreement,” he continued. “Why has Armenia returned to negotiations with the EU so soon? Because the first few months of Eurasian Economic Union membership have shown that Armenia has not acquired the kind of stability, in economic and security terms, that Russia promised.” (See also Armenia Looks West as Eurasian Project Frays .)

Joining the Eurasian union was supposed to help modernise and diversify the Armenian economy. Infrastructure plans that were mooted included investment in new nuclear power plant and building a rail link with Russia.

But in the last 18 months, only one item on the wish-list has been agreed. In February, Russia and Armenia signed a deal under which Moscow will provide a 270 million US dollar loan and a 30 million dollar grant to renovate the Metsamor nuclear power plant and extend its operations until 2016.

However, the same month, Russia turned down Armenia’s request for a desperately-needed loan.

Armenia was badly hit by the 2008 economic crash, and received a 500 million dollar loan from Moscow the following year to help it weather the crisis. But talks on further assistance broke down in February 2015, and Yerevan was forced to issue a 500 million dollar international bond with a yield of 7.5 per cent, the most expensive in the country’s history.

Armenia’s security situation has not improved, either. In January, the same month the Eurasian Economic Union came into being, there was a sudden rise in clashes on the Armenian-Azerbaijani border and on the “Line of Contact” around Nagorny Karabakh. Armenia has historically seen Moscow is the ultimate guarantor of its security, but its leaders have been expressing concern about Russian arms sales to its wealthier neighbour. (See Karabakh Truce Shaken by Gunshots and Tough Talk .)

Stepan Safaryan, the director of the Armenian Institute of International Security, said that given recent events, it was no coincidence that Armenia was keener to forge closer ties with the EU than Azerbaijan and Belarus, which like it are members of EU’s Eastern Partnership but have not signed Association Agreements.

“This is also due to the interests of the EU, which has revised its strategy in the post-Soviet region in parallel with the crisis in Ukraine and is starting to apply an individual approach to each country,” he said. “Last November, Brussels decided to allocate 170 million euro to Armenia over the next three years, for reforms in a number of areas. That’s an important figure.”

The new talks between Brussels and Yerevan may be officially announced during a May 21-22 summit between EU leaders and Eastern Partnership countries in Riga.

During a visit to Italy on April 10, President Serzh Sargsyan said relations with the EU would be “taken to the next level” after the Riga summit.

“[We] are natural partners because our partnership is primarily based on values. The Armenians and Armenian civilisation are part of European civilisation, and our government has undertaken to promote these values,” he said.

Safaryan noted that security issues were high on the agenda for Armenia.

“Armenia is a small country that is trying to diversify its security arrangements. In this sense, a good relationship with the EU has always been one of the pillars of our security,” he said. “So it is understandable that Armenia is in a hurry to restore relations with the EU.”