Those who survived Saddam's chemical attack two decades ago feel badly let down by the Kurdish authorities.

Those who survived Saddam's chemical attack two decades ago feel badly let down by the Kurdish authorities. 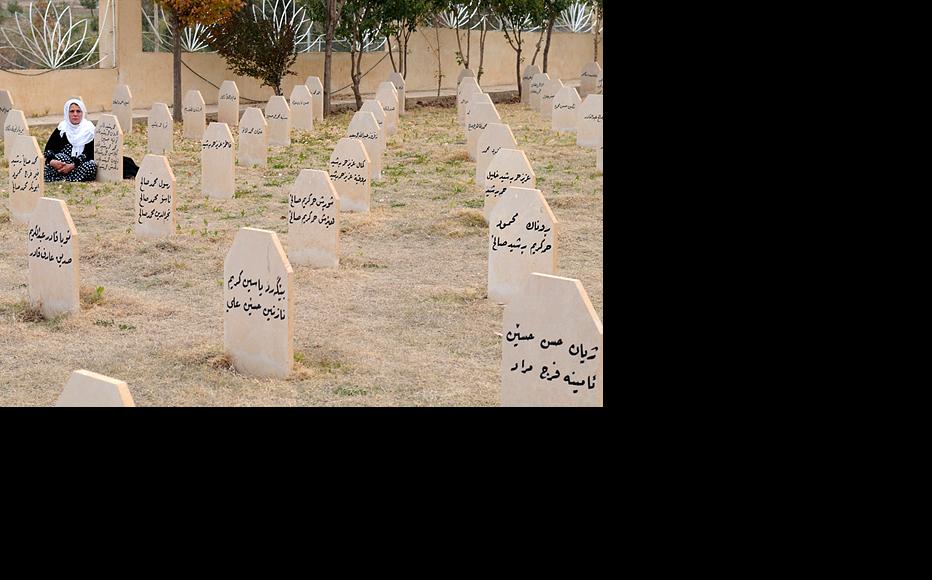 Halabja struggles to move on 23 years after Iraqi military forces bombarded the Kurdish town with chemical weapons. (Photo: Kamaran Najm/Metrography)
The link has been copied

Driving into Halabja, there is little evidence of the anguish and devastation that have afflicted this Kurdish town for the past two decades.

There is a small football stadium (unfinished), a hospital in the distance (understaffed) and a controversial monument towering 100 feet skyward, with a Kurdish flag planted at the top. The town is set against a backdrop of stunning, rugged mountain ranges that stretch into nearby Iran.

Twenty-three years ago, hell rained down on Halabja. Baathist warplanes blanketed the town with chemical weapons - including mustard gas and the deadly nerve agents VX and sarin - killing an estimated 5,000 people and injuring another 10,000.

Halabja was not the first Iraqi town that Saddam Hussein's regime assaulted with chemical weapons, and it would not be the last. It was, however, the largest-scale chemical attack on a civilian population, and left a legacy of death, poverty, illnesses and grief that haunts residents today. After the attack, Halabja became emblematic of the Baath regime's atrocities against Iraq's Kurdish minority.

I first visited Halabja in the autumn of 2005 with my future husband, Mariwan, who was born and raised here with his ten siblings. Like most families, his relatives live in a modest, four-room home with a detached kitchen and bathroom, and a small garden courtyard scattered with fruit trees.

Halabja's famously succulent pomegranates ripen as temperatures drop in the fall, and pomegranate trees are dotted along hills on the margins of the town. On my first trip to Halabja, we drove through groves of fruit trees and up the mountain near the Iranian border.

I was tempted to hike, but Mariwan dismissed the idea as ludicrous. As a border town, Halabja was frequently in the firing line during the Iran-Iraq war and its mountains are littered with land mines. The attack was carried out at the height of the conflict, when Iranian forces had seized the town.

The incident made Halabja infamous, and it is not an episode that people want to remember. Survivors will speak to the media, and especially the western press, in the hope that the coverage might improve health care or provide better services. In private, however, victims are reluctant to recall March 16, 1988.

They survived by putting one foot in front of the other - by fleeing up the mountains in the dead of night to Iran; by seeking shelter in refugee camps; by not causing trouble when they were granted an "amnesty" and allowed to return home three years later.

My husband's family has spoken to me just once about the aftermath of the attack, which killed several of his relatives. They do not discuss the actual bombardment, and neither do most of their friends, neighbours and relatives. Horrific images of the attack, taken mostly by Iranian journalists, show bodies of civilians who tried to run for shelter slumped in the streets, in cars, in houses, their mouths gaping and eyes bulging. Many are children.

My mother-in-law was eight months pregnant at the time, and described climbing the mountain with thousands of people who escaped after the attack, hearing women scream as they gave birth. The survivors were hiding in the dark, and feared the noise would draw the attention of Iraqi jets circling the mountains, ready to attack. She had nine children at the time, and some, including my husband, were briefly separated from their parents in the chaos.

Survivors were treated in Iranian camps for ailments ranging from respiratory problems, blisters to abnormal growths. A British medical team that studied Halabja in the 1990s reported survivors continued to have substantial health problems, including high rates of cancer, miscarriages and severe respiratory ailments.

Aside from Halabja's handful of activists, few speak of the illnesses. My sister-in-law, who was injured in the attack and whose son was born with multiple health problems last year, was shocked to learn that many children of victims suffer birth defects, even today. Her son lived for nine months, including 35 days on life support, before succumbing to heart and lung failure.

At his wake, we learned of another tragic story: a close family friend had lost his battle with cancer, and would be buried that night. He was 28. A few months prior, a relative in his twenties had also died of cancer.

The victims receive rudimentary care in Iraqi Kurdistan's cities, or, if they have the financial resources and are granted visas, in nearby countries. Halabja's medical care is woeful: there are so few doctors that many rely on a town nurse to treat their ailments.

Doctors throughout Kurdistan don't take patients' histories or speak to survivors about the medical effects of the chemicals - probably because they couldn't help much anyway, given their limited access to treatments. Aside from the studies in the 1990s, no one has tracked the cases. Yet people quietly wonder: are these disturbing patterns because of the attack?

Survivors and their children suffered in silence for years before unleashing their fury on the Kurdish authorities. Critics accuse officials of exploiting Halabja's legacy - including bringing in foreign dignitaries - while ignoring the town's needs. Five years ago, anti-government rioters torched the victims' memorial on the anniversary of the attack. It had become a symbol of the government's politicisation of Halabja and its neglect of the town.

Officials quickly rebuilt the memorial but this year decided to hold the commemoration at a newly-constructed football stadium at the edge of town. The ceremony drew hundreds of government employees, officials, schoolchildren and some victims. It was briefly disrupted by one survivor, who hurled his prosthetic legs toward Kurdistan's prime minister and yelled, "You're all liars! Where are our rights?"

Meanwhile, in central Halabja, at least 1,000 citizens flooded the streets, demanding the government provide more support for the town.

The anger constantly simmers beneath the surface, and is not only directed at the local authorities. Many argue that the international companies that supplied the chemicals should compensate victims, and lawyers have spent years trying to gather evidence to take the firms to court.

Halabja enthusiastically supported the United States invasion of Iraq, and after United Nations sanctions were lifted, the economy had nowhere to go but up. Despite this, the town is poor and the tens of millions of dollars allocated to reconstruction haven't made much of a difference. Between 70,000 and 80,000 people once lived in Halabja; the number is believed to be about half that today.

Survivors receive almost no medical or financial support. There are heartbreaking stories of victims who lost dozens of relatives living in squalor.

The town feels like a throwback to another time. Since the 2006 riots, the government has paved some of Halabja's dirt roads and a university is under construction, but as in the rest of Iraq, little else has improved.

Twenty-three years later, some houses are vacant or lie in a pile of rubble. Students attend classes in shifts. Electricity is still intermittent. Families spend hours sitting in the dark, gossiping and complaining about politics. There is no entertainment aside from a handful of internet cafes and a few landmine-free mountains, where families play in the snow in winter and picnic in the late spring and early autumn.

Despite the challenges, Halabja has made strides. The young generation that survived the chemical attack is the best-educated in the town's history, and many have obtained university degrees. This is an impressive feat given that much of the older generation worked in agriculture as children and are illiterate. While young men have left in droves to seek better job opportunities, many women - who traditionally stayed at home or worked on farms - are educated and have careers.

In this sense, there is a glimmer of hope for Halabja's future. They do not have the resources to build up the infrastructure and hospitals, to treat the ill or to conduct research on the long-term effects of the chemical attack. What they do have is the ability to survive, to put one foot in front of other. This sheer determination to forge ahead toward a better future, and overcome a tragic legacy, is what defines Halabja's identity today.

Iraq
Regime
Connect with us