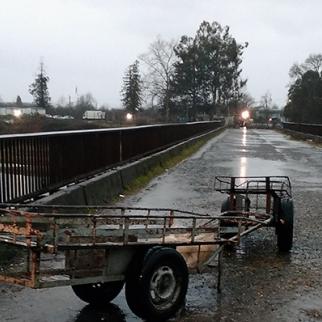 Nanuli Zantaraia took her life in her hands in early February when she attempted to bypass the Enguri checkpoint to cross into Georgian-controlled territory with her seven-year-old son and other relatives.

“Russians were chasing us with dogs,” said the 41-year-old. “Fortunately, they could not catch us. We all jumped into the river, the water was cold like ice, but at least we were safe.”

Zantaraia is one of thousands of residents of occupied Gali who have recently risked arrest or serious harm to cross over into Georgian-controlled territory.

According to the Abkhazian news agency Apsnypress, between January and April 2021 the authorities detained up to 3,000 residents of Gali for crossing the de facto border.

Movement on the Enguri Bridge has been restricted since February 2020 when the de-facto Abkhaz authorities decided to close the bridge after the first case of Covid-19 was reported in Georgia.

The Enguri Bridge, the sole road connecting occupied Gali with the rest of Georgia, was opened only five times last year, for three days each time.

About a month ago, pensioners, people with disabilities and parents of large families were allowed to cross the bridge to receive their monthly allowances and other services in Georgia.

But until recently, anyone who wished to stay in Georgian-controlled territory had to spend five days in a state-run quarantine facility.

According to the statistics provided by the representatives of the Abkhazian administration in Samegrelo region, when the bridge was open about 1,700-1,800 people crossed it on a daily basis.

Before March 2017, there were six checkpoints in Gali, but since then only the central Enguribridge and the Saberio checkpoints have remained open.

A source in Gali who asked to remain anonymous said that in recent years the Russian military had detained many people for so-called illegal border crossings. According to the official data, in 2017 they arrested 671 people, with 453 detained in 2018 and 148 the following year.

“The number of arrests decreased because all the checkpoints were closed and only one was left,” said the 51 year-old Gali man. “The population of Gali no other choice but to apply to the so-called Gali administration to receive the necessary documents allowing them to move freely. They can get either a form number nine which is valid for one month or a residence permit which is valid for five months. Both are issued by the Abkhazian ministry of internal affairs in Gali and the prices start from 1,500 rubles (20 US dollars.)”

According to current data, there are about 45,000 Georgians living in Gali but of these only 849 have Abkhazian passports.  All others need to obtain either a form number nine or a residency if they want to cross into Georgian-controlled territory, however briefly.

The source said that many in Gali were able to receive residence permits and so illegal border crossing significantly decreased. But when the central Enguri bridge was closed last year and the five-day quarantine imposed, the number of arrests quickly climbed to 2,325.

When detained, people are first taken to a Russian military base before being transferred to detention in Gali in military trucks.

In the case of a first arrest for illegal crossing, the fine is 3,000 rubles (40 dollars). For a second detention the fine is 4,600 rubles (60 dollars) and a third arrest could include imprisonment for 15 days or prosecution.

“But they prefer for us to pay money, so locals are mostly fined,” the source said. “When we need to go across the river, we choose to take a bypass route over the river Enguri. The whole perimeter, from the village of Pichori to the village of Saberio, is about 65 km long and at least 100 people are detained by Russians in this area everyday. So, multiply 100 by 120 GEL, this is how much is paid into the Abkhazian budget every day.”

Those who cross the river illegally face arrest as well as potentially drowning if they miss the safe place to ford the river. Guides can be hired to help locals find a safe passage through the area. The guides know the paths and are familiar with the shifts of the border guards, charging between 40 to 100 GEL (10-30 dollars), depending on how dangerous the route is.

On April 7, one such trip ended in tragedy when 62-year-old guide Tamaz Baslandze and three other Gali residents, all members of one family, attempted to cross the river at night.

Raduga Gvalia, whose brother Elguja drowned in the river along with his wife and cousin, said that the group had been trying to cross via a ford at 5 am when the river dam was opened and the water swept them all away.

“As we were later told, the Russians noticed them and chased them with dogs. Although they managed to cross into the river, unfortunately the level of the water increased and they drowned,” Gvaliasaid.

The administration of the Enguri hydroelectric power plant issued a statement after the incident, stating that the increased water levels in the river were due to heavy rains and not to any discharge released by the plant itself.

Following the tragedy, Tbilisi cancelled the mandatory quarantine and established a testing site instead for those crossing the Enguri bridge into Georgian-controlled territory.

Analyst Paata Zakareishvili said that the de facto head of the Gali administration, Konstantine Pilia, had raised the issue of easing border restrictions for locals with the Russians but to no avail. He said the quarantine had also been a bad idea.

“The incidents increased because of the rigid approach of the Georgian side, Abkhazians have a rigid approach too and it turns out that they are bad and we are bad as well,” he said. “This made the situation extremely difficult for the population of Gali.”

Giving Voice, Driving Change - from the Borderland to the Steppes
Georgia, Abkhazia
Detentions, Coronavirus
Connect with us