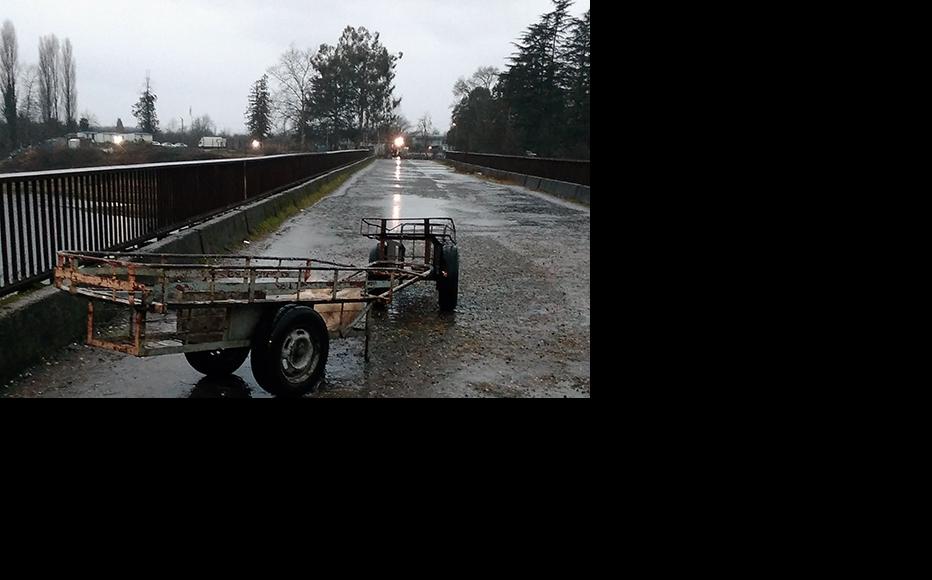 The Otobaia-Orsantia Bridge, where Otar Jobava's corpse was found. (Photo: Tamuna Shonia)
The link has been copied

The ongoing closure of the Enguri River crossing to Georgia’s breakaway region of Abkhazia is leading residents to make ever more dangerous attempts to reach Georgian-government controlled territory.

The bridge on the river, the only road connecting the territories, has been closed for months now due to the coronavirus crisis. Tightened control over the land border has meant some are trying to swim across the river, with potentially tragic consequences.

On August 26, the body of 65-year-old Otar Jobava was found in the Enguri river near the borderline village of Orsantia. According to a family member of the deceased, who asked to remain anonymous, Jobava had been trying to reach Zugdidi to get his pension by the only available route - swimming across the river.

“This is how we have to travel in our own country,” the relative, Nodar, said. “We either have to walk several kilometres by taking detours or swim in the river, secretly, risking our lives. We are hiding from Russians and Abkhazians so that they cannot catch us. We have been locked up for so many months.

“Earlier, we somehow managed to take detours, we called each other on the phones and told them it was ‘clear,’ but now the entire perimeter is controlled by Russians and Abkhazians,” she continued. “Now, this river is our last resort, which is very risky. I am so sorry for Otar. He wanted to get his pension and give it to his grandchild who recently became a student.”

The lockdown has posed many problems for the Georgians living in breakaway Abkhazia. Between 50,000 and 60,000 Georgians live in Abkhazia, mostly in the Gali district and its nearby villages. This accounts for 20 per cent of the population of 245,000.

One side of the checkpoint is controlled by Georgian law enforcement forces and the other by Russian troops and Abkhazian customs officers. Residents of Gali and its adjacent villages were previously able to cross the bridge daily for medical, educational, commercial and personal purposes. Up to around 30,000 people each month used to cross the de facto border, which runs 77 kilometres from the village of Pakhulani to that of Ganmukhuri, although the land section is only seven km long.

Movement across the Enguri bridge was first restricted on February 27 by the de-facto authorities after the appearance of the first case of Covid-19 case on Georgian-controlled territory. Left without an official means of crossing during this period, Georgians had little choice but to make the journey through unofficial and mostly very risky means.

Darejan, another Abkhazia resident, related how a family member had struggled to access healthcare in Georgian territory after being diagnosed with a brain tumor that required urgent treatment.

“My relative, who is a teacher in one of the schools in the lower zone village of Gali, was diagnosed with a brain tumor in Sukhumi two weeks ago,” Darejan said. “We showed the documents at the border but she still was not allowed to cross it. That is why she had to swim across the river at 4am with the help of her neighbours. She was lucky. Abkhazian border guards did not notice her.

“When I called her she told me that she had a terrible night and barely survived. We know the area well, but when you cross the river in darkness and silently, it is very risky, you may slip or fall into a hole in the sand or simply miss the ford.”

Most residents use Form 9, but to obtain this they must go to the local administration in Gali to receive documents which sometimes takes months. Many prefer to take unofficial routes to cross.

However, in recent years, barbed wire has been put up around the perimeter and cameras have been installed, making it impossible to cross during the day.

This means that people take a detour, mostly between 12am and 5am, which is very risky. Since control over the land border became much tougher, the majority prefer to swim across the river at night, which becomes nearly impossible in the winter.

Iuri, another resident, said that if the bridge closure continued much longer, Abkhazia might face a humanitarian crisis.

“If a child gets ill, you will not find a good pediatrician in the area, not to say anything about cancer patients, everyone has to seek medical assistance on the other side of the bridge, and it has been closed for so long, for almost six months,” she said.

“I have no idea what we shall do. No one is helping us. We were unable to get our monthly allowances and are left without income. Everything is expensive here. We sell cheese and other agriculture produce across the Enguri but now we are under siege now. People won’t stand it for a long time. In summer at least we have fruits and vegetables, but what will we do in winter?”

She added that the constant military presence had made life much harder for them.

“After the August War in 2008, when the Russian so-called blue helmet peacekeepers were replaced by the Russian FSB [Federal Security Services] forces everything got tougher than before,” the woman continued. “Now there are nine villages along the riverside and Dikhazurga is the only village where Russians do not have a military base. In all other villages they are present with sound infrastructure and well-equipped with high-level modern means of communication.

“This is the Russian FSB and a military unit which has a certain function, and we are a colony, Gali is a colonial settlement. What else can we call it, when people do not have the right to sell or buy their own property, and participate in elections? What else can we talk about here?  We are nothing. The word ‘occupied’ 100 per cent fits the situation we live in,” she concluded.

Georgians living in Gali said each side blamed the other for keeping the border closed.

“Both sides blame each other, but the population of Gali is the one to suffer, we cannot move freely,” said one elderly resident, Indiko. “I worry about the students who are stuck here and are left with only one option - to take a risky path; the government is not worried about the fate of the young generation at all.”

The Autonomous Republic of Abkhazia, the Tbilisi-based stand in government for the territory, came in for particular criticism.

Lekso Gogokhia, 27, who lives in Gali, said that its officials appeared unconcerned about the fate of Georgians living in occupied Abkhazia. He said that government representatives had failed to even travel to the checkpoint to assess the problems there.

Davit Patsatsia, the minister of civil integration with the Tbilisi-based government, said that while the situation was deeply unfair to people living in Gali, his administration was doing all they could to help.

He said that when the bridge was opened for two days, about 1,000 people crossed and received services such as free healthcare.

Suggestions that they were deliberately keeping the bridge closed were a “direct provocation,” he continued, adding, “Our government is doing everything possible not to restrict the movement of Georgians living in the occupied territories. I am so sorry for what happened a few days ago. A man tried to cross the river secretly and he drowned.

“It is a tragedy that has once again shown the gravity of the process, which is called occupation,” Patsatsia said.

Coronavirus Pandemic, Giving Voice, Driving Change - from the Borderland to the Steppes
Georgia, Abkhazia
Coronavirus, Life
Connect with us