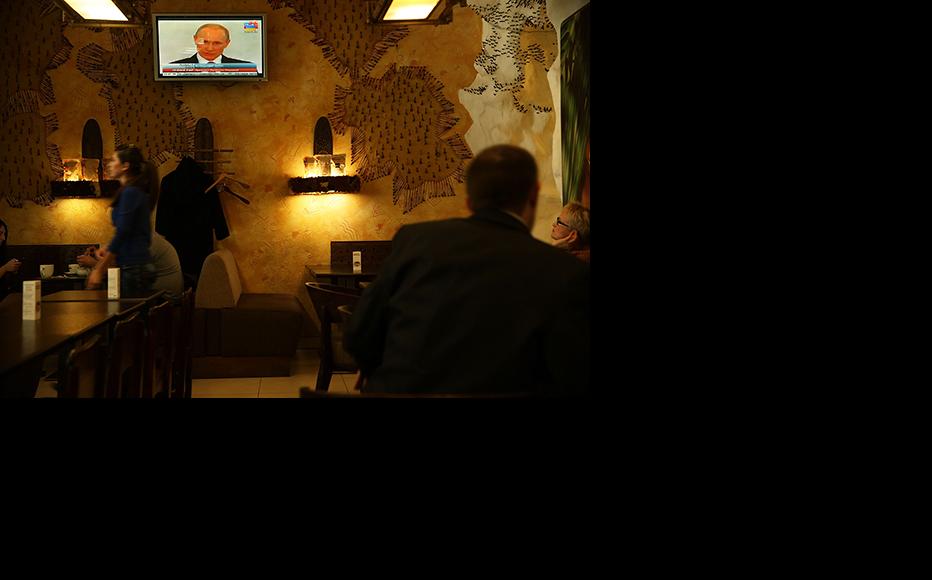 Russian President Vladimir Putin is viewed on a television screen in a cafe in Simferopol, Ukraine. (Photo: Spencer Platt/Getty Images)
The link has been copied

Experts have highlighted the importance of a nationwide media literacy campaign in Ukraine after new research showed that the public continue to be highly vulnerable to misinformation.

The survey, by Internews and USAID, revealed that although Ukrainians say that they have little trust in Russian media - one of the main sources of disinformation – their ability to identify fake news remained poor.

According to the research, 65 per cent of Ukrainians said they were able to distinguish fake news from real. However, when tested on three real examples, only 11 per cent of these people identified all the fake news stories accurately.

The research summary noted that while 28 per cent of consumers looked critically at the origin of their news “the part of audience which defines the certainty of news relying on their intuition or sympathy is still significant [at] 26 per cent”.

Svitlana Ostapa, the deputy editor of Detector Media website and head of the supervisory board of public broadcaster Suspilne TV, said the task of combating fake news felt like “mission impossible”.

“The amount of information which people use every day became so huge that it’s unthinkable for people to be able to check it.”

Significant responsibility also lay with the media, she continued, adding,

“Journalists should produce quality material and check the information, so the people know that their media is trustworthy.”

One classic example of the latter was the so-called crucified boy story reported by Russia’s Channel One TV, in which a woman from Slavyansk, eastern Ukraine, told reporters that she had witnessed how the wife and small son of a separatist fighter had been brutally and publicly executed.

Although the story was completely untrue, it was spread by numerous TV channels, websites and social networks.

Eugene Fedchenko is head of the Mohyla Journalism School and the co-founder of Stopfake, created in 2014 to combat misinformation and specifically Russian propaganda.

He explained that fake news was often far more compelling and emotional than accurate reporting.

“Quality journalism will always lose this fight, because it appeals to facts and arguments, and fake news appeal to feelings and emotions which are much closer to human nature,” Fedchenko said.

Olha Gerasymyuk, the deputy head of the national TV and radio council, said that the problem of fake news was a global one. A committee of digital experts had recently finished a two-year project for the Council of Europe, producing recommendations that included rules of delivery for quality information, as well as preventive mechanisms for partial information, propaganda and manipulations.

Gerasymyuk noted that the only country that did not support this document was Russia.

Fedchenko said that the ban on multiple Russian TV channels had helped decrease the amount of disinformation.

“These 82 channels covered different audience needs - information, entertainment etc - and were effective for propaganda,” he continued. “Now they are banned in Ukraine, which is good. We still have three channels owned by [pro-Russian politician] Viktor Medvedchuk but they only cover information needs. I do not know anyone who would watch an information TV channel the whole day, so it is less effective for propaganda.”

However Inna Kuznetsova, who heads the Kyiv bureau of Radio Liberty, said that fake news was growing ever more sophisticated and proliferated on digital platforms and social media.

“The ban will not help,” she said, noting that some video bloggers used their huge audiences on YouTube to spread misinformation. “Maybe one could create some media campaign with high-profile figures people in contrast to those who generate fakes.”

Fedchenko argued that the best ways to combat the phenomenon of fake news was to produce quality media content instead. There also needed to be efforts to actively disprove disinformation, increase media literacy and minimise the penetration of favoured platforms such as Russian TV channels.

Ostapa said that the older generation was particularly vulnerable.

“If you remember the USSR - people trusted everything published in Pravda [the truth] newspaper or broadcast by central television, and nowadays they still do. A media literacy campaign will not teach this wider audience.”

That meant media literacy needed to be integrated into mainstream education to change the dynamic for future generations.

“We have to tell them that they should not believe everything on the TV,” she continued. “As they like YouTube, media literacy knowledge should be digitalised and shown via their favourite networks.”

Kuznetsova agreed, adding, “We have to work with schoolchildren, and they may pass it on to their parents.”

Giving Voice, Driving Change - from the Borderland to the Steppes
Ukraine
Journalism, Media
Connect with us