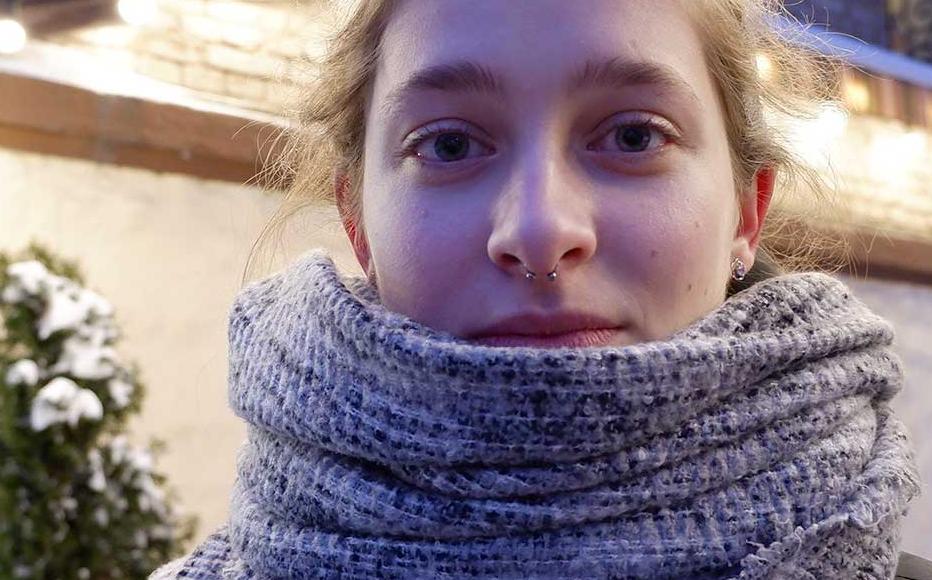 Lena was arrested on August 8, 2020 in Minsk, as she was preparing to serve as an independent observer for the following day’s presidential elections.
The link has been copied

Lena weeps as she recalls her summary arrest on the morning of August 8, 2020 in Minsk, as she arrived to prepare to serve as an independent observer for the following day’s presidential elections.

Three days later, the university student was serving a sentence in a horrifically crowded detention centre, where she describes corridors splashed with blood and urine and hearing “inhuman” screams from other detainees.

Lena, who asked for her surname not to be used, is now living in exile in Kiev, but has not given up hope that the uprising against President Alexander Lukashenko will be successful.

“I continue to fight,” she said.

Many young women have been at the forefront of the student-led protests that followed last August’s disputed presidential elections in Belarus.

Hundreds of students were detained during the protests, with many expelled from their universities and dozens of criminal cases opened. Others have since fled Belarus in fear of prosecution.

Nastya Petrovich, 20, was a fourth-year student at the Belarusian State Economic University when the protests began. She created the Strike Committee Telegram channel at her university, which soon grew to become a popular means of organisation and communication.

“I just knew that I had to do something, otherwise it would have been impossible to fight against all the chaos,” she said. “I could not just go to school on the first of September as if nothing had happened.”

Indeed, that day saw another march, when about 500 university students gathered in Minsk to protest the rigged elections.

“The students were detained at our university by men in civilian clothes, they were literary abducted from the gates of our university and the management did nothing about it,” Petrovich said.

On October 20, she was arrested on the street by officers from the department of financial investigations (DFI) who handed her over to the security services.

“They already knew that I was the administrator of the student channel,” Petrovich continued. “They took my phone, unlocked it with my fingerprint and mirrored my Telegram channel on their smartphone. One man, named Yuri, offered me the chance to cooperate; he asked me to write my ‘codename’ on a piece of paper. They threatened me and I told them to call me Tatiana. They let me go, but said that if the Telegram channel disappeared or I sanitised my chats, they would immediately find me and put me in jail for a long time.”

This was just the first of several so-called “conversations” the security services summoned her to.  Later, she learned that another administrator of the Telegram channel, Maxim, was also detained by the DFI and kept overnight.

Then, on November 12, ten students - including six women - and one lecturer were arrested by security services in Minsk under Section 1 of the Article 342 of the Criminal Code for "organising or preparing activities that gravely breach public order”. They faced up to three years in prison.

Petrovich said that she and Maxim felt the situation was now too perilous for them to stay in Belarus.

“I left right on that day,” she continued. “I crossed the border by bus, they kept us at the border for five hours, but then released us.”

Now in Poland, she is applying to finish her university studies there and says that she can only return home if the protest movement is triumphant.

Lena said that she had also felt that it was too dangerous to stay in Belarus after she was released early from her detention, having been warned that she would be thrown back into prison for the slightest misdemeanour.

She said that she had been originally arrested on trumped up charges of “petty hooliganism and violation of public order”.  In Belarus, independent observers are often detained in order to keep them away from polling stations.

“The chair of the neighbouring precinct wrote a complaint against me, that I was breaking into school, pushing her and shouting at her, which was not true,” she recalled. After an online Skype hearing on August 10, she was sentenced to 12 days in prison “for nothing”.

“My parents had been looking for me since August 8, no one informed them,” Lena continued.

She was transferred to the Okrestino detention centre the day after the trial.

“I was taken to a four-bed cell, in which 36 people were kept. It was so hot that some of the girls fainted. Girls were sitting everywhere: on beds, under beds, on a table, under a table, on bedside tables and inside them. One girl, who was Russian, was beaten with her head against the wall. People were brought into the cells all night and you could hear inhuman screams.”

The next day, she was taken to an unit in the city of Zhodino with other detainees., before being released on August 14 with a warning that she was being watched.

Both Petrovich and Lena are angry over the apparent compliance and even collusion of the university staff and some students.

Petrovich and her friends are collecting evidence of potential misconduct by the university authorities, with the hope of eventually holding them responsible for ill-treating students and depriving them of the opportunity to study.

In December, she published a document on her channel alleging that the deputy rector of her university had reported student protestors to the authorities.

“The deputy rector asked the police officers to enact administrative measures against the students, gave them their names and attached footage as evidence, which he himself filmed. The information was leaked by a university employee who disagrees with the administration,” she said.
Lena is also angry with her university administration and the lack of solidarity some other students showed with the struggle.

“My classmates knew what happened to me, they saw how the administration called security forces, but they did not do anything. They worried about their studies,” she said, adding, “I dream that in future, the photos of the strike committee members and oppressed students will be hung on the walls of our university with the caption, ‘they fought for your future.’”