“The agreement is very dangerous for peaceful, non-violent citizens who are escaping torture.” 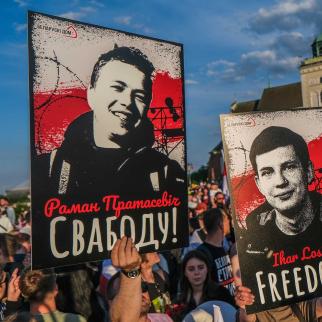 Belarusian dissidents in Poland call for international support against Belarusian President Alexander Lukashenko after authorities forced a plane to divert to Minsk to allow the detention of a prominent opposition activist. © Omar Marques/Getty Images

“The agreement is very dangerous for peaceful, non-violent citizens who are escaping torture.” 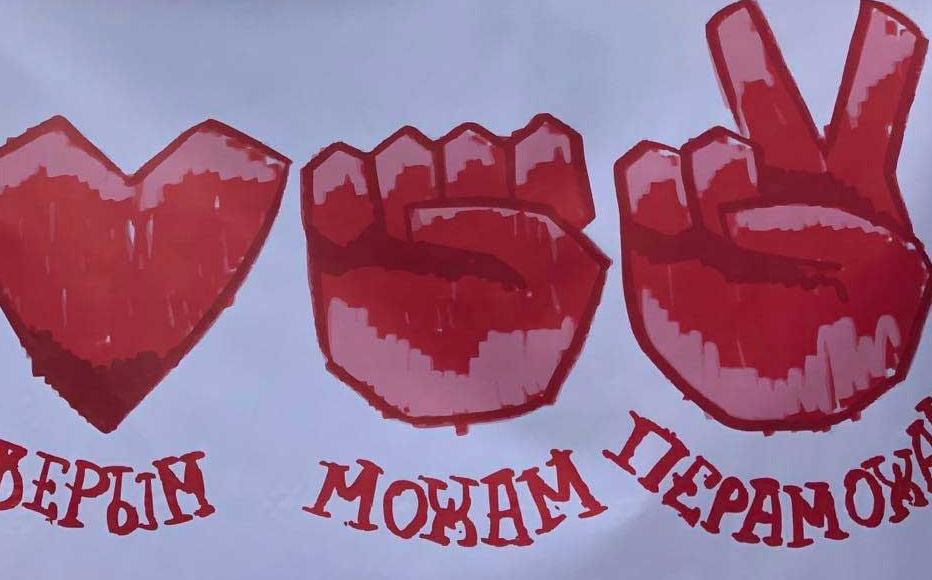 A sign from a Belarusian pro-democracy rally from last year in Tbilisi. © Anastasia Mgaloblishvili
The link has been copied

Georgia’s Belarusian exile community fears that a new security agreement between Tbilisi and Minsk may put them in grave danger, amid concerns that closer ties to President Alexander Lukashenko’s regime may also mark further democratic backsliding for Georgia.

Under the agreement, which was signed in 2016 but only came into force on August 16 this year, the two governments will exchange regular security information and cooperate on “fighting crime against constitutional order, sovereignty and territorial integrity, transnational organised crime, terrorism, cyber terrorism, and illegal circulation of weapons”.

The agreement also allows for security representatives to be sent to the territory of another signatory state.

Amnesty International warned that the agreement should not be used to “crack down on freedom of expression and the right to privacy,” while Human Rights House Tbilisi called for the Georgian side to “not allow the actual implementation of the agreement between the security services”.

Human Rights House Tbilisi also emphasised that Georgia remained one of the few countries that had not imposed a travel ban on Belarus, meaning it remained a highly valuable destination for Belarusians fleeing repression following the uprising that began in August 2020.

This diaspora in Georgia has played an active role in holding rallies and campaigning in support of pro-democracy activists back home. Many now fear that they are no longer safe from the threats they initially fled from.

Belarusian opposition leader Andrei Sannikov said that the timing of the agreement’s entry into force was particularly concerning.

“The agreement was signed in 2016 – at the time when the EU had very much softened its position on Lukashenka, which was unjustified, but the signing of the agreement at the time could be explained by the general policy of the EU at the time,” he said. “But the entry into force was, in my view, done on purpose at this time. It was not only an entry into force of a quite dangerous agreement, but it was an indirect way to legitimise Lukashenko – who is now being called the criminal and who has committed crimes against humanity.

“It is no coincidence that the Georgian government made a decision at this time. As a government, they could have waited longer. I am sure there is no pressing circumstances for such kind of an agreement.”

Georgia’ state security service announced that it had been Belarus that took the final steps to bring the agreement into force a month ago. However, the agreement mandates that it can only go live after the official exchange of diplomatic notes between the two parties and thus could not have gone ahead without a green light from the Georgian side.

The move comes amid increased concern among civil society about the Georgian government’s democratic backsliding and detachment from its Western commitments.

Concerns were further heightened by the events on July 5, when the authorities allegedly did little to retrain a far-right mob from attacking Tbilisi Pride. Amid the violence, more than 50 journalists were attacked and one subsequently died.

Sannikov said the danger of this security agreement must have been perfectly clear to Tbilisi.

“I don’t think that the Georgia government isn’t aware that in Belarus, Lukashenko decides who is criminal and who is not,” he said. “The agreement refers to cooperation on ‘extremism and terrorism,’ but today independent press is ‘extremist’ in Belarus… The agreement is very dangerous for peaceful, non-violent citizens of Belarus who are escaping torture.”

One young Belarusian woman living in Georgia, who asked to remain anonymous, said that she feared for her future if she was sent back to Belarus.

“I took part in all the protests in Belarus and was also a member of one of the opposition parties,” she said. “I also observed the elections. Because of my activities, the situation in Belarus was no longer safe anymore, and I came to Georgia.”

She made the move with the help of a Georgian NGO, which also supported her in finding a residence permit and a place to live.

“I feel much better here. I feel safer,” the woman continued. “I don’t think about policemen catching me on the streets and taking me to jail. But I am afraid to return to Belarus, and it is a bit stressful for me. I don’t know what fate awaits me there,” she says.

Another Belarusian living in Georgia, who also asked to remain anonymous, said that his fellow exiles had already changed their behaviour.

“After this agreement, we, the Belarusians in Georgia, began to act more cautiously, many switched to anonymous accounts,” he continued. “We also know that the Georgian government extradited political activists to Azerbaijan and Russia. Although we understand that the Georgian government is unlikely to extradite anyone given what it will cost it – like the anger of the EU - we do not rule out that they may try to extradite one of them unofficially.”

He said he was not encouraged by the announcement earlier this month that Belarus’ central administration for elections and referendum would be one of the international monitoring missions observing Georgia’s October 2 local elections.

This may mark a decisive moment, the Belarussian exile said, adding that he believed that “in the future, an attempt by the Georgian government to transition to an authoritarian regime with a bias towards cooperation with Russia is possible. Then nothing will be surprising”.