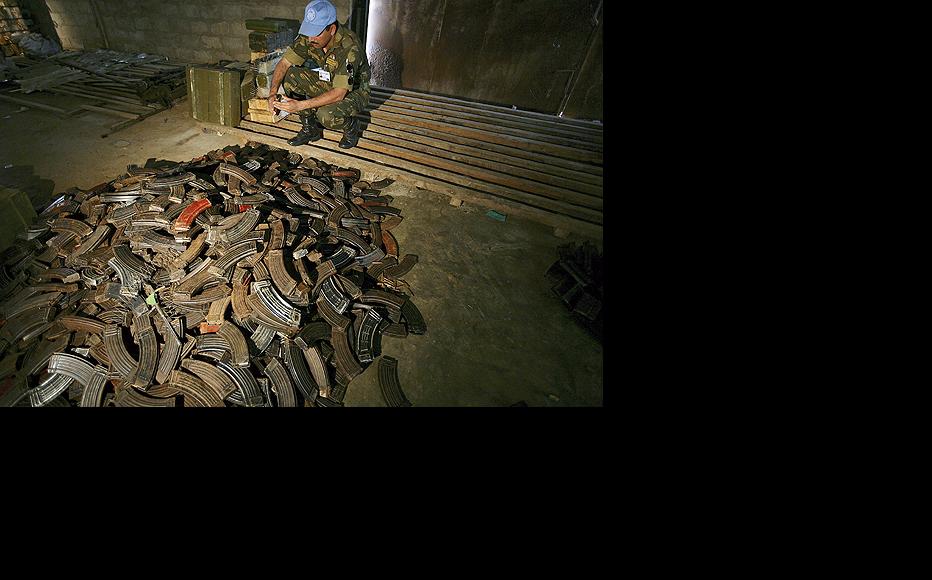 Militia weapons handed in to the UN as part of DRC demobilisation process. (Photo: UN Photo/Martine Perret)
The link has been copied

Human rights activists are divided over parliament’s recent rejection of a bill seeking to abolish the death penalty in the Democratic Republic of Congo, DRC.

The sentence remains on the DRC statute books, even though a moratorium means the last execution took place in January 2003. It is now automatically commuted to life imprisonment.

Normally, human rights defenders are the first to take a stand against the death penalty, but for many Congolese activists the standard abolitionist arguments do not hold up in the context of today's DRC, where violence and human rights violations remain endemic.

Some of the strongest Congolese advocates for the retention of the death penalty - most recently agreed by parliament last November when the abolitionist bill was dismissed - have come from civil society campaigners in eastern DRC.

They feel that, due to the number of killings still taking place there, and more specifically in the Kivus, it is not yet the right time to abolish state-sanctioned executions.

“We are for the abolition of the death penalty, only not now. We think it is not timely because of the nature of the crimes committed here,” Jean-Paul Lumbulumbu, a human rights defender from local pro-democracy organisation RACID, said.

Many argue that capital punishment is a legitimate deterrent that the state should use to prevent atrocities by militias and individuals. They contend that the prevalence of crime in certain areas calls for a strong response from the government and the judicial system.

In March 2009, Kyungu Mutanga Gédéon, a Mai-Mai militia leader, was sentenced to death in the province of Katanga in eastern DRC.

Although Human Rights Watch condemned the sentence at the time, local observers say that the judge’s decision sent a clear message to the leaders of armed groups in the area, which was, apparently, heeded.

At the core of the debate over capital punishment lies the role of the judiciary and its capacity to render justice fairly.

Bogged down by corruption and inefficiency, the judicial system has failed the Congolese population on many accounts.

Magistrates are often corrupt and criminals can bribe their way out of jail while poor people remain in overcrowded prisons for interminable periods, often for the smallest infractions.

Some say that, to an extent, it is this absence of the rule of law that has contributed to the current lack of stability in the country.

For Lumbulumbu, this is a further argument for retaining the death penalty.

“Prisons are overcrowded and sometimes you can see a criminal on the street days after he was sentenced to jail. How do you deal with that? Because they do not have faith in the judicial system, people resort to vigilante justice and kill criminals anyway. It is better if it is done by the law,” he said.

But abolitionists argue that the inherently corrupt nature of the judiciary is a reason to put an end to the death penalty.

“Who will be sentenced to death? The same people who languish in jail or the real criminals?” Regine Ndamwenge, a local journalist, asked. “Corruption does not know degrees.”

She added that if someone can get out of jail with a bribe, he will be able to get around the death sentence.

Others note that keeping capital punishment on the statute books could make it harder for the International Criminal Court, ICC, to work with the DRC on setting up local war crimes trials.

Uganda struggled to gain ICC acceptance for a new bill to establish a war crimes tribunal because of the government’s determination to retain the death penalty. After lengthy debate, the bill was finally passed last year, after mention of the death penalty was dropped from its final draft, although it is still retained under Ugandan law for certain crimes.

Miscarriages of justice are another argument used to advocate for an end to capital punishment.

With a system far from perfect and a police force ill-equipped to investigate crimes, innocent people can be condemned easily and magistrates influenced to give unfair sentences.

The last execution in the DRC took place in January 2003, when 15 individuals were shot by firing squad. Following this execution, the human rights group Amnesty International raised questions about the safety of the convictions.

In particular, campaigners highlighted concerns that the condemned were not given the right to appeal their sentence, which was handed down by a military court.

“The law on the death penalty dates back to colonial times,” Samy Mukembozi, a lawyer and member of human rights NGO UCPDHO, said. “It was based on Talion law; in other words, an eye for an eye and a tooth for a tooth. It is problematic today.”

Contrary to the arguments of some other rights campaigners, he says that retaining the death penalty is not the best way to develop Congolese law and order.

“The purpose of punishment is not simply to sanction but also to reform the person that violated the law,” he said. “In that sense the death penalty fails one of its purposes, since you cannot reform someone who is dead.”

Maitre Kalinda, a provincial legislator from North Kivu, is disappointed that the decision was made to retain capital punishment, since he thought the moratorium was the first step towards its abolition.

But he hopes that there might be another chance to scrap the sentence after the election later this year.

“The current parliament’s mandate is coming to an end in 2011,” he said. “We will carry on pleading for the abolition [of the death penalty] and a new parliament will mean a new possibility.”

Melanie Gouby is an IWPR journalist. Passy Mubalama is an IWPR trainee.

Democratic Republic of Congo
Rule of Law
Connect with us