Goran Hadzic “would usually either deny knowing anything about them, or claim that these crimes were committed by individuals who were out of effective control”.

Goran Hadzic “would usually either deny knowing anything about them, or claim that these crimes were committed by individuals who were out of effective control”. 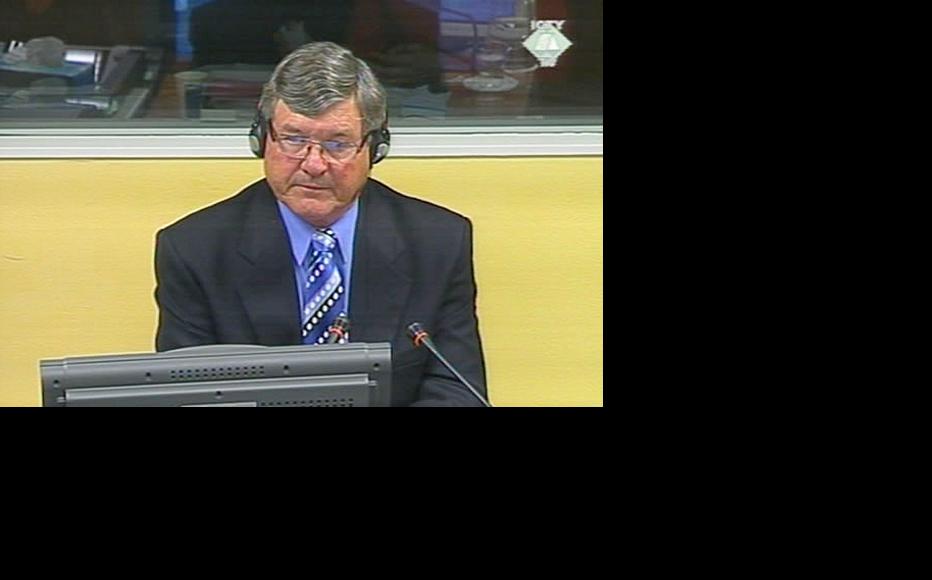 Prosecution witness, General John Wilson in the ICTY courtroom. (Photo: ICTY)
The link has been copied

During the war in Croatia, local Serb leader Goran Hadzic would typically deny crimes or claim they were committed by forces not under his control, a former United Nations military observer told the Hague tribunal this week.

The prosecution witness, General John Wilson, was a senior UN military liaison officer in the former Yugoslavia from January to March 1992 and chief military observer from March 1992 to December 1992.

At the outset of his testimony, Wilson told the chamber that he was required to attend a number of meetings with the political and military leadership of “all the involved parties.” That included Hadzic, who was president of the Serb breakaway region in Croatia known as the Republic of Serb Krajina, or RSK.

“I remembered Hadzic reacting to reports of crimes in different ways,” Wilson said, “but I also remember that he would usually either deny knowing anything about them, or claim that these crimes were committed by individuals who were out of effective control.”

Hadzic is charged with 14 counts of war crimes and crimes against humanity committed against Croats and other non-Serbs during the war in Croatia in the early 1990s, including persecution, extermination, murder, imprisonment, torture, inhumane acts, cruel treatment, deportation, wanton destruction and plunder. He is alleged to have been part of a “joint criminal enterprise” with other political and military officials, whose purpose was the “permanent forcible removal of a majority of the Croat and other non-Serb population from approximately one-third of the territory of the Republic of Croatia” in order to create a Serb-dominated state.

During the conflict, Hadzic held senior political positions in Serb-held parts of Croatia. He was head of the government of the self-declared Serbian Autonomous District of Slavonia, Baranja and Western Srem, known as SAO SBWS; and was president of RSK – which absorbed the autonomous district – from February 1992 to December 1993.

Wilson said that in his opinion, the defendant had effective authority in Krajina. The police, for example, were formally under the jurisdiction of RSK interior minister Milan Martic, but were “effectively” working for Hadjic, the witness said.

Wilson added that Hadzic “gave the impression” of being completely loyal to then Serbian president Slobodan Milosevic. The witness said that both Milosevic and Hadzic argued that any “activity of forces on the ground” was often a response to “Croatian provocations”.

The witness said that Hadzic seemed to support the idea that areas under RSK control could never rejoin Croatia, and that there was “no chance” that Croats and Serbs could live together. But he added that Hadzic was not an “active proponent of clearing the RSK of its non-Serb inhabitants by force”.

These special police forces were a source of “problems for the deployment of [UN peacekeeping forces] on the ground in Krajina”, Wilson continued.

In the course of his testimony, Wilson also noted that the UN’s position in RSK-controlled territory was dependent on the local authorities and on their will.

During cross-examination, Hadzic’s defence lawyer Christopher Gosnell reminded the witness that in his own reports to Lord David Owen – the author of the peace plan which provided for the demilitarisation of local Serb forces – he suggested that there was a role for local authorities and that they should remain until the UN peacekeeping forces known as UNPROFOR were fully deployed, and possibly even afterwards.

The witness confirmed that he had felt there were “legitimate military reasons for the Serbs to keep their own forces once UNPROFOR was deployed”.

However, he pointed out that part of the reason why UNPROFOR was so challenged on the ground was that local authorities in RSK did nothing to support the peacekeepers or to ease tensions.

“UNPROFOR quite obviously wasn’t able to help the local population. The situation was unsafe and the atmosphere was one of fear, and there was no effort by the local police to stop or prevent this,” Wilson said.

[Correction: the original version of this story wrongly identified the defendant's counsel here as Toma Fila, when it was Christopher Gosnell. We apologise for the error.]