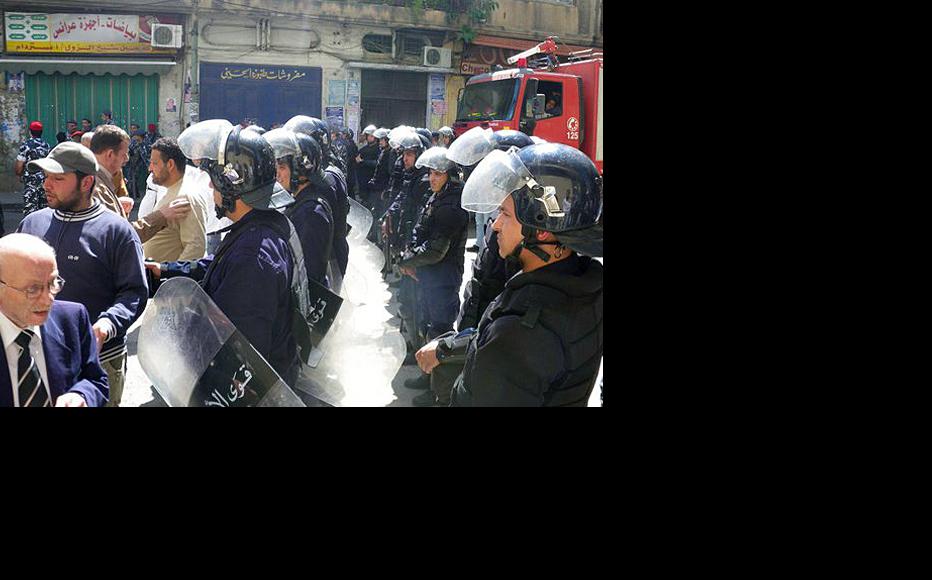 Anti-Syrian demonstration in Tripoli, Lebanon. (Photo: Salam Hafez)
The link has been copied

The political movement representing protesters in Syria has called on the Lebanese government and political parties to stop supporting President Bashar al-Assad’s regime and instead back the protest movement that has swept the country.

In an interview with IWPR, Nidal Darweesh from the political office of the Syrian Revolution General Commission, also urged the Arab League to fully recognise the opposition and freeze Syria's membership of the bloc immediately.

"The people of Lebanon have done their duty by sheltering civilians and defecting soldiers fleeing the violence perpetrated by the regime. But for the government to hand over injured people and activists is a violation of international laws covering refugees," Darweesh, a former political prisoner in Syria, said.

"The Lebanese government has not abided by international humanitarian law. Instead of assisting civilians and defecting soldiers, it arrests them and sends them back to a certain death. That is appalling.”

Darweesh’s comments came after the March 14 alliance, a coalition of Lebanese political parties in opposition, and the Lebanese Institute for Human Rights, LIHR, accused the government in Beirut of "providing security services" to the Syrian regime.

They alleged that Lebanon had detained and handed back defecting Syrian soldiers, allowed Syrian troops to enter the country to conduct military operations, facilitated the kidnapping and return of at least 12 activists in cases documented by the LIHR, and allowed the Assad regime to plant landmines on illegal border crossings between the countries.

Parliamentarians from Lebanon’s governing March 8 bloc, which includes Hezbollah, refuse even to acknowledge the existence of a wide-scale protest movement in Syria, talking instead of "disturbances" caused by armed Islamists, and a United States conspiracy to oust Assad.

They have repeatedly denied supporting the Syrian regime, while openly backing its attempts to regain control and survive the unrest.

In early October, however, General Ashraf Rifi, the head of Lebanon’s police agency, the Internal Security Forces, told the parliamentary committee for human rights that members of his force assigned to protect Damascus’s embassy in Beirut had kidnapped four Syrian nationals in March. He said the case had been referred to the military judiciary for investigation, and announced an investigation into the incidents.

The March 14 bloc also condemned the security forces' ban on media entering Wadi Khaled in northern Lebanon, where many Syrian refugees are staying. It said it was asking the cabinet to annul this decision, and would get round the ban by “communicating directly with people there”.

He called on the Syrian government to "put an immediate end to all such incursions and respect Lebanon's sovereignty and territorial integrity".

Darweesh said, "We hope the Lebanese government and [pro-Syrian] groups will place their bets on the success of Syria’s people, who are not going to stop their uprising, and not on the regime. It will be our country in future, and they [Lebanon] will have to deal with is."

He said he believed decisive action by the Arab League could lead to a swift international response to protect civilians, and warned that the situation would become increasingly violent if the regional grouping failed to back the protestors.

The Arab League is due to hold a meeting on November 12, following the Assad regime’s failure to adhere to a plan that should have seen an end to violence against civilians, the withdrawal of troops from major towns, and the release of all political prisoners. Since then, hundreds more civilians have been killed, mainly in Homs.

Darweesh denied the existence of autonomous armed groups not associated with the Free Syrian Army – a rebel force drawn from defecting soldiers – which have reportedly been attacking government forces and civilians loyal to the regime.

"There’s been no decision to make this revolution violent, although there have been individual cases of armed self-defence, which is completely understandable," he said. "The regime is trying as hard as it can to turn this into an armed uprising, but it is a peaceful political movement.

"The Syrian security forces are killing whole families. People have a right to defend themselves against what now have become regime gangs out to kill."

A spokesman for the Free Syrian Army said part of the reason the rebel force existed was to prevent the civilian population taking up arms en masse.

He said the group was turning away many of those who wanted to join it because for the moment, "the Free Syrian Army operates better strategically with fewer numbers... it’s able to mount strikes and disappear with little or no casualties in our ranks".

The Arab Spring
Syria, Lebanon
Media
Connect with us