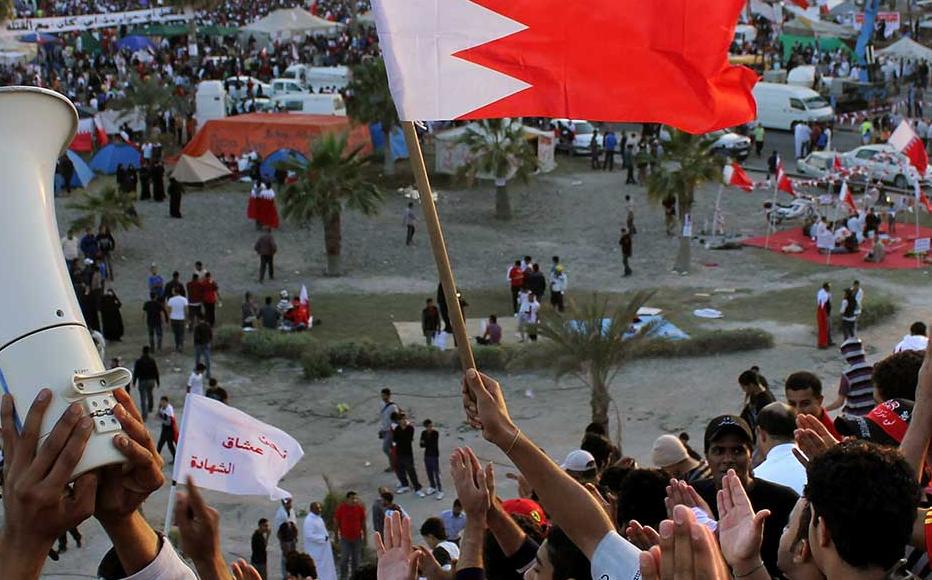 Our geo-political importance left us side-lined; but this is a long-term struggle.

Anti-government protesters wave flags and demonstrate at Pearl Roundabout on February 20, 2011 in Manama, Bahrain. © John Moore/Getty Images
The link has been copied I remember the exact day something began to change in Bahrain. It was August 13, 2020 and a group of activists had returned from London where they had been speaking at the House of Lords about torture in Bahraini prisons. They were arrested as soon as they arrived in Muharraq airport.

Until then, the prime minister together with the King and Crown Prince had played a game of good cop, bad cop. Opposition figures would be arrested, then the King would grant them amnesty on a special occasion such as Eid, and all would go back to pseudo-normal for a while.

Eid was coming up, and the expectation was that they would be released as usual. Instead, the King and Crown Prince doubled down. Something really shifted. There were many more arrests and cases of human rights violations, including of children.

Bahrain has one of the oldest civil rights movements in the region. Almost half the population of Bahraini citizens took part in the protests, per capita the largest in the Arab Spring.

In early 2011, the protests began at Pearl Roundabout with two aims. Firstly, to release these detainees, and secondly for the king to fulfil his 2001 promise for the return of the 1973 constitution. The demands did not change to include the removal of the regime until people started getting killed.

One tent at the roundabout became a place for people to give testimony about their torture in prison. This was horrific physical, sexual and psychological torture. A number of international journalists were there and I also acted as a translator. I personally took the testimony of Sami Mushaima, who was later executed [in 2017]. I remember how horrific his torture had been. At one point they brought his brother into the room, stripped him naked and threatened to rape him unless he signed a confession. Sami signed.

I also spent 2011 trying to explain to Western journalists that sectarianism was a far too simplistic way of looking at our situation. But their editors always wanted to run with the much sexier angle of sectarianism.  The international media definitely fed that narrative of sectarianism.

It was the regime that successfully institutionalised a sectarian system, systematically marginalising the Shia majority. This had a very serious effect once the revolution started. It became a self-fulfilling prophecy. Sometimes we make mistakes and fall into the discourse others create, too. We are left trying to prove to people that we are not Iranian agents or fifth columnists.

But the uprising didn’t begin at Pearl Roundabout. Bahrain has one of the oldest civil rights movements in the region. Almost half the population of Bahraini citizens took part in the protests, per capita the largest in the Arab Spring, or as I like to call it, the Revolution of Dignities. The Arab Spring was a Western-imposed term that seemed to simplify our expectations, as if we thought that in one season we would bring democracy and everything would be great. This was never about a spring, it was about a long term struggle. What also irks me is that Arab Spring is an exclusionary term. There were so many other ethnic groups, like Nubians, like Kurds, who also paid a high price.

Reform now depends on the wider political situation, as Bahrain has geo-political importance to some of the most powerful countries in the world.  After Donald Trump was elected, he met the King and announced that they were going to be better allies. Almost immediately, a crackdown began. Protesters were killed, and the last semi-independent media outlet was shut down, along with all opposition parties. There was definitely a connection.

Trump’s other great achievement, normalisation with Israel, was all about the regime telling the local population, who were not supportive – you don’t have a say. For us, the immediate effect of normalisation is going to mean that surveillance gets worse, using Israeli technology.

Now under Biden things may change, although our experience shows that there is not much difference between the Democrat and Republican approach and policy on the Gulf beyond some minor details.

I’ve learnt over the last ten years that discourse really matters, especially on social media. One of the most powerful things activists can do is shift the discourse of ‘look what these protests ended up achieving, look at the end results in Egypt, look at the civil war in Egypt, look at the chaos in Libya’.  But it wasn’t the protests that caused this. It was the regimes. This will matter more and more in the future when people look back on the history of this period. We need to focus on what regimes did because they were so scared of the power of protest.

Our resources are tiny compared to the overwhelming power of the regimes. It’s a slow process, but we can’t do these things without hope. I’ve learned to be very cautious in my hope; its constant crushing is exhausting. I remember often what my father told me before I left Bahrain. He said, “Don’t be a human rights defender because you expect results. If you do, you will be disappointed. Be a human rights defender because it’s the right thing to do.”

He also used to say that “the revolution of hungry is not the revolution of the activist”. In 2011, civil society fuelled the uprising. Now, we are experiencing an economic crunch, as well as looming, potentially catastrophic, climate change. My worry is that because of the international response, or lack of it, the dynamic has been created where people believe peaceful revolution does not work. The irony is that the next revolutions are going to be extremely violent as a result.

Maryam Al-Khawaja is a Bahraini and international advocate on human rights issues as well as a consultant and trainer. Her father, Abdulhadi Al-Khawaja, is serving a life sentence in Bahrain for his human rights work.