The country’s most famous prisoner of conscience has been freed, but activists continue to be detained.

The country’s most famous prisoner of conscience has been freed, but activists continue to be detained. 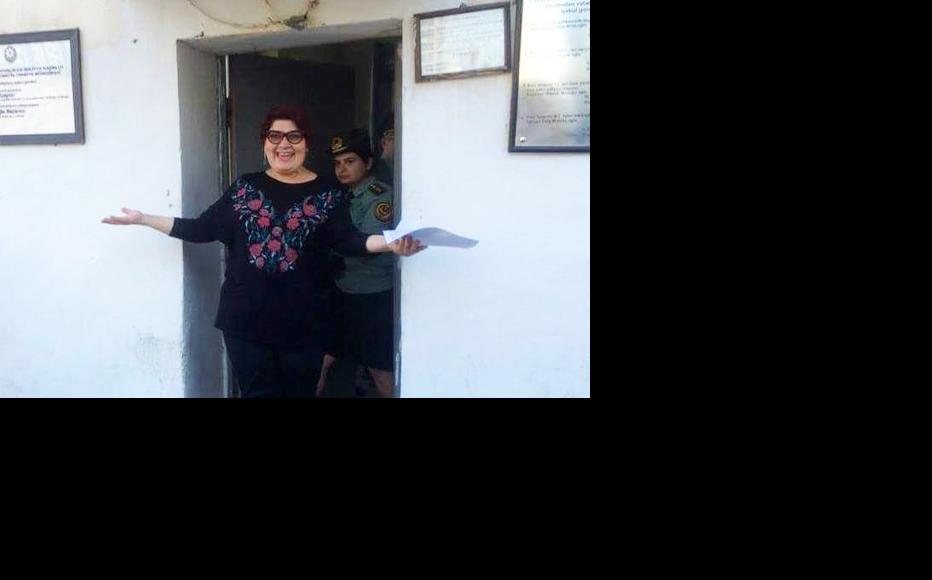 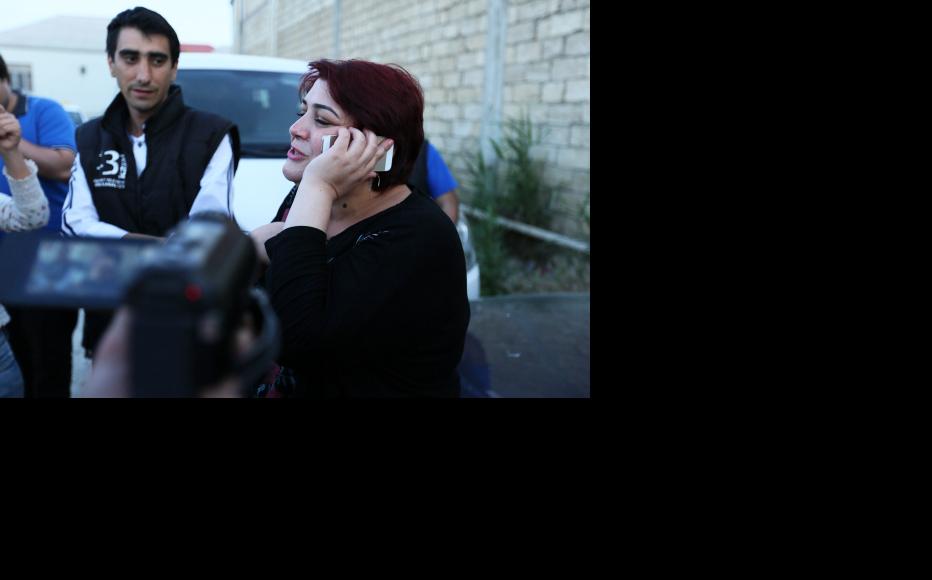 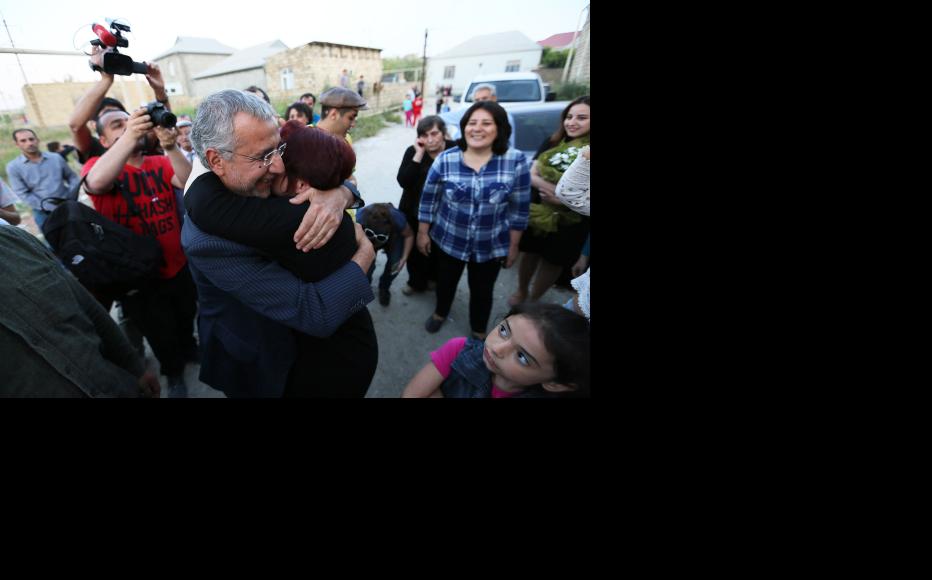 Ismayilova embraces Intigam Aliyev, a human rights lawyer and former prisoner of conscience, who was released from prison on March 28. (Photo: Aziz Karimov) 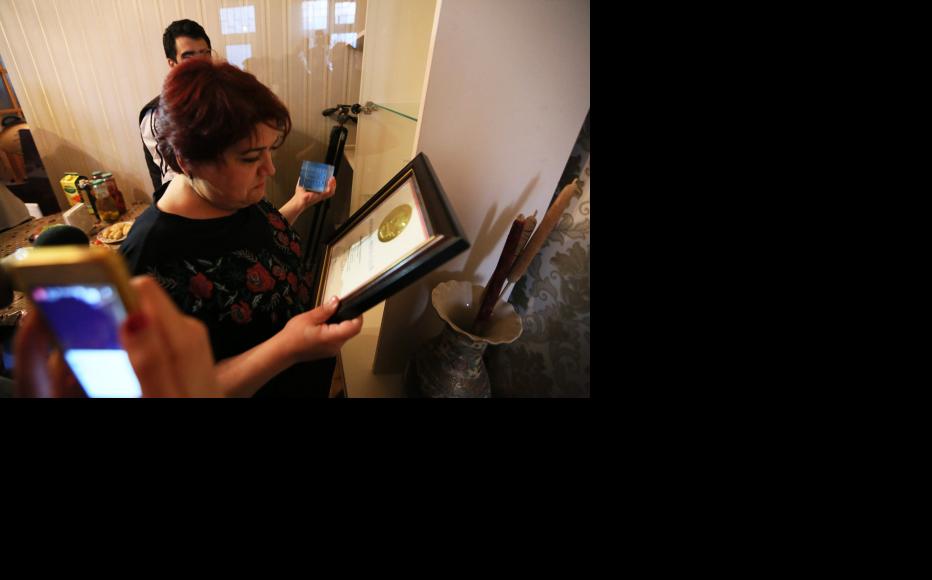 Ismayilova looks at the award of the UNESCO/Guillermo Cano World Press Freedom Prize 2016, which her mother received on her behalf while she was in prison. (Photo: Aziz Karimov) 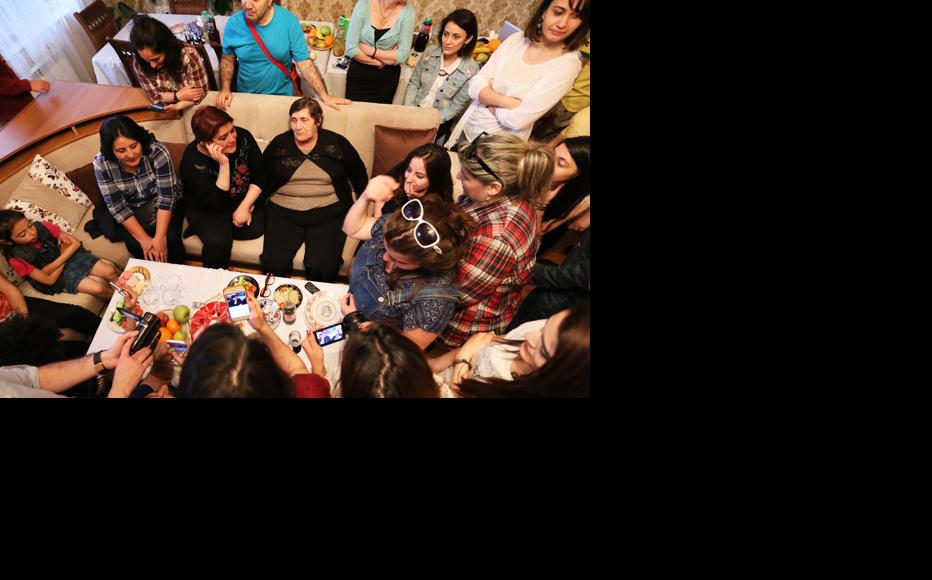 Ismayilova at home with her mother Elmira, family and friends. (Photo: Aziz Karimov)
The link has been copied

The surprise release of Azerbaijan´s award-winning journalist Khadija Ismayilova has been attributed to effective international pressure on an economically vulnerable Baku.

But experts, including Ismayilova herself, agree this does not signal that Azerbaijan´s authoritarian regime is softening its harsh policies.

Ismayilova told IWPR that the Azerbaijani government, with its funds running low amid falling oil prices, had had little choice but to make concessions.

Pressure had been stepped up through factors such as the US approval of the Global Magnitsky Act on May 18, which means human rights abusers worldwide risk sanctions. European legal action over her case and upcoming international sports events in Azerbaijan had also served to place added scrutiny on the country´s President Ilham Aliyev.

“On the one hand, US Congress threatened [Baku] with Magnitsky and documents of the Panama Papers were published, which led to more pressure on the government of Azerbaijan,” she continued.  “On the other hand, a decision is expected from the European Court [on Ismayilova’s case].  A new wave of international pressure is expected on the eve of the Formula-1 competition [due to be held in Baku on June 17-19].

“If my business had been left until September, Ilham Aliyev could have expected to hear new accusations at the next meeting of the UN General Assembly,” Ismayilova said. “And most importantly, the government of Azerbaijan does not have a lot of money as before to mobilise all the lobby groups to avert all the waves of pressure.  When there is no money, you cannot pay off and silence [people] through bribes.”

Ismayilova was detained in December 2014 and sentenced to seven-and-a-half years in jail by a Baku court in September 2015 on trumped-up charges of embezzlement, illegal entrepreneurship, tax evasion and abuse of office.

This was widely seen as retaliation for her investigative reporting on Aliyev and his family’s alleged ties to corruption.

Azerbaijan´s Supreme Court has now reduced Ismayilova´s sentence to a suspended term of three-and-a-half years by reversing two of the original four charges against her.  The court left in force the sentence on charges of illegal entrepreneurship and tax evasion.

Reporters without Borders said this suspended sentence was as “a way of silencing those campaigning on her behalf without acknowledging her innocence”.

As soon as she left prison, Ismayilova made it clear that she would continue to fight to clear her name, as her conviction still stands.

Ismayilova was represented by the prominent barrister Amal Clooney of Doughty Street Chambers and Nani Jansen of the Media Legal Defence Initiative.

In March, Clooney and Jansen filed legal submissions to the European Court alleging violations of Ismayilova´s rights under the European Convention on Human Rights.

In a statement, her lawyers welcomed her release and called for Ismayilova to “be allowed to resume her work as a journalist without further harassment by the government”.

Ismayilova´s 40th birthday, which fell two days after her release, was marked by celebrations and demonstrations in various countries, at the initiative of the Sports for Rights coalition.

There were also calls for all political prisoners in Azerbaijan to be released.

Currently, there are an estimated 70 journalists, bloggers and activists being held in Azerbaijan´s jails.

One of them, Seymur Hazi, a reporter for the TV channel Azerbaijani Hour and a columnist for the Azadliq newspaper, has been internationally recognised as a prisoner of conscience.  rec

Hazi was arrested in August 2014 on trumped-up charges of disorderly conduct and sentenced to five years in jail in January 2015 for aggravated hooliganism.  He ently received the 2016 Free Media Award by the Bucerius Foundation in Hamburg and the Fritt Ord Foundation in Oslo.

Ismayilova was one of a number of political prisoners released so far this year.

In March, Azerbaijan freed over a dozen detainees ahead of Aliyev’s trip to a summit in the US.

Later that month, the Supreme Court of Azerbaijan ordered the release of the prominent human rights defender Intigam Aliyev.  The court turned his seven-and-a-half year imprisonment into a five-year suspended sentence.

Samira Gasimli, a political analyst of the Republican Alternative (REAL) movement, emphasised that  the prisoner releases were the result of external pressure on the government against the backdrop of economic problems.

“US Congress demanded the immediate release of four political prisoners, threatening sanctions against the Azerbaijani government.  Three of them – Anar Mammadov, Intigam Aliyev and Khadija Ismayilova – are already free.  Out of these four, only the leader of REAL, Ilgar Mammadov, is left in custody,” she said.

Naila Yagublu, who chairs the women´s organisation of the opposition Musavat party, also said that Baku’s parlous economic situation made it vulnerable to such pressure.

“The government has repeatedly appealed to the International Monetary Fund and the World Bank asking for a loan,” she said.

“The threats of [US Senator John] McCain regarding the Magnitsky [Act] was also a serious cause for softening the authorities.  But I think, if the Azerbaijani authorities had a lot of money as before, they would have easily ignored this threat,” Yagublu told IWPR.

The editor of the opposition Azadliq newspaper, Rahim Hajiyev, stressed that the prisoner releases were not a sign of moderation.

“Even though Intigam Aliyev and Khadija Ismayilova were released, their convictions still stand.  The authorities would have shown real humanism, if they had released all the political prisoners at once,” he told IWPR.

On the day of Ismayilova’s release, journalist Elnur Mukhtar and youth activist Amid Suleymanov were arrested and detained for ten days.

Then on May 28, the head of the youth branch of the Sheki district organisation of the Popular Front Party of Azerbaijan was arrested and ordered held for 15 days on charges of petty hooliganism.  Samir Hasanov was taken into custody after a group of party activists visited the Alley of Martyrs on the occasion of Republic Day, which commemorates Azerbaijan´s first declaration of independence in 1918.

Gasimli said that, with the homegrown opposition weak, only sustained international action would have any impact on Baku.

“Unfortunately, the government is softening only because of external pressure.  It stopped feeling any internal pressure a long time ago.

“The government knows very well that the issue of political prisoners is the problem of a narrow circle of people.,” she continued. “The majority of society has not even heard of these people.  And there is only one explanation – the government has managed to create a model apathetic society, on which it has worked on for a long time.”