Azerbaijan Eases Rules – Only to Reimpose Them

Azerbaijan Eases Rules – Only to Reimpose Them 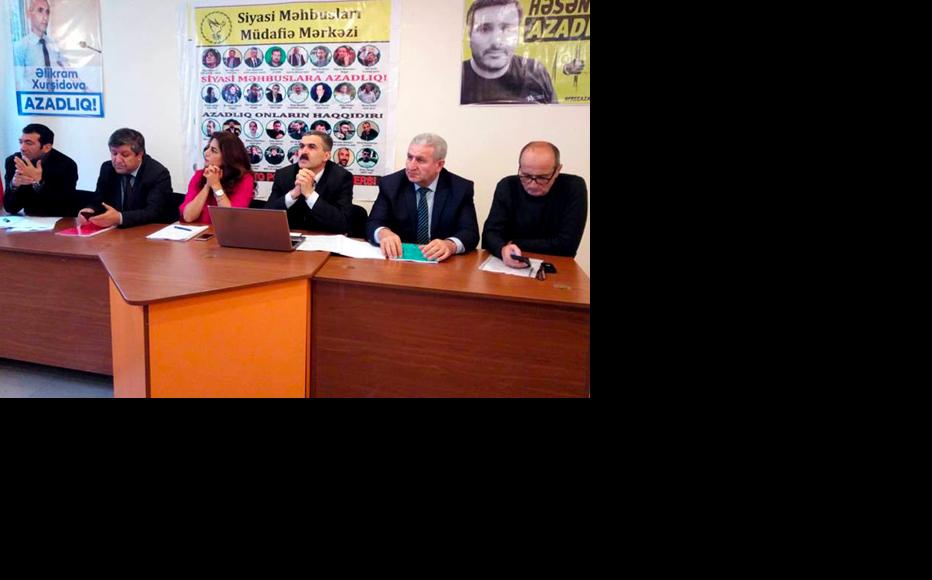 The Centre for Protection of Political Prisoners and the Coordination Centre for the Family of Convicts discuss the current crackdown. (Photo: Ogtay Gulaliyev)
The link has been copied

Baku’s recent apparent relaxation of its approach to dissent has only been temporary and cosmetic, according to local activists.

For a brief period in January, the authorities appeared to be softening their stance on protest. They took the rare move of sanctioning an official rally, held on January 19, in support of jailed blogger Mehman Huseynov and other political prisoners.

Then, two days later, new charges against Huseynov that would have extended his prison term were dropped. He will be released in early March as soon as he serves his current two-year sentence.

However, in the wake of the rally, hundreds of its attendees were telephoned by police. Journalist Ramin Deko, one of those contacted, said he believed that cellphone companies had provided the authorities with data on people whose phones were detected in the area.

“I got a call to a number that is known to a very small circle of people, and exactly on that day I communicated with my editor on this number,” he said.

Another journalist, Aytan Farhadova, told IWPR that her uncle - who had not attended the rally – was nonetheless phoned and questioned extensively about the event.

Civil society activist Sanubar Haydarova wrote on Facebook how “they keep calling my mum and asking about the rally ... Last time I talked to them myself, I told them that the rally was sanctioned and there was nothing wrong that we attended it. And if they had some specific questions, they could summon us to the police station”.

Another rally in support of political prisoners was planned for January 26, but this time the authorities refused to let it go ahead.

Human rights activist Samir Kazimli said that any optimism over the authorities’ apparent loosening of restrictions had been premature.

“It was not a softening of power, but just one small step back,” he said. “And it was done following pressure from the international community. We should not forget that in 2018 a new fraudulent criminal case was opened against four political prisoners, when there was just little time left until the end of their sentence. And only in one case - in the case of Mehman - the new criminal case was suspended. Others got new charges and sentences. What kind of softening is this?”

Meanwhile, activists continue to be arrested.

Turan Ibrahim, from the Azerbaijan Popular Front Party, told IWPR that 46 activists from various organisations had been arrested and jailed to 15-20 days in prison since January. More than 20 activists were also fined.

Mistreatment of detainees has also continued.

Giyas Ibrahimov and his friend Bayram Mammadov were arrested in May 2016 after they wrote “Happy Slaves’ Day” in Azeri on a monument to ex-president Heydar Aliyev. They were sentenced to ten years in prison on “drug trafficking” charges.

Ibrahimov’s mother Shura Amiraslanova, told IWPR that psychological pressure was put on her son after he and some other political prisoners went on hunger strike in support of Huseynov.

She said that his bed, personal belongings and even his pockets were frequently searched and that other prisoners were incited to provoke him so that guards could punish him.

“I spoke with Giyas on the phone on February 6. ... He said that he did not violate the internal regulations of the prison and did not create any problems. ‘And if, in spite of this, weapons, drugs, or something else were found under my mattress, it will be on the conscience of the prison authorities,’ Giyas told me,” she said.

Leyla Mustafayeva, the wife of imprisoned journalist and former IWPR contributor Afgan Mukhtarli, also claimed that her husband had been subjected to bullying.

Abducted in Tbilisi in May 2017, he was taken across the border to Azerbaijan and sentenced to six years in prison for smuggling, illegal border crossing and causing bodily harm. Amnesty International has declared him a prisoner of conscience.

“It was last week when we last talked on the phone,” Mustafayeva said. “He said that he was going through extreme psychological pressure. On his birthday, about 200 letters and greeting cards were sent to him. But prison authorities did not give him any. Friends fetched him books, but they didn’t give him the books either. Then, they told him mockingly, ‘Will you lose your crown if you don’t read?’

“Sometimes he is not allowed to make phone calls. They know that he is quick-tempered and provoke him into quarrels. He said that he could hardly contain himself,” Mustafayeva concluded.

Ogtay Gulaliyev, coordinator for the Center for Protection of Political Prisoners and himself a former detainee, told IWPR that torture was standard in detention facilities.

He noted the examples of Taleh Bagirzade, the leader of the Movement for Muslim Unity, and two fellow-members Abbas Huseyn and Jabbar Jabbarov, who he said had been subjected to physical and psychological torture in Gobustan prison.

“Taleh Bagirzade, who, despite multiple arrests has so far demonstrated extreme restraint, harmed himself in protest against the torture,” Gulaliyev said. “And as for Abbas Huseyn, he was beaten so violently that his clothes were torn to shreds.”

The three men were detained during a raid in Nardaran in November 2015 and sentenced to 20 years in prison on charges including terrorism.

The detainees have denied the charges against them, and human rights groups have deemed all three to be political prisoners.

(See Deadly Clashes Between Police and Shia Muslims in Azerbaijan).

Kazimli said that the government’s minor concessions in January had been a calculated tactic to divert the anger of the international community. However, at the first opportunity, the regime had cracked down once again.

“Therefore, international organisations should be consistent and principled in their demands against the Azerbaijani authorities,” he continued. “They should constantly keep the issues of violation of human rights and freedoms in focus, and not turn a blind eye when local civil society, media and political organisations are being destroyed.”

Giving Voice, Driving Change - from the Borderland to the Steppes
Azerbaijan
Detentions, Regime
Connect with us