The limits of Moscow’s security promises now clearly demonstrates that Yerevan must adjust to a dangerous new reality of standing alone. 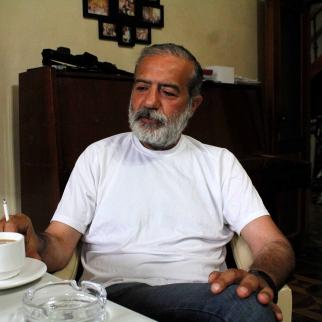 As an Azerbaijani blockade continues, a Syrian Armenian in Stepanakert reflects on war and family.

The limits of Moscow’s security promises now clearly demonstrates that Yerevan must adjust to a dangerous new reality of standing alone.

The blockade that has cut off Nagorny Karabakh from Armenia and the rest of the world for five weeks is the latest move in Azerbaijan’s strategy to drive out the Armenian population from the region. This strategy has been largely successful due to both increasing Azerbaijani strength and increasing Russian weakness.

Since December 12, 202 Azerbaijani so-called eco-activists, supported by Baku’s central government, have been blocking the corridor, the only road in and out of the Armenian-populated territory.  Russian peacekeepers, deployed in November 2020 as part of the Kremlin-brokered agreement that ended the second Karabakh War, are tasked with monitoring the ceasefire and providing security on the Lachin corridor.

But the 000 Russian soldiers have been unable to break the stalemate and Karabakh remains under siege amid a climate of fear, insecurity and uncertainty. In what started with a cutoff of natural gas, Azerbaijan has moved to further disrupt electricity, mobile phone and Internet connections, and - most destructively - to isolate Karabakh.

A NEW CONTEXT OF RUSSIAN WEAKNESS

In open defiance of Moscow, Azerbaijan is taking advantage of Russia’s inability to act. This weakness, largely due to Russia being distracted and overwhelmed by its invasion of Ukraine, has triggered a degree of complicity, with Russian peacekeepers unwilling to challenge the blockade.

Against that backdrop, Russia has now become a serious challenge for Armenia as both an unreliable security partner and provider.

The unwillingness to counter Azerbaijan’s siege of Karabakh has shown Russia’s failure to fulfill even the most basic obligation to Armenian security, and Moscow’s weakness in this area was evident well before this most recent crisis.

Last year, Yerevan was confronted with the stark failure of the Russian-led Collective Security Treaty Organisation (CSTO) as a security provider.  The organisation, while ready to intervene in Kazakstan’s unrest in January 2022, failed to support Armenia in the wake of Azerbaijan’s attacks and incursions into its territory.

On September 14, 2022 Armenian prime minister Nikol Pashinyan formally invoked the CSTO’s Article 4 for mutual defence, akin to NATO’s Article 5, but to no avail. Baku is not a member of the security bloc. During a visit to Yerevan, a CSTO delegation led by secretary Belarusian general Stanislav Zas was met with public protests and calls for Armenia to withdraw from the security bloc.

Such dashed hopes also provided the context for Yerevan’s January 2023 decision to refuse to host CSTO military exercises, in a rare display of Armenian frustration, if not rejection, of the organisation.

"The logic and expectations of Russia’s security obligations no longer apply."

Armenia’s weakness has also played a role in the timing of the blockade.  The combination of Russian inaction and Armenian inability to respond to Azerbaijan’s blatant violations of the 2020 ceasefire agreement only encouraged further escalation. The Armenian government seems to have little leverage in countering the siege of Karabakh.

This humanitarian crisis is driven by Azerbaijan’s disregard of norms and standards of behaviour, violating the terms of the fragile ceasefire, and does little to inspire confidence in Baku’s of post-war security.

Rather, the real challenge is Azerbaijan’s confrontation with the international community, which has a clear responsibility to protect Armenian victims in the face of such egregious aggression.  The immediate and urgent solution is for Western and international engagement, especially given the failure of the Russian response.

Azerbaijan is emboldened by the perception of its leverage over the West after a strategic gas deal with the EU, bolstered by the encouragement of its military patron Turkey.  Nevertheless, the Azerbaijani leadership is playing with fire, testing the limits of Russian patience and inviting a possibly deadly day of reckoning between Moscow and Baku.

In this post-war period of insecurity and uncertainty, one thing is clear: Russia has become consistently unreliable for Armenia.  Today’s Russia poses a deadly new challenge not just to its enemies and rivals, but apparently also to its partners.  And since Moscow’s failed invasion of Ukraine, the logic and expectations of Russia’s security obligations to Armenia no longer apply.

The lesson for Armenia, home to Russia’s 102 military base with about 3,000 troops, now centres on the need for strategic adjustment, if not reorientation. Armenian foreign policy has long been defined by a pursuit of complementarity, as Yerevan sought a balance between its security partnership with Russia and its interest in deepening ties to the EU and the West.

Armenia’s policy has been difficult to maintain over the years, especially given the underlying trend of its over-dependence on Russia.  But as the limits of Russian security promises now clearly demonstrates, Armenia must adjust to a dangerous new reality of standing alone.  Obviously Yerevan lacks the leverage to directly challenge Russia.  Yet it is endowed with expanded strategic significance, strengthened by a greater degree of stability and resilience, and bolstered by a rare commodity of democratic legitimacy than each of its neighbours.

Richard Giragosian is the Director of the Regional Studies Center (RSC), an independent think tank in Yerevan, Armenia.