Some villages have been divided in two by new boundaries.

Some villages have been divided in two by new boundaries. 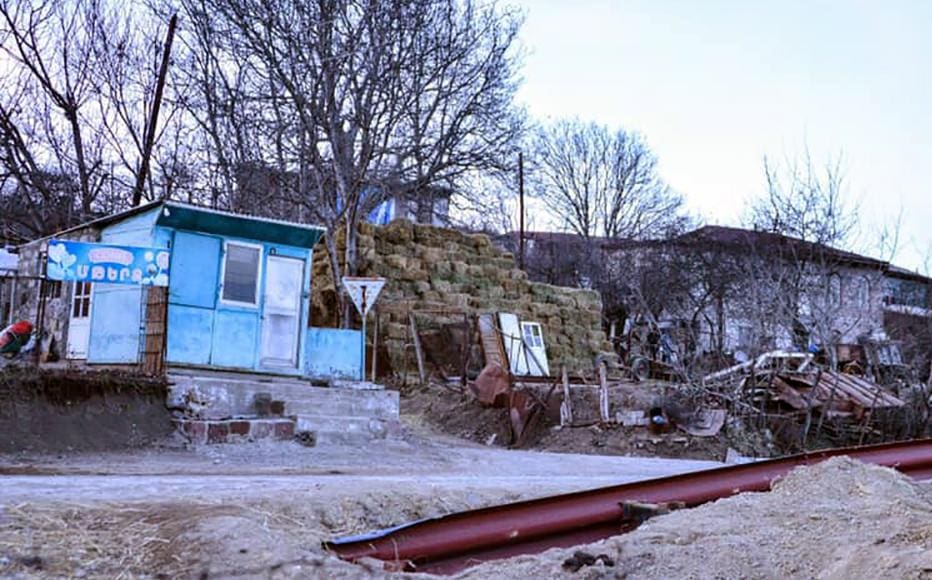 A road cutting through the village of Shurnukh that divides the area into sides controlled by Armenia and Azerbaijan. (Photo: Armenia's Ombudsman's Official FB Page)
The link has been copied

Armenian officials warn that citizens within the state borders of Armenia risk displacement due to the arbitrary way post-ceasefire boundaries are being designated.

As well as parts of Karabakh, the November 9 deal transfers seven regions surrounding the breakaway republic back to Azerbaijan.

It remains unclear how the border is being decided, given large discrepancies between Soviet-era demarcations – when such internal boundaries were largely meaningless – and current facts on the ground.

So far, demarcations in the southern and northern regions of Syunik and Gegharkuniq have reportedly been carried out by Azerbaijani officials using GPS or Google maps, with military personnel dispatched to tell locals that they had to leave their land and homes.

Human rights ombudsman Arman Tatoyan told reporters on January 12 that the demarcation process was violating the rights of Armenian citizens as well as impinging on the country’s internationally recognised borders.

He pointed to specific examples of cases under dispute, for instance in the village of Shurnukh in Syunik, now divided by a narrow road into an Armenian and an Azerbaijani part. One villager he named as Styopa Movsisyan had had his home and farm split between the two.

“Border demarcation without proper research and working commissions is a violation of international law,” Tatoyan said.

Tatoyan highlighted other cases in Shurnukh, Vorotan, Agarak Yeghvard and elsewhere in which locals had lost both their homes and hundreds of acres of agricultural land. In Gegharkunik, investors also lost property including the Sotk gold mine, most of it now under Azerbaijani control.

He said that all those concerned had the right to compensation from the Azerbaijani authorities.

Shurnukh village chief Hakob Arshakyan said that 12 families – comprising 37 people - had been displaced, all of whom had property certificates issued by the administrative headquarters in Goris during the Soviet era.

He said that the villagers had complained to officials in Yerevan as well as local lawmakers.

In late December, Armenian prime minister Nikol Pashinyan travelled to Syunik to meet residents and was met by furious protestors.

Narek Ghahramanyan, a lawmaker from the ruling My Step party, who comes from Syunik and represents the area, said that he saw no human rights violations inherent in the demarcations.

“Those are state borders, ratified by the Republic of Armenia’s National Assembly back in 2010. Who violated their rights? The border?” he asked.

Tigran Khzmalyan, co-chair of the European party of Armenia, said that the demarcation was provisional and that the issue could eventually be brought back into the circle of international law and Minsk Group.

“I reiterated more than once that [Russian president Vladimir] Putin was working in collusion with the Azeris and especially Turks,” he said. “That was a humiliating trade for us.”

Political commentator Armen Chibukhchyan said that it was concerning Russia was willing to accede to Azerbaijani demands for control over Armenian territories and strategic positions.

“It raises eyebrows that the Russian president called that process a demarcation, but demarcations assume totally different procedures,” he said, adding that introducing international rather than Russian peacekeepers into Karabkah would have reduced the risks of territorial loss and kept the Minsk Group more involved in the process.

Moscow, he continued, was consistently serving Azerbaijan’s best interests “at our expense”.

“Russia’s attempt to share [its influence over] Azerbaijan with Ankara while consistently trying to avoid escalations with the latter will inevitably play down Armenian interests,” he concluded.

Giving Voice, Driving Change - from the Borderland to the Steppes
Armenia
Land, Internally displaced
Connect with us