Opposition protests continue over terms of treaty with Azerbaijan.

Opposition protests continue over terms of treaty with Azerbaijan. 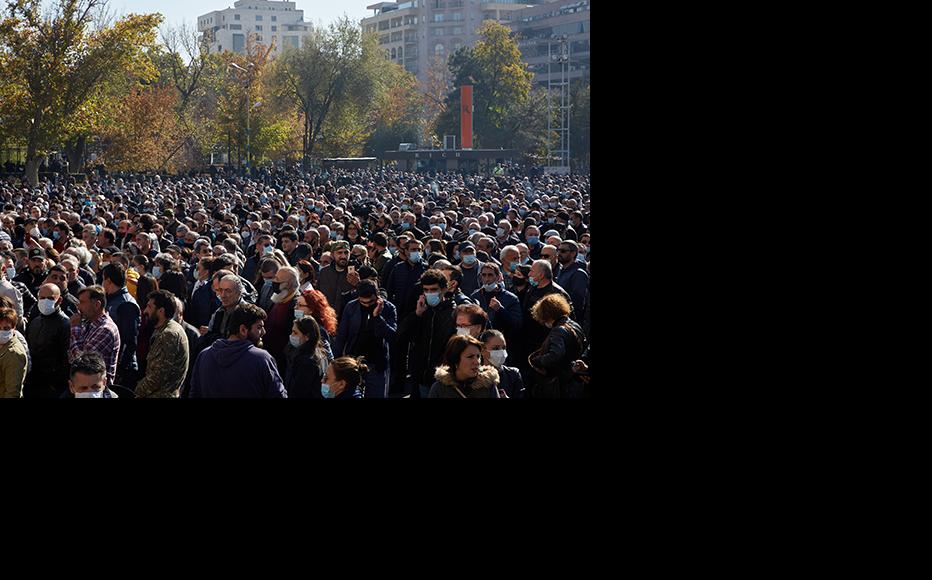 A crowd of protesters gather to demand the resignation of Armenian Prime Minister Nikol Pashinyan on November 11, 2020 in Yerevan, Armenia. (Photo: Alex McBride/Getty Images)
The link has been copied

Opponents see the trilateral agreement signed on the night of November 9 as an act of treason, while the government has argued that Azerbaijan’s military might had left no other option.

According to the deal, Armenia will return the Kelbajar region to Azerbaijan by November 15 and the Lachin area by December 1. The five kilometre wide Lachin corridor will remain under the control of peacekeeping forces to ensure Karabakh’s connection with Armenia, bypassing the city of Shusha.

In addition, the regions around Karabakh will be returned to Baku’s control, Russian peacekeepers stationed along the line of contact and a communication route established between Azerbaijan and the Nakhichevan Autonomous Republic through Armenia’s southern Syunik region.

After the deal was announced, people flooded the streets of Yerevan in protest and stormed parliament buildings, government offices and the prime minister’s residence.

However, Pashinyan and Arayik Harutyunyan, the head of the Karabakh administration, both said they had had no choice but to agree to the terms of the truce brokered by Russia and Turkey.

“Otherwise, we would have lost all of Artsakh [the Armenan name for Karabakh],” Harutyunyan said during a Facebook live broadcast on November 10.

During his own Facebook live address the following day, Pashinyan said that he had decided to sign the agreement following consultations with the country’s armed forces.

“A couple of more days and we would have lost Stepanakert, and our troops would have been besieged,” he concluded.

“Prime Minister Nikol Pashinyan agreed to sign a decision after taking into account the analysis and the assessment of many aspects of the situation,” Chief of the General Staff of the Armenian armed forces Onik Gasparyan explained in his November 11 statement. “This is a very bitter truth for us, but it was the result of an objective evaluation of the situation.”

There appeared to be a clear political aspect to the protests too, headed by former president Serzh Sargsyan’s Republican Party and Prosperous Armenia, led by oligarch Gagik Tsarukyan.

The billionaire politician had been arrested months earlier on charges of electoral fraud but released on October 26 in a gesture signaling the authorities’ intention to promote political unity.

Tsarukyan was also among several opposition politicians arrested during the rallies who then announced themselves to be political detainees.

For his part Pashinyan, who ousted Sargsyan in the peaceful 2018 Velvet Revolution, accused his political opponents of exploiting the crisis.

In an attempt to stabilise the situation, President Armen Sarkissian announced the beginning of consultations with the main political forces. Gasparyan also met opposition leaders and asked them to halt demands for an early parliamentary session to abolish martial law, enacted since the beginning of the Karabakh war.

Some opposition forces accepted his proposal, including Edmon Marukyan, the leader of the Bright Armenia opposition party.

“At the request of Onik Gasparyan, we will not demand the early parliamentary session on ending martial law for seven days,” Marukyan told IWPR, adding that nonetheless Pashinyan should resign as soon martial law ended.

“The Armenian leadership led by Pashinyan lost the war. A politician who has lost the war cannot be the leader of a nation.”

But other groupings continued the protests, with rallies drawing thousands that often ended in clashes with police, who warned demonstrators that such mass events were banned during martial law.

“Pashinyan’s resignation is the only possible option to change something in our favor in his traitorous decision to surrender the territories of Artsakh to Azerbaijan,” Ishkhan Saghatelyan, from the ARF Dashnaktsutyun party, told a November 11 rally.

Residents of Karabakh who had fled to Armenia were amongst the protestors. Many said that the agreement would not enable them to return, because they feared for their safety despite the presence of Russian peacekeepers.

“We want to be able to peacefully and safely return to our homes, even if there are Russian peacekeepers there,” said Lida Avetisyan, from Karabakh. “But when the Turks are in Shusha [a reference to the possibility of Turkish troops taking a peacekeeping role] and the Azerbaijanis get the opportunity to return to Karabakh, I cannot feel safe.

“Until Karabakh has no status, we cannot live there and actually become citizens of Azerbaijan. And if something happens to us, if the Azerbaijanis attack us, then what? Aliyev will say that these are not Azerbaijanis, but some bandits. We saw it in the early 1990s.”

Another protestor, who gave his name only as Anahit, expressed his anger at those who suggest that they simply went back home.

“I would tell those who offer us to return to Karabakh in the given circumstances, why don’t we exchange our homes to let them live there themselves,” Anahit said.

While the opposition parties and protestors continue to demand Pashinyan’s resignation, he has given no sign of even considering this option. Their calls for the suspension of the ‘ceasefire agreement also appear unrealistic.

“We have several days to change something and somehow correct Pashinyan’s treacherous decision,” said Arpine Hovhannisyan, a lawmaker from the former ruling Republican Party, referring to the pledge that territories be handed over by November 15.

“There is still a chance to change certain provisions of the trilateral agreement on Karabakh or a future agreement which will be developed on the basis of this agreement through negotiations, but this requires a different government and different negotiator,” agreed political analyst Vigen Hakobyan. “After the war in Karabakh, the positions of the current government have weakened, not just in the country, but internationally as well.”

However political scientist David Hovhannisyan, himself a former diplomat, said it was unlikely the opposition could amend the agreement even if they formed a government.

“The Russian peacekeepers have already been deployed to Karabakh,” he said. “The document is already in force. It is possible to make some amendments to a future agreement, but this requires proactive diplomacy. What is happening in Yerevan now is a simple struggle for power.”

Giving Voice, Driving Change - from the Borderland to the Steppes
Armenia
Conflict resolution, Opposition, Protests
Connect with us