Families of detainees demand answers about the fate of loved ones.

Families of detainees demand answers about the fate of loved ones. 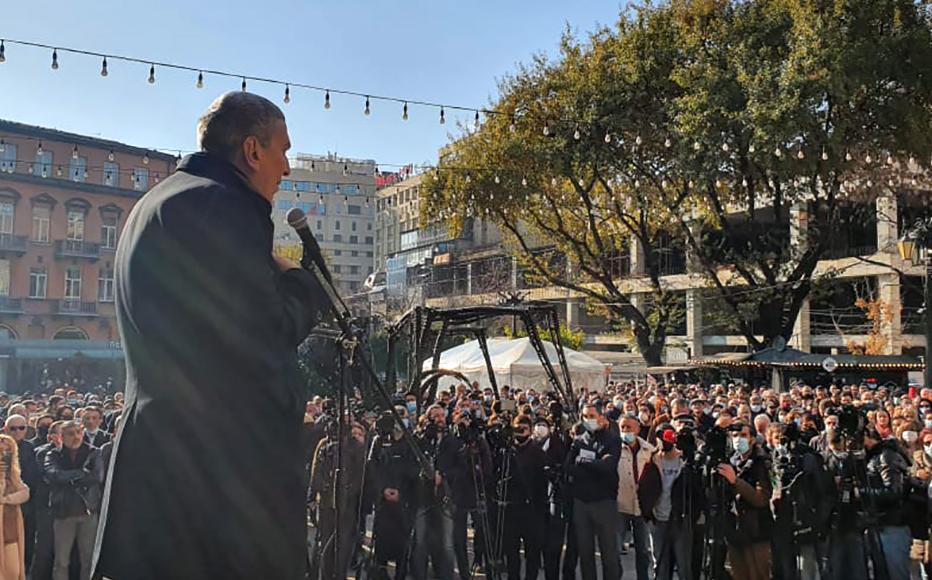 Armenians come out to protest for the return of their sons and ask the countries of the OSCE Minsk Group to pressure Azerbaijan. (Photo: Arshaluys Mghdesyan)
The link has been copied

Two months after hostilities ended in Karabakh, the whereabouts of many Armenian soldiers and civilians detained in Azerbaijan remains unclear, with relatives concerned that Yerevan is not doing enough to locate them.

The ceasefire agreement signed on November 9 by Yerevan, Baku and Moscow did not specify the time frame for implementing the “exchange of prisoners of war and other detainees.”

Yerevan and Baku recently announced that this would be carried out based on the “all for all” principle. According to official information, this means that even those who were captured before the second Karabakh war, which broke out on September 27, are eligible for exchange.

The first swap took place on December 14, when 44 detainees were returned to Yerevan and 12 to Baku.

However, there is no information about other detainees, and the number of Armenian prisoners has increased since the end of the war, despite the deployment of Russian peacekeepers in the conflict zone.

On December 10-12, more than 60 Armenian military personnel were captured following armed clashes with Azerbaijani troops in the villages of Khtsabert and Old Tager in the Hadrut province of Karabakh.

Many of them were from the Shirak province of Armenia, and their families said that they only learned of their detention when video footage was released on social networks.

Even then, the Armenian defence ministry failed to respond to their enquiries for two days, until the relatives began a series of public protests.

“We have only one demand - to return our boys,” the father of one of the captured Shirak soldiers, who asked to remain anonymous, told IWPR. “When the war broke out on September 27, my son went to defend his motherland. And now, I ask the government - where is my son? Who can guarantee that my son and his friends will come back? I know many from Shirak whose sons were taken prisoners.”

The head of the de facto Karabakh administration, Arayik Harutyunyan, subsequently confirmed that several dozen Armenian soldiers had been captured by Azerbaijan. The information was in turn verified by Baku through the commander of the Russian peacekeepers in Karabakh, Ruslan Muradov.

However, the governments of Armenia and Karabakh do not disclose the exact number of prisoners and missing persons.

Siranush Sahakyan, a legal representative of the Armenian prisoners at the European Court of Human Rights (ECHR), said that she currently knew of 150 prisoners of war.

“Azerbaijan is hiding Armenian prisoners, violating the ‘all for all’ principle,” she continued. “We have already submitted 75 applications to the ECHR to defend the rights of Armenian prisoners in Azerbaijan. In the case of 65 detainees, the court applied an interim measure and requested a response from the Azerbaijani side.”

Her team collects data on prisoners from various sources, including videos posted by Azerbaijanis on social networks. As soon as enough data is collected, they

file a lawsuit with the ECHR and follow up through other international mechanisms. She said that the team would soon be submitting 60 new claims to the ECHR.

At the government level, issues related to prisoners of war and missing persons are handled by an interagency commission headed by the deputy prime minister Tigran Avinyan. This has already met several times, and Avinyan – along with Prime Minister Nikol Pashinyan and Defence Minister Vagharshak Harutyunyan - has held meetings with the relatives of prisoners of war and missing persons.

However, official statements that everything possible is being done for the missing have not convinced their families and friends, who demand more effective and concrete measures.

“Nobody gives us clear answers about when our sons will be released from captivity,” Varduhi, the mother of a prisoner from Armenia’s Kotayk province, said. “They just repeat that ‘everything possible is being done’ to bring them back. This is my son; he went to war as a volunteer. And now they are keeping us in darkness.”

Varduhi’s son, whose name she did not disclose, went to fight in Karabakh on September 28. He has a wife and two small children.

“The children are waiting for their father; they fall asleep holding a photo of him in their hands, praying for his return from the war. What can I tell them?” she asked.

Varduhi last spoke to her son on the phone on October 30. The conversation was short.

“My son told me that everything was all right and there was no shooting where he was, no fighting. He asked how we were and asked me not to worry and hung up. Now I understand that he just wanted to calm us,” she explained.

A week later, she recognised her son in videos posted on Azerbaijani social networks about Armenian prisoners. She approached numerous government agencies, but all refused to either confirm or deny her son’s detention.

In despair, she and other parents of prisoners and missing persons held a rally at the Russian embassy in Armenia and wrote an open letter to Moscow pleading for them to “help find their relatives through Russian peacekeepers in Karabakh”.

Actors and celebrities in Armenia also organised a rally where they called on Russia, France and the US – the member states of the OSCE Minsk Group - to take action.

“We lost hope in our government,” said Hrant Tokhatyan, an Armenian actor and one of the rally organisers. “It is simply incapable. We call on the member states of the OSCE Minsk Group to put pressure on Azerbaijan so that Baku will return our children as soon as possible.”

“From the very beginning, the Armenian government liaised very badly with the relatives of the prisoners and missing persons. The communication was very poor,” said international law expert Ara Ghazaryan, adding that the country’s leadership should have focused on this issue as soon as the war ended.

“We are facing poor management, sometimes an information vacuum,” he continued. “Relatives of prisoners and missing persons do not know where to go and what to do. There is an impression that the state simply is not there.”

Many parents, dissatisfied with the answers of officials in Yerevan, have travelled to Stepanakert, the unrecognised capital of Karabakh, to try to find answers.

One father, Harutyun, from Echmiadzin, a town near Yerevan, said he had come to “sort things out on the ground”.

“I sent two sons to war to protect this state and now this state does not want to talk to me,” he continued. “At first, I received news that my younger son died, but I knew that my older son was alive. And, now there is no news of him either.”

The younger son was serving in the army when the war began, and the older one then volunteered and went to the front line to “be with his brother”.

“The younger, according to my information, died in mid-October,” Harutyun said. “I talked to the elder in early November. After that, he did not get in touch. I don’t want to believe that my second son is not alive either. I believe that he is alive, he will return, I can feel it.”

Giving Voice, Driving Change - from the Borderland to the Steppes
Armenia
Detentions, Conflict
Connect with us