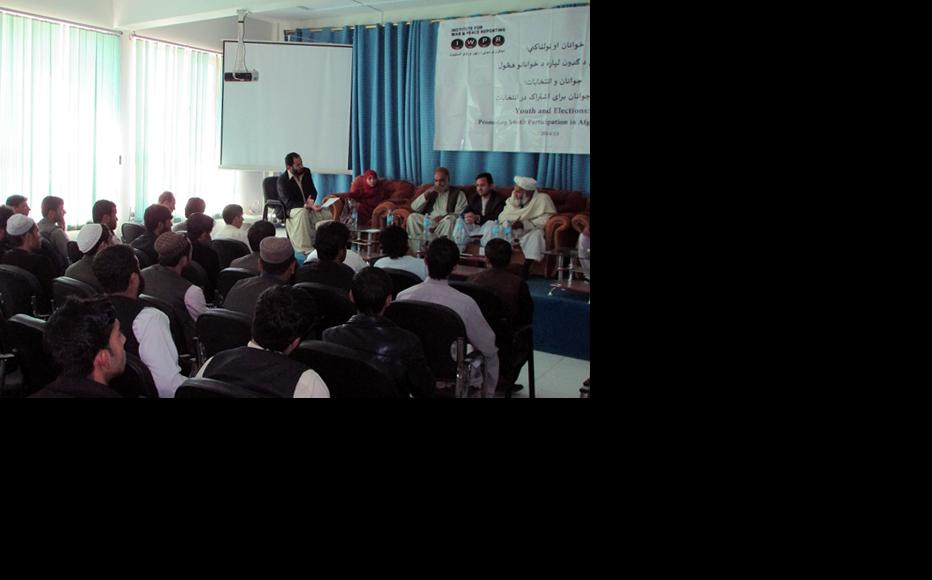 IWPR debate in Kandahar, November 9, 2015. (Photo: IWPR)
The link has been copied

The Afghan government’s tax system needs tighter oversight and complete transparency, according to speakers at a series of IWPR debates in Afghanistan this month.

Bashir Ahmad Saleh, secretary of the Kandahar press club, put the problem in simple terms, “People don’t know what the state does with the money it collects, so they don’t pay taxes.”

Saleh claimed there was huge corruption in Kandahar’s tax office.

“A [tax service] staffer will tell a shopkeeper, ‘Give me 2,000 afghanis and I’ll cut the 10,000 you owe in tax to 4,000 afghanis, or maybe not issue you with a tax demand at all,’” he said. “In the face of such massive corruption, how is it possible for the government to be self-sufficient?”

Abdulsamad, deputy head of the revenues department for the southern Kandahar province, said accusations of corruption were unfair. In reality, the tax service was battling persistent tax evasion with outdated systems.

“Some individuals have avoiding paying taxes for many years, and they have even beaten and threatened tax collectors,” he said.

Another problem was that the revenue collection system was antiquated. His taxmen had to visit each potential tax source and decide how much they should be liable for, using their personal judgement.

Other panellists said that this was ineffective way of going about things, since tax must correlate to income. Provincial councillor Serena Faizi said the current system was an open invitation for fraud.

Abdulsamad admitted that the system was vulnerable to abuse, but said it was up to central government to introduce new procedures.

He also noted that the finance ministry set high targets for provincial revenue departments to meet, and this put further pressure on taxpayers. Abdulsamad said Kandahar’s target in the previous year ending March 2015 was more than one billion afghanis (about 15 million US dollars), and the department managed to raise 979 million.

Speakers at a debate in Wardak, west of the capital Kabul, said the government needed to educate the public about the importance of paying tax.

Provincial councillor Wahidullah Akbarzoi said his colleagues needed to play a part in encouraging people to pay up.

“The Afghan tax laws are fair, and people should support this process and pay their taxes properly,” added civil society activist Najibullah Fikrman.

Maulavi Tawasuli, a member of the council of Muslim scholars in Wardak, said it was only right for everyone to pay taxes in proportion to their wealth.

“Afghanistan is a poor country, but it’s unfortunate that people don’t pay taxes or ‘zakat’ [religious tithe for charitable purposes],” he said. “If everyone paid their taxes, it would cover the government’s expenditure for the full year.”

Mohamad Awrang Mukhtar, head of the provincial department of information and culture, said the media could help by highlighting the importance of taxation. People would be more willing to cooperate if they realised the revenue was spent on public services, he added.

Sayed Shafiullah, who runs the tax department in Wardak, insisted that the collection process was already transparent. All revenues were funnelled into a single account, “and then, after the annual budget is approved, allocations are made to individual government agencies to spend”.

In another debate held in the Khoshi district of Logar province, south of Kabul, participants said the government had a responsibility to report on where the tax money went.

Mohammad Zahir, the chief tax officer in Khoshi, maintained that his own department had managed to collect revenue effectively, although he agreed that nationwide there was a problem with corruption.

Religious scholar Rizwan Ali said the public had a responsibility to pay their taxes on time so that government employees could in turn be paid.

Civil society activist Shafiullah Afghanzai retorted that people would be happy to pay if they could be confident that the revenue was not being stolen by corrupt officials.

The local government chief in Khoshi, Abdul Hamid Hamid, acknowledged that much of Afghanistan was still so dangerous that tax collection was difficult. But it was nevertheless essential if the government was to wean itself off foreign assistance.

“Foreign aid has now fallen, and that means we must be happy to pay taxes so that our government can support itself,” he said.

Figures from the International Monetary Fund indicate that in the last tax year, the government spent 300 billion afghanis but only earned 100 billion from domestic sources, 78 billion of this in taxes. The difference was covered by grants from the international community.

“The Afghan government could free itself from reliance on the international community by collecting tax revenue, and it’s vital for the public and the government to cooperate on this,” he said.

At the same debate in Zabul, civil society representative Mohammad Ibrahim Ibrat said that while it was useful to develop a culture of paying tax, the government still needed to ensure proper oversight.

Mahmud Sherzad, head of Zabul’s tax office, agreed there was a problem and noted that his own office had been able to collect taxes only from government employees, some shopkeepers and just a few of the province’s construction and logistics companies.

Afghanistan: Youth and Elections
Afghanistan
Economy
Connect with us