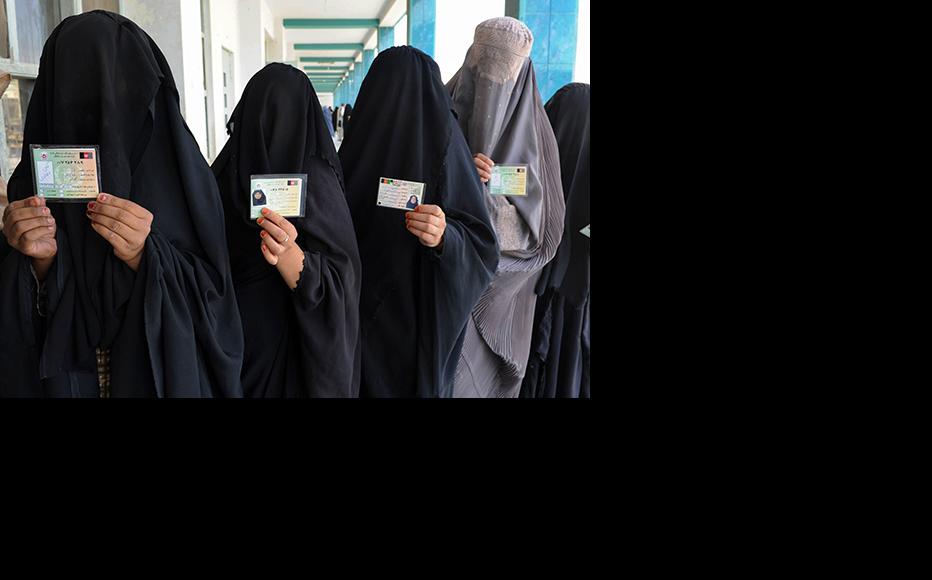 Afghan women show identification cards as they wait to cast their votes. (Photo: Banaras Khan/AFP/Getty Images)
The link has been copied

Residents of the southeastern Afghan province of Paktia are warning that a flourishing trade in women’s ID cards has sprung up ahead of the October elections, fuelling fears that corrupt candidates could exploit the stolen votes.

Conservative traditions mean that most women in Paktia do not have ID cards, also known as tazkera, which are a prerequisite for registering to vote. After registration at one of the many centres that have been set up ahead of the elections, a small sticker is fixed to the card to show the holder is eligible to vote.

Although applications for the cards themselves – as well as registering to vote – need to be made in person, it appears that some locals are managing to obtain tazkera by an indirect route.

While there are those who claim that they are merely trying to help out women who are often restricted in their ability to travel, others are quite open about this lucrative form of fraud.

Haji Padshah, a tribal elder in Andwam village in Mirzaka district, told IWPR that he was travelling round the villages with two photographers. They took pictures of women in the presence of their husbands or male relatives and used these photographs to apply for tazkera.

Padshah said that he managed to get 20 to 30 ID cards at a time,and would then also register the tazkera for voting so as to obtain the required sticker.

“I am doing it to serve the women and make the process easier for them,” he said.

For some, this has become a full-time occupation. Habib Gul (not his real name), lives in the village of Slimankhail in Samkani district and said that he now makes a living from buying and selling tazkeras.

The 45-year-old said that in recent weeks he sold 37 tazkeras in women’s names.

He said, “The price of one woman’s tazkera is between ten and 30 dollars.”

Some men appear to view the ID cards of female family members as a useful resource to be exploited.

Khatera, 24, lives in the Zahawi area of the capital Gardiz. She said that a week ago, her uncle brought home voter-registered tazkera for her and six other women of their family.

“Last night, my father along with my brothers and uncles, were discussing what price they should sell these ID cards at,” Khatera said.

Political analyst Zaheergul Zaheer said that the trade in women’s ID cards represented a new low in electoral corruption, and castigated workers at tazkera distribution centres and IEC officials for not stamping out such fraud.

“The buying and selling of ID cards signals the start of new crisis that might delegitimise the upcoming elections,” he said.

Some local officials deny that women’s ID cards are being traded..

Saidullah Bismel is head of Paktia’s population registration department and in charge of the distribution of tazkeras. He rejected allegations of fraud, adding that women had to visit their centres in person to receive their ID cards, just as men had to.

“Every day we distribute more than 100 national ID cards to women,” Bismel said.

Others are less confident that women are not being exploited in an attempt by local strongmen to skew the elections in their favour.

Moska Mangal, a representative of the provincial department of women’s affairs, said that this type of fraud robbed female citizens of the fundamental right to take part in their country’s democratic processes. There was also very little awareness amongst women that the elections were taking place at all.

Due to the cruel traditions prevalent in Paktia, she continued, “women do not [in effect] have the right to stand as candidates or to vote for others”.

She concluded, “It is unforgivable that a husband sells his wife’s vote.”

For their part, women in many of Paktia’s villages insist that the practice is ongoing.

Khatema, a 21-year-old from Dodai village in Lazha Mangal district, told IWPR that her father had sold the ID cards belonging to the seven female members of her family to the local headman for 60 dollars.

Nasima, 43, a resident of the Kohseen area in Sayed Karam district, said that a few days ago her husband Khan Zaman and his brother Faqir Mohammad had brought a photographer to the village to take her picture.

Some days later, her brother-in-law returned with 16 tazkera, all with voter registration stickers already attached.

“From their talks, I have learned only that my husband and Faqir Mohammad want to sell these tazkeras,” Nasima said.

Bibi Hawa, 51 who lives in the Kalalgo village of Zurmat district, said that her husband had also recently got a tazkera for her and had it registered at a local centre.

Hawa said that her husband had taken some photos of her and told her that he would get her a national ID card, but added that she had never visited any official institution at any point during the process.

“I am an uneducated person; I do whatever my husband tells me,” Hawa said.