Hopes that new infrastructure could replace opium farming in the southern province.

Hopes that new infrastructure could replace opium farming in the southern province. 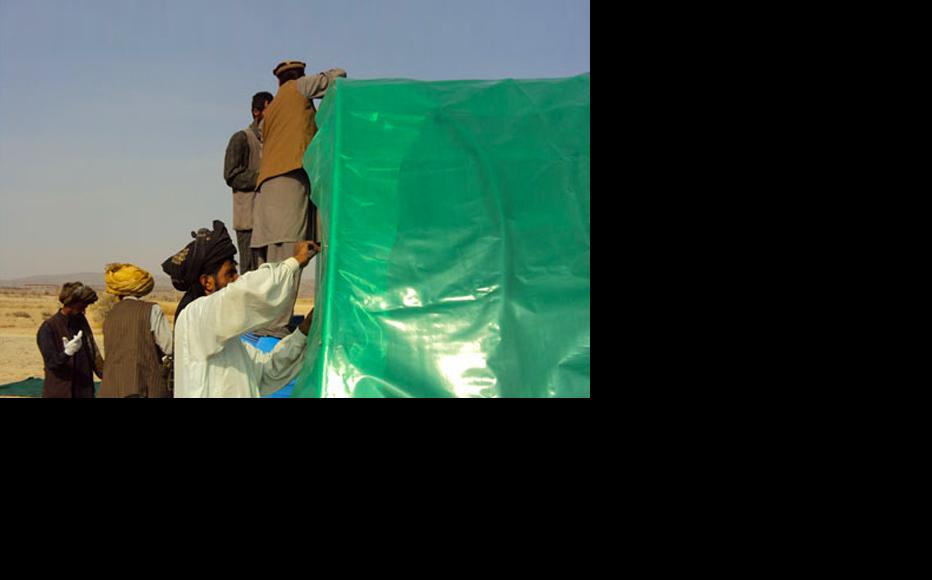 Afghan farmers work together to build a greenhouse. (Photo: ResoluteSupportMedia/Flickr)
The link has been copied

Farmers and officials in Farah say that the use of greenhouses is transforming their largely agricultural economy, with hopes that this could even provide a viable alternative to growing poppy.

“There are more than 100,000 small and large greenhouses in Farah, which have played a huge role in the economic growth of people in Farah, particularly farmers,” said Abdulmanan Mateen, director of the local department of agriculture, irrigation and livestock.

More than 11,000 people in the province are employed in the industry, of whom around ten per cent are women. This year alone, the province produced around 300,000 tonnes of tomatoes and cucumbers, of which 95 per cent had been sold in other provinces of Afghanistan or exported, Mateen explained. Greenhouses had proved particularly successful in central areas including the districts of Pusht Rod and Bala Buluk.

As a result, 22 million US dollars in revenues had been generated for the province’s farmers, an amount he estimated would rise to 30 million dollars by the end of the year.

The greenhouses have provided a boon for locals looking for employment. One man, Abdulhadi, told IWPR that had previously tried to support his family as a migrant worker in Iran. He said that not only did he earn very little money, but he also faced violence and harassment while living abroad.

The 36-year-old was now employed in a greenhouse and said that he was delighted to be back home with his family.

“[My employers] pay me on time and provide me with food three times [a day] and treat me kindly, instead of with violence,” he said. “I call upon people who have gone to Iran for work to come back and work in the greenhouses.”

Wahidullah Safi, head of the local department of labour, social affairs, martyrs and the disabled, said that the greenhouse sector could provide employment opportunities for thousands more people like Abdulhadi.

“Greenhouses are a great opportunity for farmers to produce better yields and good harvests, even outside of the usual growing season,” he said.

Greenhouses are particularly useful in Farah’s hot, very dry climate as they provide a stable, temperate environment for plants to grow quickly.

The average greenhouse is nine metres wide and three metres high, assembled out of semi-circular aluminum and covered with thick, sun-resistant and lightweight plastic. Length varies but is usually between 40 to 50 metres. The plants are watered every day, but using drip irrigation that requires less water.

A 500 metre square greenhouse costs 4,000 US dollars to build. Although a significant investment, they provide consistent yields.

Sardar Wali owns six greenhouses in Farah province and said that had earned 7,300 dollars from their produce over the last 12 months.

However, the 42-year-old claimed that there was no suitable local market for his vegetables and urged the government to develop further trade opportunities.

Abdul Samad, who buys and sells agricultural products in Farah, said that while business was good he faced numerous problems, including difficulty transporting goods due to poor road links and ongoing fighting which halted travel and meant vegetables were left to rot in their lorries.

Shakir, head of export development at the Farah chamber of commerce said that great strides had been made in the provision of agricultural infrastructure.

However, he agreed that a problem remained regarding foreign export markets. Only around 600 tonnes of cucumbers and tomatoes had been sold to Pakistan this year.

“Our biggest problem is not having railways to take our agricultural products abroad,” he said, adding that one possibility would be exporting to India via the Iranian port of Chabahar.

Civil society activists say that investing in the field of agriculture, particularly in greenhouses, would also provide crucial employment opportunities across Afghanistan. Nationwide, the ministry of agriculture built more than 800 greenhouses last year and constructed more than 1,000 so far this year.

In Farah, where a population of some 1.2 million is sparsely spread across ten districts, officials note that poppy remained a widely grown crop in more remote parts of the province.

Lal Mohammad Aziz, director of Farah’s counter-narcotics department, said that the establishment of greenhouses could provide a crucial alternative to opium cultivation.

“A large number of our farmers have turned to growing poppy and other narcotics because of poverty and economic necessity,” he said. “Building greenhouses and other similar agricultural projects can be a great alternative to replace drugs cultivation in Farah province.”