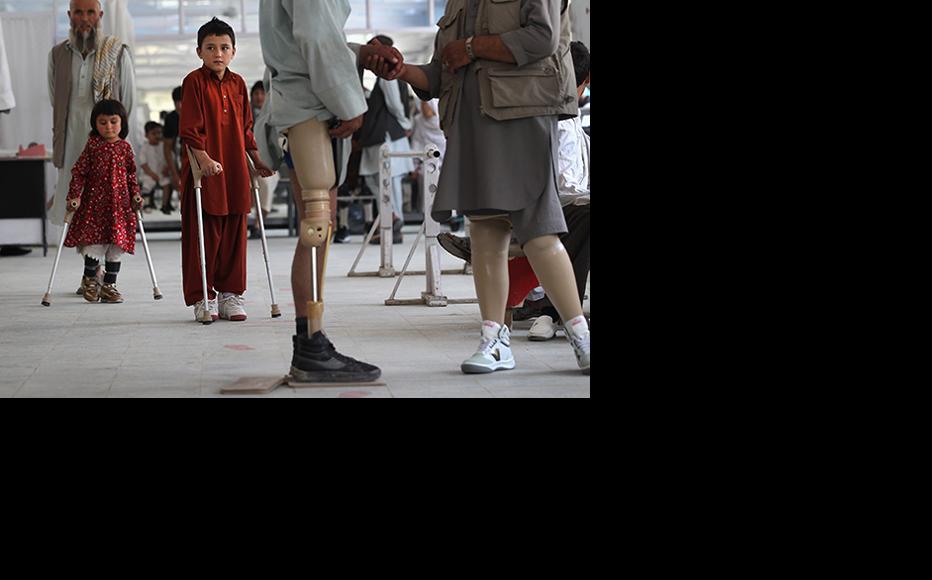 Afghan war amputees and children practice walking at the ICRC orthopaedic centre in Kabul. (Photo: John Moore/Getty Images)
The link has been copied

Fazluddin, a tall, thin 25-year-old who lives in Dolana, central Parwan, has a whole household to support on nothing more than disability stipends.

He himself lost his right eye and suffered multiple injuries aged just two when the family was caught in a Taleban bombardment. His mother, who now lives with him, lost her right arm in the same attack.

Fazluddin also has to support his 55-year-old aunt Suraya, who was paralysed in a grenade strike during the Russian occupation of the 1980s.

"We live in a house that stays cold all winter. We eat once a day,” he told IWPR, explaining that the whole family, including his wife, had to live from the 900 US dollars the household received annually in disability payments.

“We pay 50 dollars rent per month. I still owe money from my wedding. Tell me, what can I do?" he continued.

Despite an impoverished childhood, Fazluddin finished high school and has qualifications in English and computer skills. But he has been unable to find work, he said, because of his disability.

"I went everywhere. When they noticed that I was blind in one eye, they not only refused me work but also made fun of me. I tore up all my school certificates in frustration," he said, adding, "You need either powerful relations or money to achieve your basic rights in this country."

His aunt Suraya said that her experience of decades of living as a paraplegic had shown her that government assurances of aid were meaningless.

"I’ve received nothing from the government except the monthly stipend, which I get with a lot of difficulty, since the day I was paralyzed,” she said, adding that even reaching the bank or accessing other public buildings was often impossible due to the lack of disabled access. “They promised to provide me with a plot of land to live on, but I have not yet received it. They made me many promises, but I received nothing."

Disabled people in Parwan province, just north of Kabul, say that the government has failed to meet its obligations to them despite legislation guaranteeing their rights. Local officials, in turn, say that they are doing their best with the resources available to them

Afghanistan has ratified several international conventions on disability rights, and according to its own Law of Rights and Privileges of Persons with Disabilities, government offices are supposed to fill at least three per cent of their posts with disabled people.

Wakil Ahmad Suhail, the director of labour, social affairs, martyrs and the disabled in Parwan province, admitted that this law had yet to be enforced.

Suhail said that 5,140 disabled people were registered with their office, including 300 women. All received government stipends.

But he said that the only disabled employee he knew of in a local government office was a woman in his own department.

Suhail acknowledged that the government was also committed to a number of other measures including improving education provision and providing low-cost housing for disabled people, although little progress had been made.

But other local officials said that their departments were doing the most they could to support disabled people and their families.

The director of Parwan department for refugees, Aqa Shirin Khalil, said that his office had arranged the distribution of five blocs of residential land plots to refugees, each containing 1,200 residential plots, in the Bini Arsak and Barikab areas of Bagram district.

Out of this number, 650 plots were reserved for disabled people and would be transferred to them free of charge, he continued.

"Residential plots have also been considered for disabled people in the department’s future plans as well, although the number is not yet clear," Khalil said.

Parwan’s deputy director of education, Nizamuddin Rahimi, said that they had distributed 664 plots of land to teachers in the Hufyan Sharif area in central Parwan, including 20 plots for teachers with disabilities.

"The disabled people received the plots for free,” he said.

Mirajuddin Majid, the director of guidance and hajj in Parwan, said that the ministry had allocated 523 places for Parwan residents to make the pilgrimage last year.

This quota included five disabled people, although he noted that applicants had to pay for their own hajj.

"We have always campaigned on this issue,” Ahmad Zia Langari, a representative of the Afghanistan Independent Human Rights Commission (AIHRC), told IWPR. “We also always highlight the problems of disabled people to the government in our annual reports.

“The government needs to read our reports. The parliament should also see our reports and in turn put pressure on the government. We bring up the issue of disabled people in every meeting and gathering and in strategic and lawmaking fields and will continue campaigning."

Parwan provincial council secretary Sahmsulhaq Shaikani acknowledged that disability rights had been the subject of numerous meetings between officials and activists, but said that the government simply lacked the budget to address these problems.

"Disabled people have high expectations,” Shaikhani said. “The government addresses their needs to the extent we are able. We’ve met government officials to discuss the problems of the disabled several times and shared their concerns. The officials promised to address the issues."

He added that when private or state institutions provide aid, disabled people were given priority.

Activists say this is far from enough.

Abdul Hakim Hamdard, the chairman of social council of the disabled people in Parwan, lost both his legs in a mine blast in 1991. He said that the problem was that national and international laws related to disability provision were simply not implemented.

Although Afghan disability law mandates that ministries, government offices, transportation facilities and all new public construction should include facilities for the disabled in their design, this is rarely the case.

Hamdard explained that his advocacy work meant that he needed to access local government offices on a daily basis. This in itself was an enormous struggle as there were no facilities for disabled people, Hamdard explained.

"Sometimes, people help us. They take our hands or carry us up. The major problem for disabled people is how to go up and down the stairs."

Despite this lack of basic provision, some disabled people manage to overcome the considerable obstacles to pursue successful careers.

Mushtari Danish, 34, a resident of Chanki Ulya village of Sayyidkhel District in Parwan, was paralysed in childhood as the result of polio.

Nonetheless, she has been working as a teacher for the last nine years, although she said it had proved terribly hard to find work.

After graduation, she said, "I went to an office and applied to be a teacher. They told me, ‘Go away my child. Even healthy people cannot find a job and you are disabled.’ I was so disappointed."

Undeterred, she not only went on to find work in her chosen field but also drives and has a Corolla car, adapted by the Red Cross to have a hand-operated accelerator and brake. Last year, she completed a degree in Islamic theology in night classes at Parwan’s Alberuni university.