Young people resentful at being pulled out of school to boost crowds at public events.

Young people resentful at being pulled out of school to boost crowds at public events. 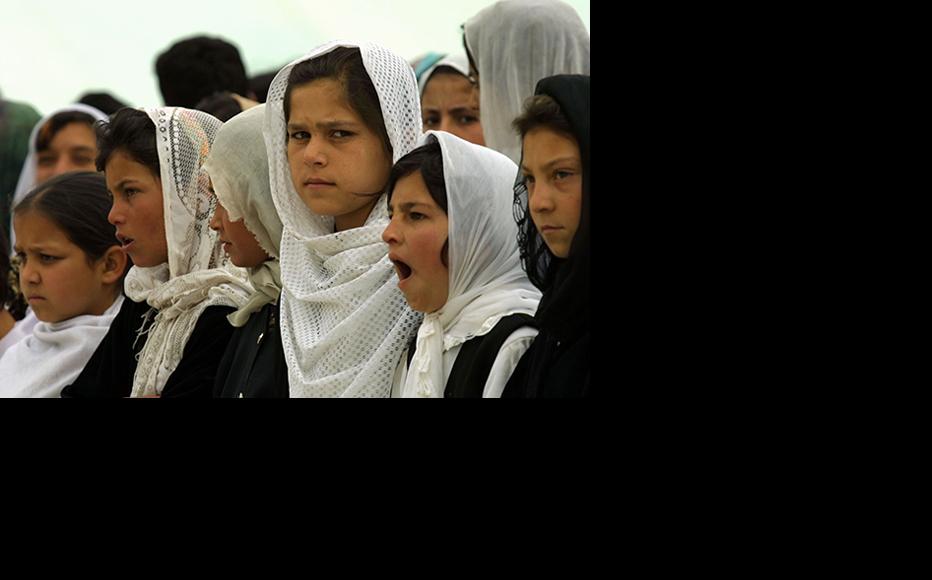 Afghan students in the Khost province are being forced to attend government-organised demonstrations and ceremonies. (Photo: Natalie Behring-Chisholm/Getty Images)
The link has been copied

Students at schools in the southern province of Khost say that they are missing out on valuable lesson time as a result of being forced to attend government-organised demonstrations and ceremonies.

Hamayoon, a student at one Khost school, told IWPR, “We were sitting an exam when authorities from the department of education suddenly turned up and told us to stop answering questions and go to the government guesthouse where a delegation from Kabul was due to arrive.

“We asked the education department officials how it would then be possible to receive the marks for our exams and asked for them to let us continue answering the questions,” he continued. “But they didn’t agree and said the exam was cancelled. They simply gave us top marks, and then we were forced to leave and go to welcome the guests coming from Kabul.”

It has become common practice in Afghanistan, especially in more outlying provinces, for children and university students to be part of the crowds organised to welcome visiting officials.

This had tragic consequences in 2007, when a suicide bomber targeted a parliamentary delegation visiting the northern Baghlan province. More than 70 people were killed and over 100 were injured. Among the casualties were 62 students who had been welcoming the visitors.

Official Afghan government policy is that students should not be used as political tools or exploited for partisan ends.

But students who disobey such orders say they risk being penalised.

One 11th grade student in Khost city, who asked to remain anonymous, said, “There have been times when the teacher has marked me absent even though I was present. Their reason was because I didn’t go to the ceremony.”

Mohammadul Rahman Ayaz, a private school inspector, alleged that students were paid to neglect their studies to attend numerous rallies.

“The managers of these schools send their groups to advertise their schools because these programmes are broadcast on radio and television, and the school’s names are mentioned, their logos are seen and people notice them,” he said. “In fact, they use these students to do their marketing. It’s not important for the school authorities that they are taken away from their lessons.”

Hazratullah Honaryar, head of Khost’s Rawan private school in Khost, denied that sending students to public rallies was a way to advertise his institution.

“We are told by the education department to send students to such programmes,” he said.

Abdul Satar Babrakzai, head teacher at the Abdul Fatah government high school, also said that they had little choice but to send their students to ceremonies.

“The question as to why we send our students to the ceremonies or to welcome visitors should be put to the authorities,” he said.

However, Bakht Noor Bakhtia, the head of Khost’s education department, said that they too were just following orders, although he gave no details about where these instructions came from.

“I know very well that it is wrong and students shouldn’t be sent to every kind of ceremony, but we have been forced to do so; we have to carry out orders,” he said.

Mubariz Mohammad Zadran, the spokesman for Khost’s governor, denied that it was senior officials who demanded children be sent to boost crowds on public occasions.

“We only invite students when celebrating national holidays, when we teach them about the values of such days,” he said. “In this way we try to encourage students to learn how to mark their national days and love their country.”

Khost journalist Nasratullah Tasal said that widespread disillusionment with the government meant that few people turned up to ceremonial events of their own volition.

“In order to show that they can still attract large audiences and for the provincial officials to show the authorities in Kabul that they have popular support and that the public love them, they usually use students to make up for the lack of people,” he said.

Human rights activists warn that withdrawing children from education for this purpose was a clear violation of their rights. They also note the safety concerns that surround crowded public events.

“Children are affected negatively rather than positively by such events because they can’t properly analyze everything,” he said. “Most of our demonstrations and public events are full of violence, emotional speeches are made and it affects the children deeply. They will become more aggressive when they grow up.”