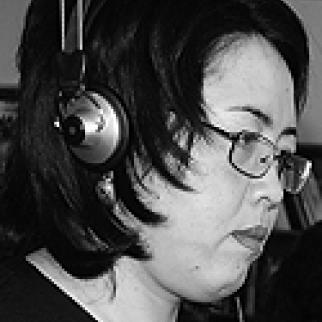 I was born on December, 17, 1969, in Naryn, a mountainous region of Kyrgyzstan, the youngest of nine children. My father taught mathematics. He also used to write short poems, which were popular in our village. People especially valued his koshok songs of mourning. My mother was a doctor.

In 1991, I graduated from the journalism department of Kyrgyz state university and I have had a number of broadcasting jobs. I worked for Chui Regional Television, Kyrgyz National Television, the private channel KOORT and Radio Azattyk, which is the Kyrgyz service of Radio Liberty. In the last 20 years, I have received a number of awards both from the government and non-governmental organisations, mostly for my human rights coverage.

There are two main reasons why I chose journalism.

First of all, journalism is a very important profession in the world today. We serve as a bridge between the public and those whose work affects the public, whether it is a state official, a businessman, or anyone else. We can look for answers on behalf of ordinary people.

The other reason is that journalism can help me widen my own understanding. You acquire a bit of knowledge about a lot of things. Your horizons widen. That is a very comfortable, flexible position from which to jump into something new.

IWPR has helped me to achieve my potential. Working with IWPR, I started to realise what international standards in journalism mean in practice.

My pieces for IWPR have enabled me to gain recognition as a journalist. I was runner-up in the Stremlenie-2009 Internews contest as the best radio journalist for my feature about the post-election situation in Yssykkul that I made for IWPR. At about the same time, I received awards from the Journalists Union, Citizens Against Corruption Union, the Kyrgyz ombudsman and others. I started getting invitations to run training courses. One student of from journalism department even asked for my autograph.

I was really proud of the Yssykkul story, which was about the detention of protesters, because it made me the leading journalist on that topic. And state officials admitted off the record that they were wrong.

Besides journalism, I do some charity work helping to raise money for a local orphanage. My husband and I have also created and maintain a museum to the life and work of Alykul Osmonov, a well-known Kyrgyz poet. I also sometimes work as a public defender (a lay person who can appear on behalf of a defendant in court), mostly in cases involving women or children rights, when it does not overlap with my journalistic work.

Ethics of Conflict Reporting in Kyrgyzstan

Rita Borbukeeva reports on the impact the power cuts imposed all across Kyrgyzstan this winter have had on a children’s hospital in Issykkul province in the north of Kyrgyzstan.

Permanent residents of towns on the shores of Lake Issykkul are unhappy about having to tidy up after the summer tourists.

The trial of opposition activists accused of creating disturbances on election day has been delayed for a second time.

Rita Borbukeeva reports from the town of Balykchi, where opposition members are angry at the continuing detention of protesters over the conduct of the presidential election.

Opposition Pulls Out of Electoral Bodies

Members of opposition parties are stepping down in large numbers from local electoral commissions, claiming they are being pressured to leave by local government officials.

Kyrgyz Farmers at Risk of Brucellosis

So many people in Kyrgyzstan keep livestock that the authorities are struggling to impose health regulations, leading to a heightened risk of animal-to-human disease transmission.

Tourists visiting Lake Issykkul, Kyrgyzstan’s main holiday destination, are on their own if they venture out into the water, and drownings are common.