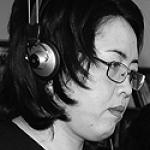 In the northern Issykkul region, some teachers end up running classes in subjects in which they have not specialised, and even work in several schools at the same time.

The school’s head of education flatly denied the reporter’s findings that children in the first two classes were left unattended, saying the only reason was that there had just been a staff meeting

However, when Talgar Adinov, rector of the School of Social and Economic Studies in the town of Balykchi, has conducted a survey of teacher availability in Issykkul region, he found that when teachers had to attend to more senior classes, they often appoints a pupil to mind the smaller children.

He said that other studies showed that pupils in the final year of school – grade ten – in Kyrgyzstan have on average attained the educational level reached by grade eight pupils in other countries of the former Soviet Union.

“They go on to university with that level of knowledge, so of course they pay bribes to get in,” he said. “Then they pay more bribes to pass exams, and after that to enter employment. That’s the result.”