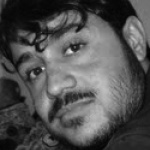 I was born on January 4, 1988, in the Nad Ali district of Helmand province in Afghanistan. My father worked for the government for about 45 years. My family were educated and some members went to Russia for their higher education.

Our life is good at the moment and we live well but it was not always like that. My father faced many economic problems in the past. We have also worked as farmers, but we were always keen to study. We saw education as more important than anything else. As a family we always followed the news.

As a student I loved taking part in cultural activities like poetry readings and also played sport; I love volleyball and have played with many teams.

Before starting work at IWPR, I was a reporter at regional radio station Salam Watandar in Kabul. Around that time, security worsened in Helmand and there were problems in our villages, but no one reported on them.

One of the issues was that of the dowry, which led some young men to go and work abroad for many years.

Another problem was addiction to narcotics of thousands of young Afghans. I worked on reports that helped inform people about the dangers of opium in the hope that they would stop growing the poppy.

I chose journalism because I wanted to serve the community and because I regard it as a very important job. I was keen to be the one who had the courage to ask officials about the problems afflicting the people around me.

My work for IWPR has been satisfying and I have learned a lot from my involvement with press and media outlets.

Besides writing, I have also been trained in photography and self defence. I have written many major reports and it gives me satisfaction that these are important issues in the life of Helmand. People admired me for researching a piece about efforts to divert farmers from opium poppy to pomegranates, and said they would be very happy if the government and international community would give them trees for their orchards.

Now, the government in Helmand is going to create orchards covering 1,000 acres for the farmers in Helmand as well as giving them fertilisers. This was my best report and I remain proud of it.

I would not be where I am without IWPR. My IWPR reports have been admired by my colleagues and those who have access to the internet. Reports like this come from the bottom of my heart.

This work makes me feel a responsible member of society and I hope I repay people’s trust in me. If my work helps keep a government in check, that is a bonus and I am happy to play the role of a conduit between the government and the people.

Stories by the author

Residents of Abkhazia reliant on medical treatment in Georgian-controlled territory have been hit hard by the closure of the Enguri bridge, which...

Residents of Abkhazia reliant on medical treatment in Georgian-controlled territory have been hit hard by the closure of the Enguri bridge, which...