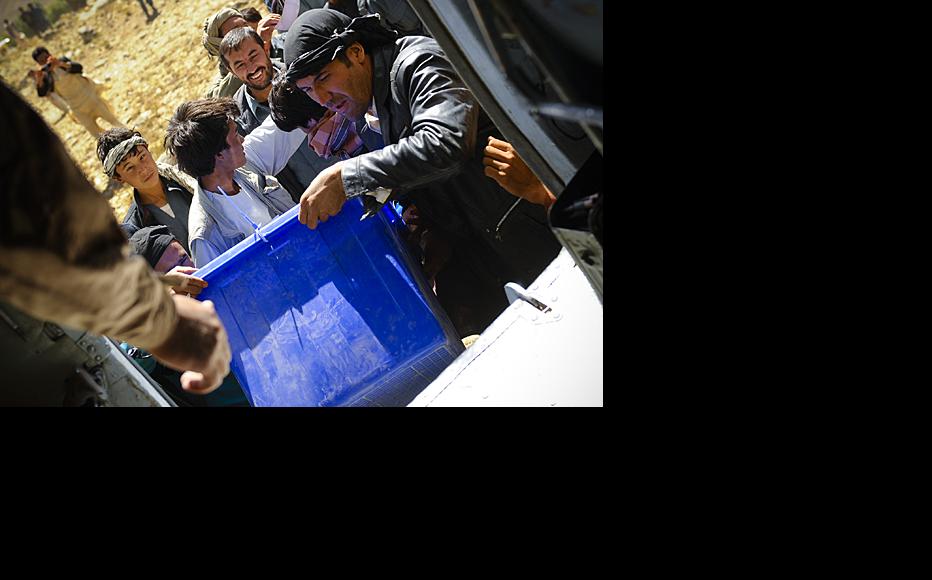 Afghans load ballot boxes into a helicopter in Jaghatu, Afghanistan. (Photo: US Air Force Staff Sergeant Joseph Swafford/ISAF)
The link has been copied

Insurgent violence and election fraud were reported in most parts of Helmand province, one of the most troubled regions of Afghanistan, as residents went to the polls on September 18.

Although fears of large-scale violence in Helmand did not materialise and provincial officials hailed the day as a success, voter turnout was low as many stayed at home because of Taleban threats of violence.

In Marja, one of the most volatile areas of Helmand located west of the provincial centre Lashkar Gah, Taleban forces carried out two separate attacks on the Loya Char-Rahi area.

During the election day attacks, an employee of Marja’s local government office who did not want to be named told IWPR, “I am only one kilometre away from Loya Char-Rahi and this is the second time I’ve witnessed attacks from very close by. There is some rocket-propelled grenade fire as well. This is a very serious attack; I haven’t witnessed one like it in the last two months.”

The fighting in the area had kept people at home, he said.

“Since this morning it’s been as if every living soul has left Marja. The Taleban threatened the people with negative campaigns, and no one is going to participate in the elections,” he added.

Afghan officials confirmed that there had been attacks in Marja, but said that they had not been as serious as reported.

An Afghan National Army, ANA, lieutenant colonel, who spoke on condition of anonymity, said, “In Gereshk, Sangin, Musa Kala and Marja a lot of attacks were carried out on our security posts, but with God’s grace, there were no casualties. None of our solders suffered and the elections were conducted in a very good way.”

Security was tight in the Lashkar Gah, where few vehicles or passers-by were visible on the streets and helicopters could be seen flying overhead.

Sha Babu, an elderly woman standing in front of the local Red Crescent office, said that she was glad to have a chance to take part in the election.

The central electoral body said that 4.3 million people, or 47 per cent of registered voters, took part in electing the 249 members of the lower house of parliament. Final results are not expected before the end of October.

Ahead of the election, Helmand governor Mohammad Gulab Mangal told reporters that security concerns meant that voting was called off in six of the province’s 13 districts – Washir, Baghran, Dishu and Khanashin.

Mangal said although six polling stations in Khanashin, in southern Helmand, had been secured by his forces, election officials had taken a decision to close them.

Khanashin’s district government chief Rafihullah Baluch complained that this decision had deprived voters of their right to take part.

“We took security measures, but thousands of our people were deprived of their voting rights,” he said. “We have candidates, but we were unable to vote for them. Whoever did this, it wasn’t a good thing.”

Toryalai, the chief election monitor for Chah Anjir, a village in Nad Ali district west of Lashkar Gah, told IWPR that only 250 people cast their votes during the day.

“In Chah Anjir, people didn’t dare vote,” he said. “They were afraid of the Taleban.”

Taleban sources told the media that they had carried out 239 attacks across the country and achieved their goal of obstructing the election in many areas.

Qari Yusuf Ahmadi, a spokesman for the insurgents, accused the media of deliberately ignoring their attacks. Some reporters acknowledged that the Afghan government had instructed the media to avoid reporting security problems on election day.

Across Helmand, the district of Nawa-i Barakzai to the south of Lashkar Gah was the only place where there were no reports of attacks.

“It’s surprising that not even one bullet was fired in Nawa district and that the election took place,” he said. “The Americans took good security measures, and people cooperated with the government, so the Taleban weren’t able to fire a single shot.”

At polling stations set aside for women, voted began at nine in the morning, two hours later than planned.

The manager of one polling station, speaking on condition of anonymity, said she blamed logistical staff from the electoral commission for not bringing the ballot boxes on time.

“I am a woman, and despite the bad situation I have come to work at seven o’clock, but it’s now eight o’clock and they haven’t brought me the boxes. Women are calling us to tell us to hurry up. They’re saying, ‘the situation isn’t good, we’re going home’. Is this my problem or the commission’s?”

Qudratullah Naqshbandi, head of the electoral commission’s office in Helmand, accepted responsibility for some delays, adding, “I admit that some locations opened late, and this was the commissions’ fault. The problem was transport, which meant they weren’t able to do their job on time.”

The National Security Directorate office in Helmand said it had seized 200 fake voting cards from female voters, but had yet to make any arrests in the case. Dawood Ahmadi, spokesman for the provincial governor, added that one woman had been arrested with a list of the numbers of 500 voting cards.

Governor Mangal told reporters, “Although we set up an active commission to stop fraud, we still identified nearly 30 cases of fraud, most of them relating to the use of fake voting cards.”

A local police officer who declined to be named said that there had been many arrests for fraud, but he alleged that individuals with powerful connections had been released.

Although voters elsewhere in Afghanistan were reportedly angry about the quality of the ink used to mark their fingers to stop people voting more than once, in Helmand they said they were happy that they could clean the ink off and thus avoid the risk of having their fingers amputated by the Taleban.

Even so, many people in Marja and Nad Ali said the prospect of having their fingers stained had deterred them from voting.

“If the commission wasn’t colouring voters’ fingers, and the Taleban were not punishing those with ink on their fingers, thousands more people could vote,” Nad Ali resident Shaker Zabihullah said. “We don’t commit [election] fraud… Villagers are simple people; they were only using the one vote.”

Despite the problems, parliamentary candidates like Masoud Nurzai saw election day as a success.

Nurzai said he was happy with the process, and early results from the electoral commission had placed him in the lead.

“I came first in Lashkar Gah and Nad Ali,” he said. “I am the winner.”

Mohammad Ilyas Dayee is an IWPR reporter in Helmand.