A member of the media regulation body outlines successes and challenges.

A member of the media regulation body outlines successes and challenges. 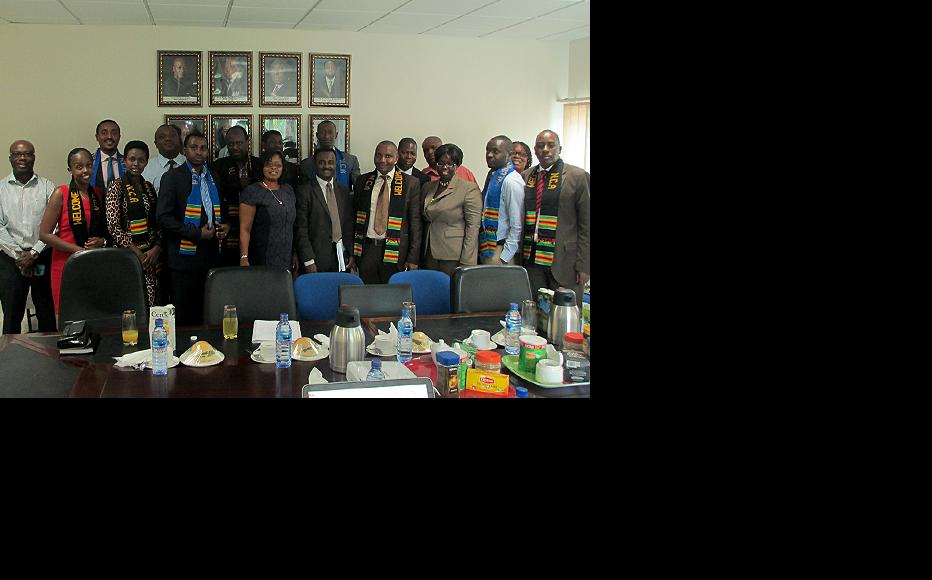 Rwanda Media Commission members with their counterparts in Ghana. (Photo: IWPR)
The link has been copied

A year and a half after the Rwanda Media Commission (RMC) was set up, IWPR reporter Jean Pierre Niyitanga asked commission member Prince Bahati to talk about its work to date.

Established in August 2013 as part of a package of media reforms, the RMC is a self-regulatory body responsible for protecting journalists, regulating their conduct, monitoring the way the media operate, and advocating for media freedom.

What have you achieved since the RMC was set up?

We have come almost from nothing, and we have built a system that is working actively. The first thing was to put in place the RMC with its secretariat and board.

We have been dealing with complaints from both the public and journalists. We have handled more than 60 complaints, and nobody has questioned the decisions taken by RMC commissioners. We have tools that help us on a daily basis like a strategic plan, a communications strategy, a complaint-handling manual, and well-audited finances.

Your website is quite active, and you seems to be processing complaints quite quickly. What is the most interesting case you have dealt with so far?

We have handled various cases involving ordinary citizens as well as the authorities complaining about media, journalists accusing journalists, media houses against media houses, and individuals accusing other individuals of using the media to tarnish their reputations.

One interesting case is an online publication that ran a story alleging that two men were sleeping with older women for money, a phenomenon locally known as “abapfubuzi”. Their pictures were published as well. Such stories with neither evidence nor facts damage the reputations of those people.

When we sat to examine that case, I realised that sometimes the media can go beyond the remits of media freedom, and that this can destabilise society. We asked for a one-month suspension of that publication. I am happy and proud that after we dealt with the case, both parties accepted the ruling.

What are the challenges your organisation faces delivering on its mandate?

The RMC is the only institution that can give out press cards, but we aren’t seeing journalists coming to ask for press cards as we’d wish. This leads to journalists not “owning” the RMC.

Another challenge is who does what in terms of regulation, because there are two regulators in this country. Apart from the RMC, there is the Rwanda Utility and Regulatory Agency (RURA) that regulates broadcast frequencies. We would like to see RURA dealing with technical matters, while all things that have to do with content should be our responsibility.

Another challenge is going to be finance. Partners including IWPR are helping us, but we want to see media houses and journalists contributing to the RMC’s financial sustainability.

The RMC secretariat and some of the commissioners recently went on a study tour to Ghana, to meet and learn from the National Media Commission. What did you learn there?

The study tour in Ghana was fantastic because the National Media Commission of Ghana has a huge amount of experience, as it has been there since 1993.

We learned that media can’t be separated off from other sectors. Second, we learned that using public funds does not infringe on independence. Some people here have been saying that we do not need money from the government, because we might not be independent. But from the Ghanaian experience, we realised that everything depends on the laws, so that it is clear who does what.

Last but not least, there is the regional integration of media self-regulation. The National Media Commission of Ghana is integrated within West Africa. This gives it power; it can impose itself because it is not working alone. From these lessons, we decided to continue forging relationships with other countries, and empower our secretariat to conduct media monitoring and managing funds.

What will you be able to replicate here in Rwanda?

We can write confidently to the government of Rwanda and tell it that the job we are doing needs to be supported by government. We now know that journalism is a profitable profession. Journalist should be well paid so they can take care their families. Also, with full independence, media can contribute to the advancement of democracy. All these lessons can be replicated in Rwanda.

There is an ongoing debate about media regulation and self-regulation in Rwanda. There is an order from the prime minister to better define the role and responsibilities of RURA and its relationship with the RMC. What is your view of the draft order?

Our position is that RURA deals with technical things, and content should be regulated by RMC. All over the world, content is the core work, the heart, the golden chain of any self-regulating body. We are not in opposition to RURA or the government; we are just saying that to have media self-regulation work well, you need us to do our work because it lies within our mandate – through the law, through policy and through media reform.

We saw the draft and we were not happy with it. We offered our comments, and we are still waiting to see what has been done. We are trying to be positive about the process.

One of the missions of the RMC is to advocate for freedom of expression and freedom of the media. Has media freedom improved in Rwanda since the media reform legislation was passed in 2013?

We can say that it is better than yesterday, because setting up the self-regulation body is in itself an indicator of media freedom. The fact that there is no invisible hand or the shadow of government in our work is a sign of freedom. The proliferation of media houses is another sign of freedom because it encourages diversity of ideas.

However, we will continue fighting, because freedom is not given freely, and every day brings new realities with it.

At the request of the Government of Rwanda, IWPR has been working on media reform in the country since 2010. Our programme activities have played provided technical support to the Government of Rwanda in range of areas, including the revision of six major laws on media freedoms – subsequently passed by the Rwandan parliament; the creation of a new system of independent media and press regulation; the government’s decision to close the Ministry of Information; the launch of RBA’s transformation from state to public-service status; and a wide range of training and educational activities to build the skills of Rwandan journalists and enhance the media’s professional capacity.

Rwanda
Media development
Connect with us