Participants encouraged to write in-depth pieces for their own media outlets.

Participants encouraged to write in-depth pieces for their own media outlets. 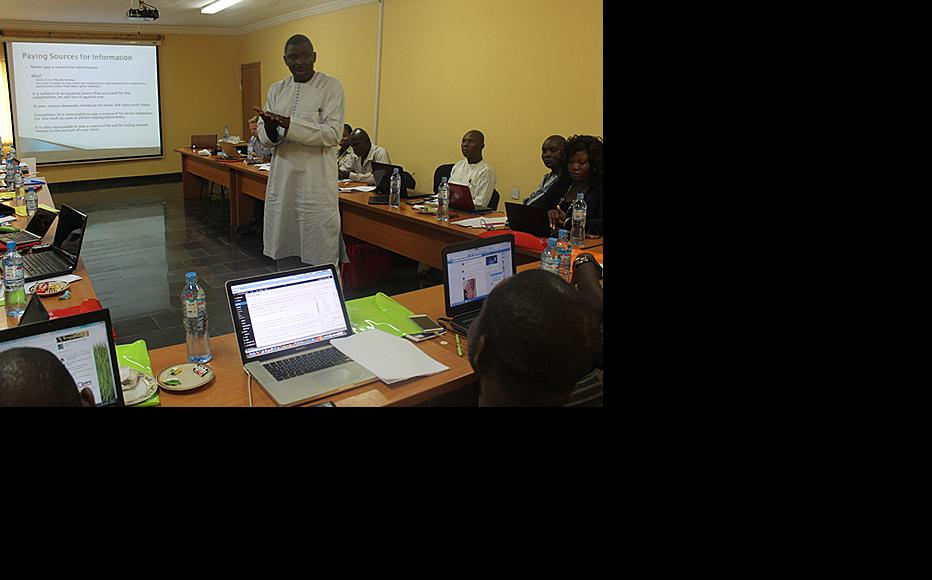 IWPR training session in Nigeria lead by Dayo Aiyetan. (Photo: IWPR)
The link has been copied

Journalists in Nigeria and Sierra Leone and Nigeria say they plan to apply newly-acquired investigative reporting techniques to uncover wrongdoing in each country.

In all, 36 participants attended training sessions held in June and July and conducted by IWPR in partnership with the Campaign for Good Governance in Freetown, Sierra Leone, and the CLEEN Foundation in Abuja, Nigeria.

“There are a lot of issues in my country that need to be addressed,” one of the Sierra Leonean reporters said afterwards, “but only a few journalists are reporting these issues, and the impact has not been felt.”

The focus of both courses was on best practice for looking into abuses in both public and private sectors, with an emphasis on high level corruption. Participants learned about how to define and identify corruption, interview sources, analyse date, uphold ethical standards, and exercise security in a hostile environment.

The programmes were led by trainers Gérard Guèdègbé in Sierra Leone and Dayo Aiyetan in Nigeria.

“I enjoyed how the lecturers balanced theoretical training with the practical aspect of Nigerian journalism,” he said after the training. “You can’t find such knowledge in journalism schools in Nigeria.”

The 2011 Freedom of Information Act in Nigeria guarantees the right to public information. Sierra Leone’s parliament passed a Right to Access Information Bill in October 2013 but the law has yet to come into force.

Following the training sessions, IWPR selected 19 of the participants – 11 from the Nigeria course and eight from Sierra Leone – to undertake a research exercise in preparation for producing in-depth investigative reports around the themes of corruption and governance. The topics will include conflict in northern Nigeria, the war on drugs, and government contracts with the private sector. The reports will be published by the news outlets for which the journalists work.

Edegbe Odemwingie said he was already applying new methods in his day-to-day reporting for the Leadership newspaper in Abuja.

“Investigative skills gained from the training have added great news value to my reports,” he said. “It stands my reports out from the routine reports.”

Other trainees agreed that IWPR’s programme offered a valuable grounding in how to hold officialdom to account.

“There are myriad avenues for seeking useful information for good journalistic practice, which in turn will make me live up to the societal expectation of a watchdog,” Makinde Alfred, who works for Radio Nigeria, said.

Prior to the formal training process, IWPR held roundtable discussions with 20 editors in Sierra Leone and Nigeria to discuss political pressures on the media, ways of improving the quality of news coverage, journalistic ethics and standards, and the environment for investigative journalism.

One editor in Sierra Leone pointed out that standards differed markedly between newsrooms, and that in some cases, breaching the rules was seen as acceptable if it meant a reporter could get a story. This led to a long discussion about when "exceptional methods" might be acceptable in investigative reporting.

“Most of us are the most senior people in our institutions and we are having this kind of discussion, so it goes to show that we need a lot of training and more training at the senior level," another editor said.

The training and debates are part of two larger projects, Access Nigeria and Access Sierra Leone, which focus on investigative journalism relating to governance, corruption and transnational organised crime. IWPR’s activities were funded by Partners for Democratic Change under a grant from the US Department of State’s Bureau of International Narcotics and Law Enforcement Affairs.