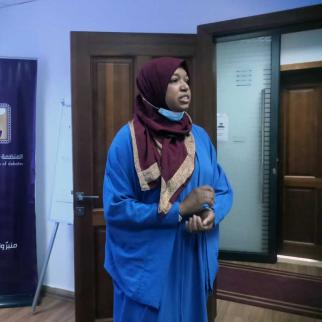 Amal Alnani is the founder of I am a Libyan Woman and My Son is a Foreigner (ILSF), an organisation campaigning for the rights of women and young people disadvantaged by a loophole in Libya’s citizenship law. © Amal Alnani 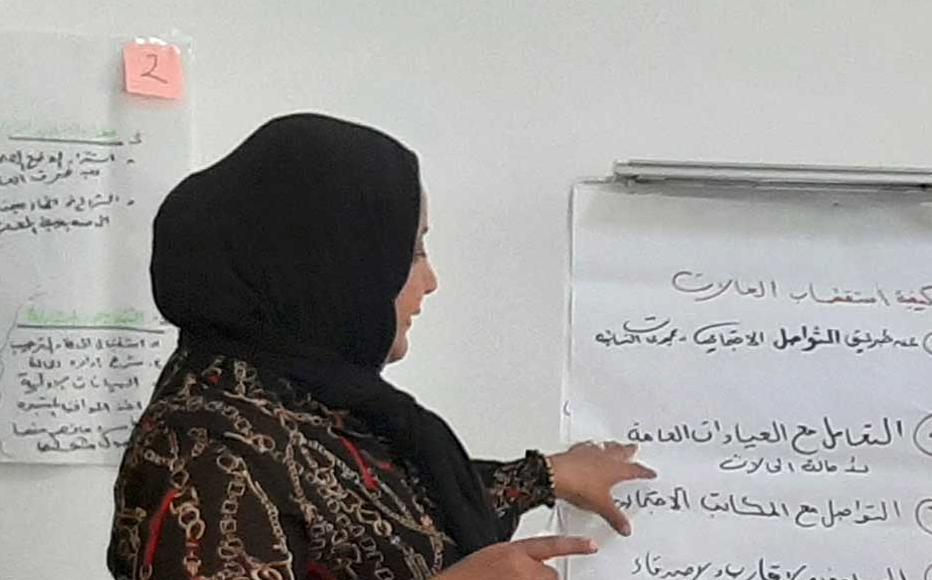 Longtime IWPR partner Libyan Organisation for Development hosts a training for 30 women social workers in Benghazi. © LoD
The link has been copied

Libyan officials have pledged to legislate to protect women’s rights during times of national crises, following a campaign by an IWPR partner NGO.

The Libyan Organisation for Development (LoD) launched a rapid response programme in February 2021 to meet the needs of women negatively impacted by the pandemic. Their research found that unemployed women and divorcees, along with their children, were the worst affected by lockdown in terms of their economic and mental wellbeing.

The HopeMakers project trained nearly 60 female social workers in how to handle sensitive cases, particularly domestic abuse, that had increased due to Covid-19. They went on to provide one-to-one psychosocial support sessions to more than 200 women, mostly isolated or displaced mothers, widows and divorcees.

Based on this experience, LoD - an NGO based in Benghazi with branches across eastern Libya - held two virtual conferences on the systematic inclusion of mental health and psychosocial support in national legislation and disaster planning.

The events were attended by lawmakers, senior officials from the justice and social affairs departments as well as a member of the constitutional drafting assembly, the chamber responsible for writing a new Libyan constitution. The body hopes that a referendum on the new constitution can follow the December 2021 parliamentary elections.

Constitutional assembly member Ibtissam Ibbaheh said that the event had given her a crucial insight into the unique challenges women faced in these circumstances, and how this in turn affected the wider society.

“Libya will benefit from the existence of national legislation to protect women during crises and pandemics,” she said, adding that this needed to be monitored by oversight bodies to guarantee its application.

“Some social aspects and the depth of the problems caused by the pandemic may not be obvious, but attending meetings that shed light on these problems and the psychosocial impact on women - and its reflection on society - gave us a clear idea on women’s issues and made us seriously look at how to address them.”

“In Libya, there is a typical image of the woman that is embedded in the masculine collective opinion and across the generations,” Ibbaheh continued. “So women put limits on themselves and supress their own freedom of expression…these feelings of weakness and helplessness prevent women from meeting their own needs and taking the initiative to overcome challenges, either personal or social.”

One social worker in eastern Libya who received training as part of the HopeMakers project agreed that it was hard for women to talk openly about their personal concerns, especially around gender-based violence.

“Mental health is still stigmatised [in Libya] as is the case in many other countries around the world,” she said, adding that the psychological pressures on women had massively increased during the pandemic.

“Many women were at home with their husbands and children for 24 hours a day for long periods,” she said. “This affected their mental health as they were responsible for providing them with food and responding to the family’s needs continuously. So both their psychological and physical health deteriorated.”

The HopeMakers programme, supported by IWPR and funded by the Uk government through its conflict, stability and security fund, had begun by circulating an online questionnaire to ask about their situation, challenges, and the extent of the impact of the pandemic on them.

“Trust was then established between the social workers and the women through an exchange of phone calls where we provided psychosocial support,” the social worker explained. “In some cases, we also provided in-person sessions.”

She recalled one case she dealt with, of a widow whose in-laws were not allowing her to leave the house and were denying her and her children their inheritance rights.

“When she learned that we provide psycho-social support, she reached out to us and told us about her problems,” the social worker continued. “We provided guidance, and then she visited us in the office and brought the necessary documents to provide a legacy for her children. We also linked her with a lawyer who helped her get the necessary documents related to the death of her husband as well as a notary to draft a special authorisation that she was the person responsible for raising the children.”

Months later, the social worker continued, “She is safe and living a stable life with her children.”

Another client, a 43-year-old woman from Benghazi, said that she had never heard of psycho-social support before meeting her social worker.

“She helped me to avoid giving in to my problems by having more contact with other people; this helped me reduce my mental stress,” the woman said. “She also got me involved me in vital sessions such as cooking and making sweets that can be a source of income for me and my family.

“I benefited on several levels: psychologically, economically and socially,” she continued. “My mindset changed and I began to manage tensions with my in-laws and work making homemade cakes and selling them. This helped me to improve my family’s income and solve our previous problems.”