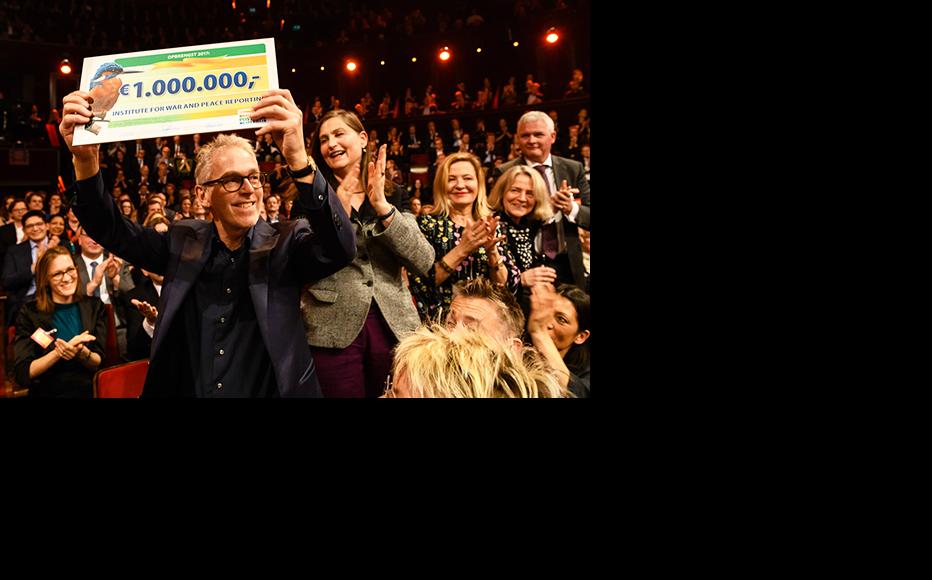 Derk Sauer, Chairman of IWPR's Netherlands board with the awarded cheque. (Photo courtesy of Dutch Postcode Lottery)
The link has been copied

Amsterdam, 16 February – The Institute for War & Peace Reporting-Netherlands (IWPR-NL) is pleased to have received a contribution of €1 million from the Dutch Postcode Lottery to support global efforts to strengthen local voices of journalists and civic activists in challenging environments around the world.

Announced last night at the Goed Geld Gala, held at the Royal Theatre Carré in central Amsterdam, the gift will help IWPR fight for freedom of expression and support local voices in areas of conflict, crisis and change.

Receiving the award, IWPR-NL chair Derk Sauer – the well-known Dutch publisher and media owner – said, ‘We are extremely pleased with this support, not only financial but above all moral. Press freedom is under pressure more than ever, and the efforts of organizations such as IWPR are vital. Local voices are essential in the new information landscape, and Lottery funding will help us give voice and drive change in some of the most challenging environments around the world.’

IWPR supports local voices by training and supporting reporters and activists to tell their stories in effective, objective and secure ways, and helping ensure they reach the widest possible audiences. IWPR strives for a world in which the voice of every citizen is heard, the rights of people are recognized and protected, and communities have the opportunity to build stable and equal societies.

IWPR maintains innovative frontline programming in more than 30 countries in Africa, Asia, Latin America, the Middle East and Europe. Examples include training and supporting investigative reporting to expose corruption in countries from Kenya and Nigeria to Afghanistan and Sri Lanka. A major social media initiative in Iraq brings local democratic voices to a mass audience, and supports and trains local activists, such as Manar Al-Zybaidi, an Iraqi woman driving an education campaign to reduce persecution and raise direct support from Iraqi’s beleaguered gypsy communities. With support from the Dutch MFA, IWPR has for many years assisted independent journalists, women activists and women’s support centres operating in extreme conditions inside the country.

IWPR-NL is a member of the IWPR International Network, with bases in London and Washington, DC. Lottery funding will help IWPR raise public awareness within the Netherlands of the importance of freedom of expression and IWPR’s own work, expand its Dutch and European networks of support, and contribute to new and existing frontline programming around the world, such as digital security, women’s voices and documentary filmmaking. Previously, IWPR for many years maintained a base in The Hague covering war crimes tribunals.

Anthony Borden, Executive Director and founder of IWPR, noted, ‘The Netherlands is a leading contributor to the causes of human rights and freedom of expression. We are delighted by the contribution of the Postcode Lottery and the partnership with our Dutch colleagues, and look forward to expanding our support to local voices around the globe.’

The Dutch Postcode Lottery supports charities in the fields of people and nature, at home and abroad. This year €357 million was raised for charity, the highest figure ever. With this money, the 2.9 million participants in the Lottery have empowered the work of 112 charities this year. Since 1989, the Postcode Lottery has donated more than €5 billion to charitable causes.

Media development
Connect with us