IWPR supports partner NGOs in an innovative range of responses to the pandemic.

IWPR supports partner NGOs in an innovative range of responses to the pandemic. 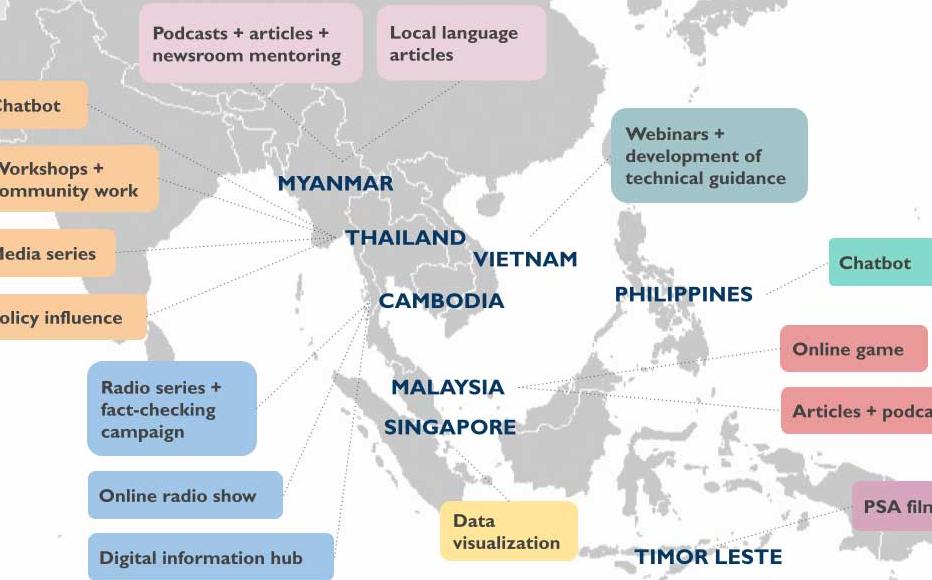 SEA project info sheet © IWPR
The link has been copied

In Malaysia, a game that can be played by children as young as eight has taught basic fact-checking skills on fake news about Covid-19. In Myanmar, a news outlet has produced over 400 articles in Shan, Burmese, and English to educate people on the health crisis and vaccination – all while evading the state’s crackdown on media. In Cambodia, data visualisation has been made available to reporters and citizen journalists alike to help them make sense of Covid-19 numbers.

These are some of the quick-response projects IWPR Southeast Asia has supported as part of its work combating disinformation amid the pandemic.

“There are no geographical boundaries, not even language boundaries, to misinformation and disinformation. It is a common issue of public concern,” said Johanna Son of Reporting Asean: Voice and Views from Within. The project surveyed nine countries in the region, fidning that 57 per cent of respondents relied on news outlets for information about the virus, despite often finding it hard to distinguish between factual content and misinformation.

Many of the projects supported by IWPR thus focused on making accurate information more accessible.

Factual, a project launched from the Philippines, made use of a chatbot that users could interact with to ask questions related to Covid-19.

The Thibi project promoted data visualisation templates, or what they described as “easy-to-cook recipes” for charts and scroll maps to help journalists produce effective and attractive data-driven reports without stressing about the technicalities.

“We want to make data look nice,” said Thibi’s Yang Naung Oak. “We don't want people to shun data because of the number of rows and columns.”

In Cambodia, two organisations – the Cambodian Centre for Independent Media (CCIM) and the Women’s Media Centre (WMC) – produced radio shows on the pandemic.

“We did three live radio shows as well as fact-checked articles on Covid-19,” said WMC’s Chanthol Oung, adding that the broadcasts reached 17 of Cambodia’s 25 provinces.

“Through our radio program, True or Not, we provided reliable information on Covid-19. It also became a platform for citizens to check the information they received whether it is true or fake,” added CCIM’s Sothoeuth Ith.

“We compiled and disseminated data and resources and equipped relevant stakeholders and citizens with reliable, up-to-date and complete data and information,” said ODC’s Julia Puig.

In Vietnam, a Facebook page on pandemic-related disinformation was set up by a department of the Ho Chi Minh National Academy of Politics. The page had 1,000 posts that included safety tips for journalists and hosted seven webinars with stakeholders such as leading medical experts, media owner, and journalists, which led to the production of a guide for best practice in both Vietnamese and English.

Fortify Rights, an advocacy group based in Thailand, documented and countered Covid-19 related attacks on refugees and migrants. As a result of its campaigning, Facebook removed 12 xenophobic pages fanning anti-migrant sentiment on its platform.

In Malaysia, the online game Choices I Make -- available in English, Malay, Tamil, and Chinese – educated people on the potential consequences of disinformation on individuals and on society as a whole.

“The characters and storylines were crafted to cover various ethnic groups, age groups and scenarios relevant to Malaysia’s handling of the pandemic,” said Hazwany Jamaluddin of Malaysia Information Literacy Education. “We want to enable them to navigate the infodemic by better evaluating information, especially prior to sharing it.”

In Myanmar, a small group of journalists and social media specialists banded together to create True News, a Facebook group linked to three pages with the aim of fighting back against misinformation and disinformation about Covid-19.

“The military coup that happened in Myanmar targeted journalists and some of our members were detained by the military and some are still in hiding for safety reasons. But we tried as much as we can to contribute reliable and correct information,” said Phone Myint Min, adding that they had to shift to an SMS platform when the junta started restricting internet access.

IWPR Asia programme coordinator Rorie Fajardo-Jarilla said that the outpouring of information around Covid-19 had been unprecedented and demanded an urgent, concerted response.

“We are getting more and more of our audiences involved,” she said. “By understanding better how our Southeast Asian audiences consume information, and by equipping them against disinformation and misinformation, I can also say that our work has also been unprecedented.”