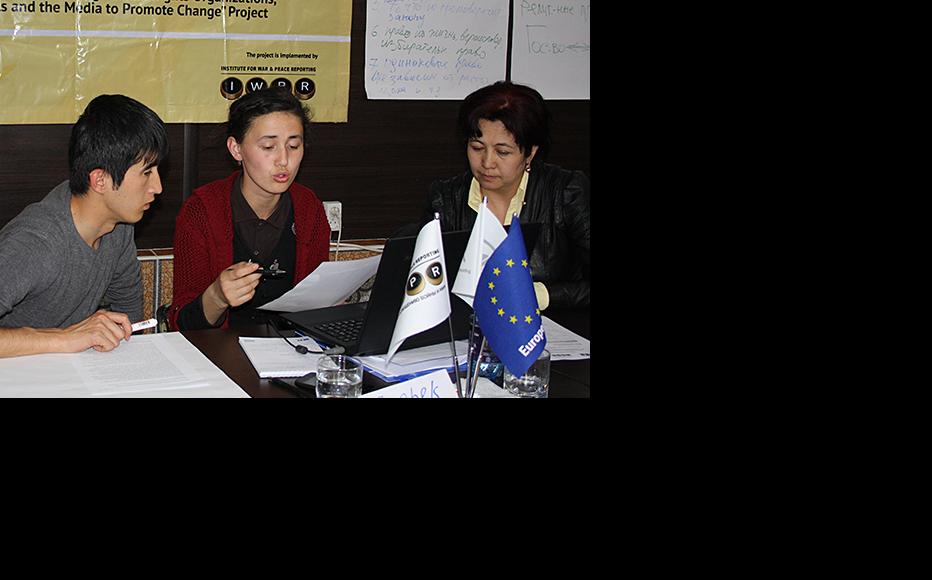 IWPR training event in Osh, April 2015. (Photo: IWPR)
The link has been copied

"Journalists shouldn’t be afraid to cover human rights issues,” says Nurgul Sharshembieva, head of the Journalists’ House, an NGO in Kyrgyzstan. “When people talk about human rights violations, we think it has to be something major on a large scale. But on closer examination, violations occur everywhere, and we have to make the authorities aware of them if their performance on the ground is to improve.”

Sharshembieva was speaking after IWPR ran a cycle of training workshops for journalists covering human rights issues. The three events took place in the capital Bishkek on April 24 and 25, in the southern city of Osh on April 17-18, and before that in the northeastern town of Karakol on April 10-11, and drew in journalists from nearby parts of the country.

Some participants were relative newcomers to journalism, while others were more experienced staffers from the likes of NTS and Yntymak television, RFE/RL’s Kyrgyz-language service, local broadcasters and newspapers, and the AKIpress, VB.kg and Ozadagon news agencies.

The trainees – more than 50 in all – were given basic information about international and nation human rights standards, and encouraged to think about why it was important to report on abuses, the best way of using individual cases to reflect general patterns, and potential pitfalls like losing track of objectivity and the continuing self-censorship mindset, which is especially prevalent in areas outside the capital where political control of the media is stronger.

Later in the sessions, the trainees worked on joint stories to put theory into practice, and the strengths and weaknesses of the material the produced was then discussed as a group.

The training was led by Abdumomun Mamaraimov, editor of the VOF.kg site which specialises in human rights pieces.

These three workshops followed a series of IWPR events in February and March at which human rights defenders and media workers had a chance to meet and discuss how they could interact more productively. Although they come from different sectors, journalists and rights groups have a lot in common, but often contact between them is limited. Those three training sessions were aimed at improving the quality of journalists and their materials in covering human rights issues.

"We’re hope that this will allow us to give human rights journalism a boost,” IWPR Central Asia Director Abakhon Sultonnazarov said. “When it comes to serving the needs of society, protecting the public’s interests and restorative justice, NGOs and journalists have some way to go in terms of quality and effectiveness. One problem can be when human rights coverage comes from the wrong angle, or when these issues are simply ignored.”

This work was carried out as part of two IWPR programmes – Strengthening Capacities, Bridging Divides in Central Asia, funded by the foreign ministry of Norway, and Creating a Culture of Investigative Journalism for Furthering Democratic Reform: Linking Human Rights Organisations, Government and Media, funded by the European Union.

Kyrgyzstan
Human rights
Connect with us