Central Asia: The Power of Conflict and Protest

Central Asia: The Power of Conflict and Protest 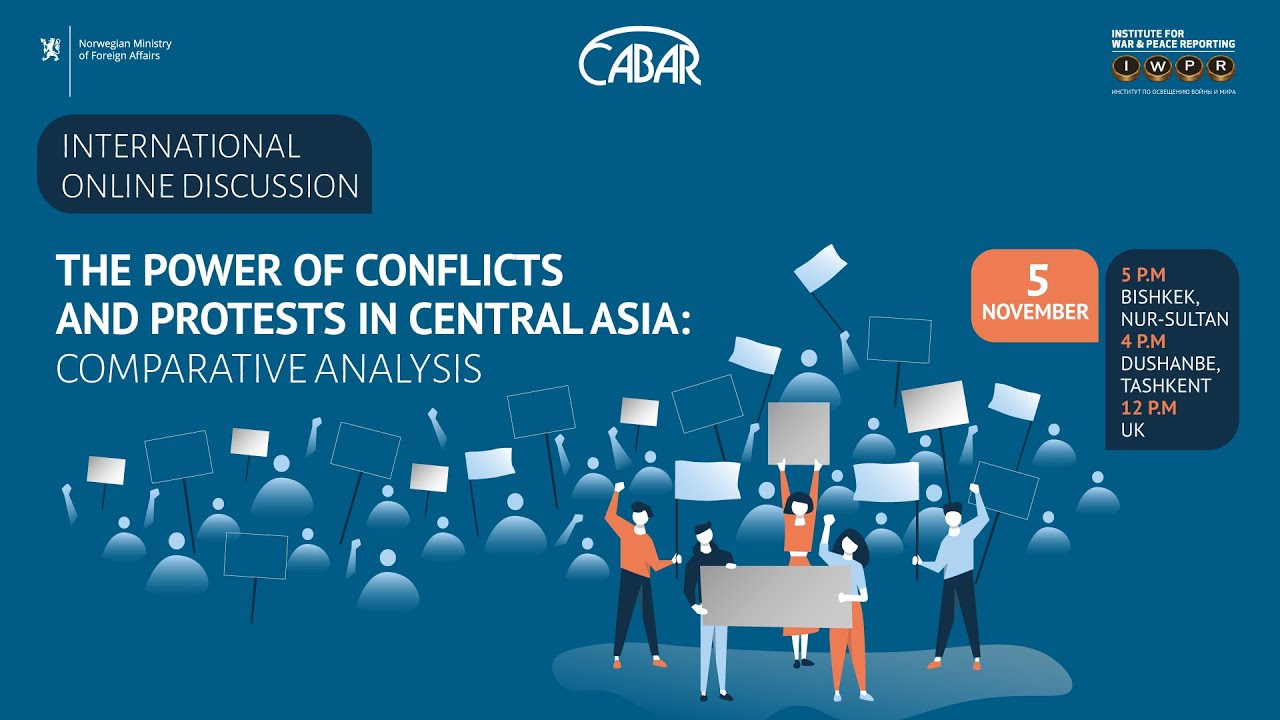 Central Asia: The Power of Conflict and Protest
The link has been copied

The ongoing political turmoil in Kyrgyzstan was the focus for an expert discussion hosted by IWPR Central Asia and its regional CABAR.asia analytical platform.

The panel, drawn from analysts and academics in Europe, Central Asia and the US, also looked further afield to the regional consequences of the Nagorny Karabkah conflict and the continuing uprising in Belarus.

Speakers at the November 5 event emphasised that protests which erupted following Kyrgyzstan’s disputed election had been fuelled by citizens concerned about hard-won constitutional rights.

“The way electoral institutions are designed is really at the heart of the protracted political issues Kyrgyzstan is having right now,” said Colleen Wood, a PhD candidate in the Department of Political Science at Columbia University. “Kyrgyzstan’s constitution maintains a very careful balance of power between the president and the parliament which is manifested in the rules of how the president should conduct his or her duties, how the elections are run, how power is gained in the parliament.”

But the fact the threshold was raised from five to seven per cent - with the goal of encouraging stronger political parties as a better balance to the president – meant that the outcome of the most recent elections had proved frustrating.

Wood noted that although 16 parties ran, many of them with a strong following, only four ended up crossing the seven per cent threshold.

“And the frustration with this perception of ‘business-as-usual’, no real check on the government’s authority and [former president Sooronbay] Jeenbekov’s power is what drew people out to the streets on the day after the election”.

Given that “citizens hold the constitution very dearly, that having gone through multiple revolutions, having survived and pushed through so much political uncertainty and so many crises, that people do see the rules of the game as holding their leaders accountable”.

She concluded, “Kyrgyzstan is at a crossroads right now, in that leadership is trying to change the rules of the game.”

Fabio Indeo, an analyst on Central Asia issues at Observatory of Central Asia and Caspian, noted that Kyrgyzstan’s third revolution demonstrated the strength of its civil society as well as its relatively liberal politics.

“However, Kyrgyzstan is affected by a condition of political instability which affects the relationship between these countries with external actors, mainly Russia and China,” he said, adding, “For China and Russia to preserve the status quo is one of the main goals to achieve, because change in political leadership could spread uncertainty.”

He said that if political or social instability spread through Central Asia “the strategic, energy, political and security interest of China and Russia will be affected, especially the regional security architecture, which is based on Russia as a security provider”. China was also trying to increase its role in the region to protect the Belt and Road corridor, he continuing, noting that this very sensitive situation would characterise the coming months.

Jennifer Murtazashvili, associate professor at the University of Pittsburgh’s graduate school of public and international affairs, stressed a global crisis of governance.

“Legitimacy and democracy are closely intertwined. They’re not necessary and sufficient conditions to produce one another - they are closely related - but they all are based on trust. As someone who works on governance in the region, legitimacy is really key to maintaining stability and security and responding to citizens’ needs.

“In Kyrgyzstan, it seems that for many, many years, the government’s ability to provide public services really collapsed,” she continued, noting surveys carried out a decade ago that put the country’s educational levels as the lowest in the world.

“The government became a sort of a piggy bank for officials. It became a repository of resources for officials who knew they would not be in power for very long.”

She too stressed the strength of civil society in Kyrgyzstan, as people increasingly understood that they could not rely on the state to provide public services. But this resilience could have wider consequences.

“When people perceive that the government’s behaving in a predatory manner, when they’re taking their property without compensation, this becomes a source of enormous alienation. And that is when you go from just corruption to alienation. There are enormous risks for governments when these kinds of things occur.”

Akram Umarov, project coordinator of the Development Strategy Center, said that Central Asia should learn from the lessons of conflict in the South Caucasus.

“The experience of the South Caucasus clearly shows that all attempts to freeze the settlement of complex regional issues are fraught with periodic aggravation and further complication of the prospects for a diplomatic solution,” he said.

“The parties have not been able to normalize the Nagorny Karabakh conflict for over 30 years, despite the presence of the international mediation mechanism of the Minsk Group, the adoption of a number of important Security Council resolutions, which have not been largely implemented in practice. As a result of the lack of progress in the peace negotiations, the parties at times make attempts by military means to reverse the status quo and pedal the settlement of the conflict situation in their favour.”

Central Asia also faced a number of enduring issues such as disputes over borders, water resources, interethnic tensions and environmental challenges, he continued. Thus far, it had been down to the actions of autocratic leaders to keep such conflicts in check.

“Despite the centuries-old bonds of friendship and coexistence in the common region, the presence of a huge range of cultural and humanitarian ties, the atmosphere of interaction in the region and the willingness to settle complex interstate issues were largely determined by the strong-willed decisions of national leaders over the past 29 years of the independent development of states.”

Flemming Splidsboel Hansen, a senior researcher at the Danish Institute for International Studies, said that regional influences should not be underestimated.

She noted that “we used to refer to Kyrgyzstan as the Switzerland of Central Asia. Using the same analogy, we may speak about Belarus as North Korea of Europe”.

Developing this theme, she stressed that “neighbourhoods matter… it’s very difficult to be a democratic or semi-democratic state in an area surrounded by authoritarian governments. It’s also very difficult, as Belarus has somewhat managed, to remain a dictatorship even when almost surrounded by EU member states”.

Giving Voice, Driving Change - from the Borderland to the Steppes
Kyrgyzstan
Crisis, Elections, Protests
Connect with us