Young Iraqi woman tells of how she was enlisted by insurgents to carry out attack in marketplace.

Young Iraqi woman tells of how she was enlisted by insurgents to carry out attack in marketplace. 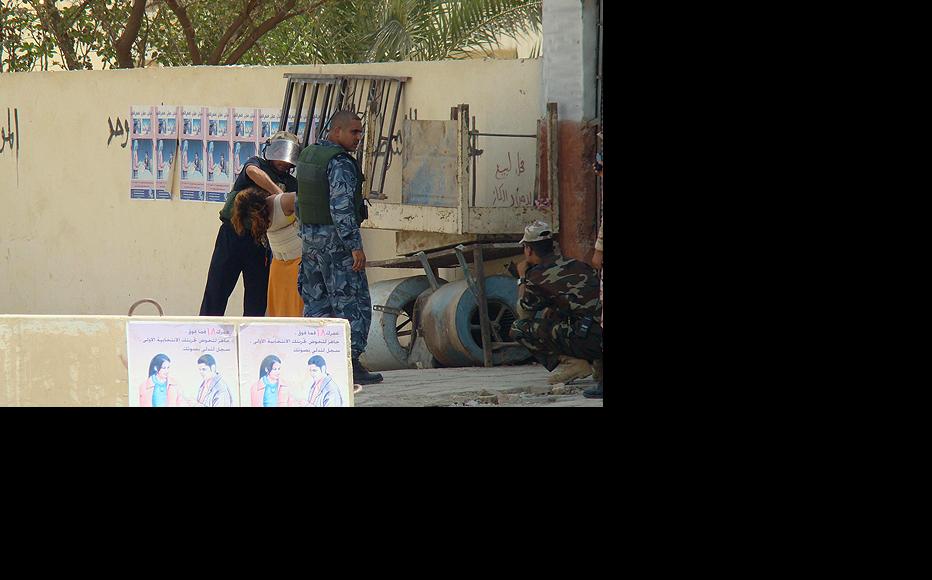 Iraqi security forces in Diyala re-enact the 2008 capture of a female suicide bomber for the benefit of the press. (Photo: Ali Mohammed)
The link has been copied

Before sending her off with a suicide bomb strapped to her waist, Rania al-Anbaki’s husband made a wish.

“You’ll be a martyr and we’ll meet in heaven. I hope you’ll choose me,” she recalls him saying.

Interviewed in a police station two years later, Anbaki said she did indeed meet her husband again – but in prison rather than paradise.

“He was arrested in a raid on an al-Qaeda cell,” she said. “He’d been carrying a fake identity card.”

At the time of their brief reunion, Anbaki had already been in custody for two months. She was stopped by security forces in Baquba, the capital of Diyala province, before the device attached to her body could be detonated.

In her late twenties, she is serving a seven-year prison term. Police officials were present throughout her recent interview with IWPR, occasionally interrupting her.

Anbaki has the hardened manner and dark complexion of a woman who grew up tough in the Iraqi countryside. She showed no emotion as she described her past.

She said she was heavily drugged before being fitted with a bomb and was unaware of her actions.

When her husband spoke of seeing her in heaven, she did not understand what he meant but felt only that “something strange was about to happen”.

However, the security forces in Baquba question whether she was really coerced into becoming a bomber. After being arrested in the city centre in August 2008, she argued with the policemen, haranguing them as “traitors”.

The Sunni Arab insurgency has maintained a stubborn grip on Diyala, despite a sharp reduction in violence over the last few years. The province lies north-east of Baghdad, along the porous border with Iran.

The violence has deepened fissures in the province’s mixed population, which is divided by sect between Sunnis and Shia, and by ethnicity between Kurds and Arabs.

Of the 60 major suicide attacks recorded in Diyala since 2003, 23 were carried out by women.

As in other parts of Iraq, women are thought to have been favoured by the insurgency because they initially attracted less attention than their male counterparts.

Social norms prohibited men from frisking women at checkpoints, while the recruitment of female officers was at times unable to keep pace with the supply of bombers.

Security officials say groups such as al-Qaeda manage sophisticated networks of female suicide bombers in Diyala, often with the help of older women.

The best known of these handlers was Samira Jassim, nicknamed the “Mother of Believers”, who was arrested in early 2009. According to the Iraqi military, she had persuaded 80 women to become bombers, of whom 28 went on to launch attacks, many of them beyond the province.

In a filmed confession, Jassim said her recruits had been the victims of rape or violence, and became convinced that becoming a suicide bomber was a means of vengeance or redemption.

Anbaki is one of five women currently in custody in Diyala who did not complete their mission.

In common with other female bombers, she has lost male relatives to the conflict – her father and brother were kidnapped and killed by militiamen in 2006.

After their deaths, she was forced to marry her cousin, a blacksmith. Though she said she was unaware of his links to the insurgency, she knew him to be fiercely religious.

“I used to like singing and I dreamt of becoming a teacher,” she said. “After marriage, my husband forbade me from listening to songs.

“He used to read the Koran a lot and spent many days away from home on some or other pretext. I became lonely.”

When Anbaki asked him to buy a television, he refused, saying it encouraged infidelity and devil worship. When he found her listening to an Arabic song on the radio, he flew into a rage.

“He smashed the radio and gave me a thrashing, all the while explaining how my actions would send me to hell,” she said.

The couple lived in the village of al-Mikhesa, outside Baquba. They had no children and Anbaki said she was not allowed to make friends. One day in the third year of their marriage, her husband took her to the nearby district of Al-Ghatoon.

“It was just like a dream,” said Anbaki. She said she was introduced to a relative of her husband, a woman in her forties who gave her name as Um Fatima.

They exchanged small talk and Anbaki was served a glass of peach juice, which she recalled made her feel “weak and dizzy”.

Barely conscious, she said she was fitted out by her husband and Um Fatima in a vest packed with explosives.

“My husband kept talking to me about jihad. Um Fatima left us in the room and he kissed me on the forehead.”

Drugged and dressed in a suicide vest, Anbaki said she was escorted into Baquba by Um Fatima. The women went to a marketplace, where they ended up being separated by the crowd.

Anbaki said she was stopped by a member of the Sahwa, a Sunni Arab militia that has joined the government in the fight against al-Qaeda. When she gave her name and said she was going home, the militiaman became suspicious as he did not recognise her family from the neighbourhood.

The Sahwa member raised the alarm and the security forces cordoned off the area. Anbaki said she was ordered to remove her cloak.

She did so, revealing the vest packed with explosives. She was immobilised and the device she was wearing was disabled by an expert.

Anbaki insists she did not know how to set off the bomb and assumed it was controlled remotely by Um Fatima, whom she had lost in the crowd.

“I was pretty sure I had no detonator. My husband didn’t teach me how to use one,” she added.

Nor is Anbaki clear what her intended target was. “Maybe the operation was against the crowd in Diyala market, but it failed because Um Fatima lost sight of me... Maybe the target was a checkpoint, or an official or a leader,” she said.

However, the security forces in Diyala believe Anbaki’s device was attached to a trigger and she was either unable or unwilling to detonate it.

The would-be bomber said she did not act of her own accord and would not want other women to follow her path.

“I didn’t know what was going on,” she said, explaining that she now feels “shame and regret”.

“I implore any woman to think a thousand times before committing such an act. It runs counter to our faith, which calls for love and tolerance,” she continued.

Um Fatima and Anbaki’s husband were arrested on terrorism charges and remain in custody. Anbaki’s mother was also detained, but has since been released.

Attacks by women bombers have decreased over the past few years, partly as a result of the recruitment of women officers to carry out searches at checkpoints.

Wijdan Adil, the head of a battalion of women recruits to Diyala’s security forces, said many of her officers worked in plainclothes.

“Our girls work as secret agents, undercover in parks, markets and crowded places. They also take part in raids carried out by the security forces,” she said.

Colonel Jalil al-Jiburi of the Diyala police force said women who became suicide bombers were driven by “revenge, poverty and a lack of cultural and religious awareness”.

He said many of the women had been led to believe unquestioningly that they would go to heaven as a result of their actions.

Ali Mohammed is an IWPR-trained reporter in Baquba.